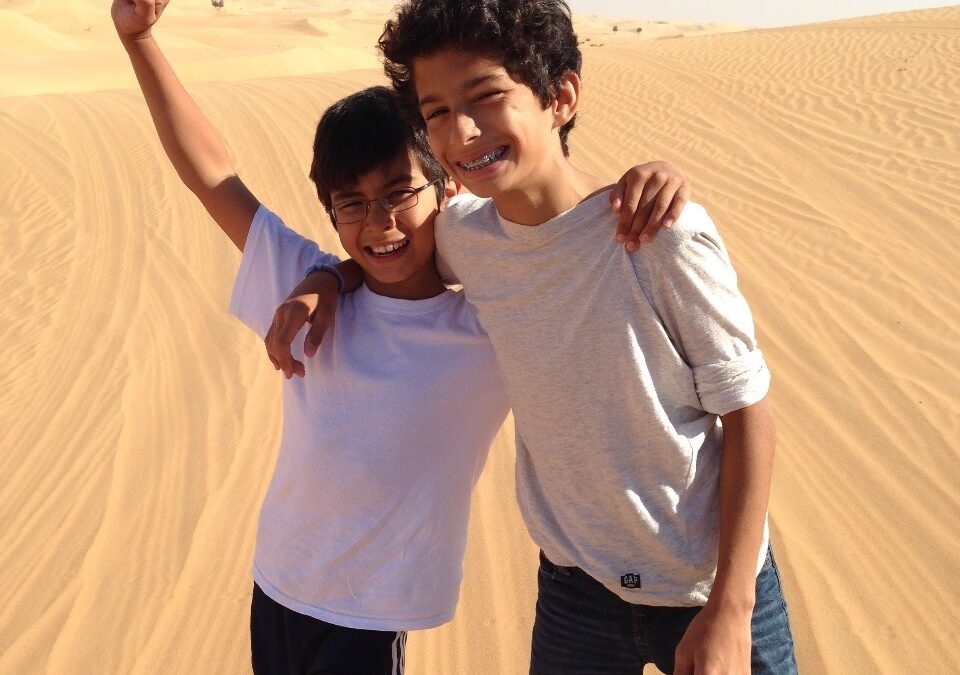 “Abu Dhabi is a great place to raise kids,” said the repair guy in our New York apartment building, about a month before we shlepped ourselves and our two kids halfway around the world. “My brother and his family love it there,” he added.

His words surprised me. Everyone else we talked to worried about our safety; my father-in-law kept asking if we’d made our wills.

That was ten years ago. The repair guy was right. It is safe. I never lock my car; I leave my purse on the table in the coffee shop when I go to the bathroom.

We moved for what I thought would be a year of Big Adventure—but we’re still here and it has been, on balance, a great place to raise kids.

Or at least, that’s my perspective. My kids, who were 7 & 11 when we moved here, have a different view: it’s the most boring place; there’s nothing to do; it’s so hot. Maybe their dissatisfaction is age-appropriate: other than those kids who live in glittery cities like London, New York, Hong Kong, does any kid in the years just before university like where they live?

What I see and my kids can’t, because their ten years here is all they know, is that their center of gravity has been forever shifted. They’re mixed-race American kids who grew up in “Arabia” and went to a British-style school, which meant GCSEs and A-levels and needing boots to play football on a pitch (translation: cleats to play soccer on the field). A mishmash, in short. Not quite third-culture kids but not not third-culture kids.

It’s true that if you live in a big city in the US or Europe, you’re likely going to bump up against other cultures, ethnicities, and languages. As Westerners living in the non-West, though, the learning, or maybe the un-learning, comes from living as a guest, living in a place where yours is not the dominant experience.

Because they’ve grown up in this (boring) Muslim country, my kids are comfortable with practices that are still regarded with suspicion by far too many people in the US (and elsewhere). I remember a few years back when I was about to take a gaggle of boys to the waterpark. “Just a few minutes, Mom,” my son said. “T. is doing his prayers in the other room and then we can go.”

Living in a Muslim country also means adapting to religious holidays that appear according to the lunar calendar: the birthday of the Prophet Muhammed (PBUH) had been marked on the school calendar as 19 October. . . and will now be celebrated on the 21st. Same with Ramadan: we know approximately when it will start, but the exact date depends on when the moon-sighting committee sees the new moon, which signals the start of the ninth month of the Islamic calendar.

Granted, living here also means that when the school year started, my younger son had to dye his hair back to its normal dark brown after a summer of being a glorious silvery lavender, but I think that’s more to do with British prep-school fussiness than anything else. At the American school here, kids have hair in every shade of the rainbow. I reminded him that he’s graduating at the end of this year, and then he’s got an entire lifetime to experiment with wild hair color.

The UAE is a very young country in an ancient part of the world. For the entire decade that we’ve lived here, my kids have delighted in reminding me that I am older than the country, which really isn’t as funny as they think it is. What I hope is that by growing up in a country that is itself growing up, they’ve seen how change is possible: Abu Dhabi, for example, is in the midst of an ambitious plan to transform its economy away from reliance on fossil fuel (there are a lot of Teslas on the roads here). More importantly, they have grown up with the lived experience that the US is not the center of the world. Their adolescent boredom with Abu Dhabi seems to me a small price to pay for that awareness.