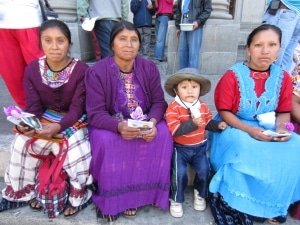 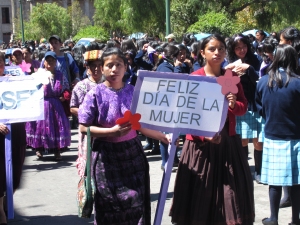 A few weeks ago, when I was in Guatemala learning Spanish and volunteering for a week, I had a special surprise. I witnessed my first ever El Dia de la Mujer (International Women’s Day), and it was an extraordinary experience.

Before heading out to Guatemala, I honestly admit that I had never even heard of International Women’s Day before. It wasn’t until I opened my email on March 8th and saw the post written by World Mom’s Blog founder/editor Jennifer Burden that I realized today was the day.

Back at home in Minnesota, I had never read any media coverage on the celebration or even knew it existed. Yet in Quetzaltenegao (nickname: Xela), Guatemala “El dia de la mujer” was a huge day. Not only was it the largest celebration of women’s rights ever to fall upon a traditionally “machismo” society, it was also attended by all walks of life. Men, women, children, school girls, Mayans, non-Mayans, foreigners (like me) and more. It was an unbelievably special day and I felt so lucky to have been there to see for myself what we western women often take for granted: Basic women’s rights.

Since I’d been in Xela, I’d learned a lot about a woman’s life in Guatemala. My fantastic Spanish teacher, Lili told me some surprising details of what it is like for most women to live in Guatemala. There are several issues regarding women’s rights that need to be resolved yet are very complicated since many problems are engrained in their Latin culture. Guatemala, like most latin countries, has a strong culture of Machismo and is very conservative. Thus, women are not always treated as equals.

Most women in Guatemala, regardless of status and/or profession, do not understand their rights or if they do understand them are afraid to do anything. Violence against women is very common and tragic. Many women suffer beatings and some are even killed if they do not comply with their husbands wishes. The murder rates are high thus women are afraid of reporting domestic violence to the police.

To further aggravate the problem, many women working at factories are exploited in their jobs earning under minimum wage and working long hours with no benefits or health insurance. They are trapped in a horrible situation and are also often sexually abused by their bosses. Oftentimes, they have to submit or else they will be fired.

Lili also told me that it is quite common for men to have mistresses that they frequent or even prostitutes which greatly puts women at risk for developing diseases or other health problems. Generally, women are expected to produce a large family and sometimes if a woman refuses or tries to use contraception, she is beaten or even killed.

Mayan women have it even harder as almost 90% are illiterate and uneducated. Many Mayan children today still do not attend school further aggravating the problem. Most Mayans are very poor and live a hard life outside of the city in farming communities and villages. Although they still maintain a rich culture that has lasted for centuries, the life of a Mayan woman is quite hard. 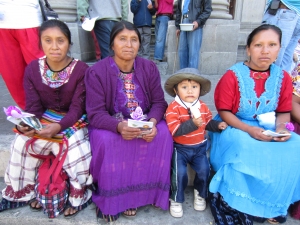 Despite the law created in 2007 to protect women against violence, little has changed due to fear and a vicious cycle of being trapped in a culture that hasn’t changed much in regards to women’s rights. If a woman is poor, uneducated and has no job along with five or six children, how could she possibly leave her husband? She must accept the violence.

On a positive note, many groups have formed to help educate women on their rights and support women who suffer mentally and physically from abuse. Women have services available at their church and at local and governmental levels, if they choose to speak out.

Furthermore, today was the largest demonstration and celebration of El dia de la mujur en Xela. There were women, girls and even men and boys all together, representing all walks of life. It is not only a Mayan problem. Violence and mistreatment of women is very common and happens to many Guatemalan women.

It is a tragic problem that will take some time to solve since it is so engrained in the culture. Lili believes that boys and girls must be educated at a young age that they are equal and they must treat each other with respect. That is the only way that women will ever have equal rights. Let’s hope all women can have the same rights as men and be treated fairly with kindness and respect!

It was a beautiful day of celebration which went well into the night with song and dance. To see such solidarity among women was quite an amazing experience. I hope that women in Guatemala and around the world can have a better life without violence, lack of respect and suffering. All women are created equal to man and the world will be a much better place when women receive the respect and rights they deserve.

Do you observe International Women’s Day in your country?  What rights are missing from women’s lives?