ISRAEL: Television Is Ruining Our Happiness 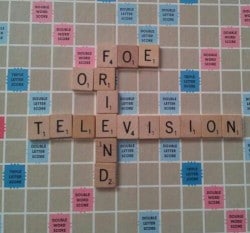 I have a love/hate relationship with TV.

I either love it, as in addicted and couch potato like. Or I hate it, as in I want to throw the TV out of the window and never bring one back into my house. Unfortunately, my husband is addicted to his sports teams so a television free household is not even a remote possibility. Hubby is staying, so the TV is staying too.

I have to admit, at times, television does have its attraction.

Not only is it a free babysitter (well not really if you have cable TV) but it is entertainment that requires no energy or input from you. You sit there passively and just watch. You don’t really have to do anything, except for occasionally laughing or crying.

For many, television is a way to unwind and forget about the stresses of your day. I know because I too am often guilty of vegging out in front of the TV and wasting (unwinding) for hours upon hours.

Of course there are programs I love. Like my recent addiction to Grey’s Anatomy. And as much as I love it and enjoy it, I had a Grey’s Anatomy related Aha! moment about television.

Television is ruining our happiness.

I am not talking about our kids (and ourselves) being influenced by all the commercials and their marketing. I’m also not talking about the fact that instead of interacting with each other we sit and stare at a screen. I’m not even talking about all the violence or inappropriate subject matter our kids, and sometimes we ourselves, are exposed to.

What I am talking about is that television promotes a romanticized picture of life. We catch snippets of “lives”. Snippets that only tell a very small part of a picture-had we been talking about real life and not a show.

Who can compete with the action, the romances and the heroism on a show like Grey’s Anatomy? All the good and the bad is accentuated. Heck, our love lives would look like Meredith and McDreamy’s if all that was “shown” were our tender, loving, passionate, heartbreaking and heroic moments. But regular life happens. ** And we do argue about little things like laundry and dishes and how to raise the kids. And we can be petty and it doesn’t look as “nice” as the petty fights we see couples having on TV.

Things are also so much clearer on TV. We are shown the cause and effect. Things are highlighted. Things are made clear at some point or another.  Things are zoomed in on and when there is a “scene”, the three million other things that are happening in your daily life are not really important.

The worse is the fact that unlike real life, every last word on a television series is scripted. The words gone over and over again by high paid and trained writers. How many times in life have we wished that not only our words but our partner’s words were scripted to come out just right? I know I have had whole conversations with my husband….in my head. And when it comes down to having that conversation in real life, at times, it’s a total bust because it didn’t go according to the script in my head.

That very script that is written because of our influences from television. The script that needs to be tied up in a pretty bow by the end of the show.

Television is ruining my life because it has been creeping into my consciousness and making me romanticize how life should be, how it should look and how I should act and how people should react to me. It makes me feel like my life is inadequate and pale in comparison.

What about you? Does television make you feel like your life is less than adequate?

**And on a side note. The elevators in Seattle Grace Hospital (Grey’s Anatomy again) must be really really really slow. I laugh every time there is another long elevator scene because some of the characters’ longest conversations seem to happen in those elevators. Realistic and mirroring life? I think not.

This has been an original post to World Moms Blog by Susie Newday of Israel. You can find her positive thoughts on her blog, New Day New Lesson.