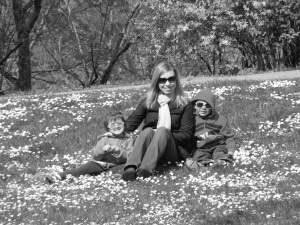 Where in the world do you live and are you from there?

I live in Lagos, Nigeria, and I have lived here for almost three years. My two children, husband and myself moved here in July 2009. I am not originally from here. I am from the United states and grew up mostly in Illinois.

What Languages do you speak?

Does Dora the explorer Spanish count??? 🙂 I am sorry to say that I really don’t speak another language other than English (and a few phrases in Yoruba). In my defense, I did take Spanish in high school and Italian in college.:) English has become such a global language. When I travel, I always make a point of trying to learn a few phrases in the native language. It never fails. I will ask a person a question in another language and he or she always will answer me in English…no matter what country I’m in. I have just never really lived in a place I had to really learn a new language. The official language in Nigeria is English.

When did you first become a Mother?

I first became a mother on August 24, 2005 ( I was 29) when I received a phone call from my adoption agency while teaching my kindergarten class . They told me a baby boy had been born in Guatemala City, Guatemala on August 18, 2005. My husband and I had tried for so long to become parents and that time had finally come. I’ll never forget that moment!!!!:)

Are you a stay-at-home- mom or do you work?

I am not really sure how to answer that question. I am a mom who stays at home and that’s work. I was a kindergarten teacher for seven years before we brought our son home, and after that, I became a stay at home mom and I haven’t ever regretted it! I love to be able to be with my kids and watch them grow. Although, a glass of wine every now and then helps,too!!!:)

I started to write my blog in April 2009 when my family first learned we were moving to Lagos. I started it as a way to show my friends and family what we were doing and what things looked like over here. But, somewhere along the way, writing my blog became a way for me to reflect on things I have seen and done here in my everyday life. If I don’t write a post in my blog for a few days, I can tell. Too many ideas and thoughts start to roll around in my head and I have to get them out. Writing, for me, is a way to make sense of what I see and do each and every day.

I guess one way I am different is that I have experienced motherhood two different ways: biological and adoption. I have struggled with infertility, and only someone who has been through infertility can truly understand the pain and heartbreak one experiences. We brought our son home from Guatemala in March 2006. Then, I gave birth to my daughter in 2008 after becoming pregnant by surprise after doctors told my husband and I that we had a less than one percent chance of ever becoming pregnant. I have seen both sides of the coin…adopting and having a biological child. Both ways to create a family are miracles in ways which are totally different from each other. But, there is no way that I could love one more than the other. Both of them are pieces which make our family of four complete.

One of the biggest challenges in today’s world is “ how to let go.” When many colleges are offering sessions to parents of college freshmen tips and ideas of how to let their children be independent and make their own choices, you know that the age of hyper parenting is definitely upon us.

It used to be parents would let their kids go out by themselves to the park, and now there is always a small gasp if a child under the age of 12 is seen out alone …unsupervised.:) I remember when I was little getting on my bike and riding with my friends to the playground at a nearby school and playing with my friends for hours. My mom wasn’t right there with me, and I had to figure some things out on my own. Today, there is fear of kidnapping and things are so competitive and children (and parents) are so involved in so many things. Sometimes I wonder if some children want to do so many activities or if their parents are pushing them. Will I or am I doing that to my own children? How do I learn to let go and let them “struggle” a bit to find their own strength to deal with life ?

Technology is also a huge challenge in regards to raising children. It changes so fast…not just year to year, but month to month! There are so many gadgets (iPad, DS, cell phones, iPod). The children don’t even have to have a face to face conversation with anyone…almost ever! I worry about my children having proper social skills to even carry on a conversation. If all I get is text messages from my children when they go off to college, I’ll be in my car driving to their dorm rooms demanding a conversation from them. Wait a minute…that is exactly what I was saying I wouldn’t do in the first paragraph!!! LOL!!!:)

How did you find out about World Mom’s Blog?

I was reading another blog and saw the WMB button, I clicked it and loved the site. I think it is incredible to have so many moms from all over the world come together in one place to share their experiences and I wanted to be part of it!:)

This is  first-time, original post to World Mom’s Blog from our new writer in Nigeria and mother of two, Meredith.