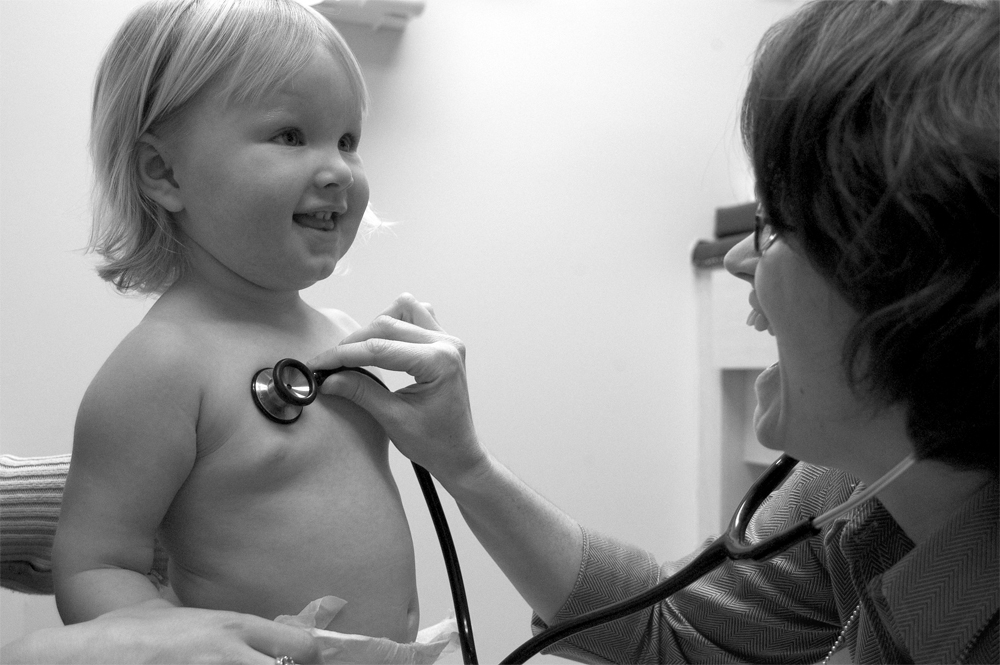 A few weeks ago we had a rough day at the doctor’s office. Our twin four-year-olds needed a routine medical check up to apply for school next year so we set up an appointment at the nearby international health clinic. To ensure that I’d leave with filled-in forms – and given my son’s tendency toward noncompliance in medical settings – I spent a few days preparing them for the big event.

We talked a lot about what would happen at the appointment and why it was important. I also banked on a bribery strategy and took the kids to the toy store the day before to pick out craft activities that we would do together after a successful check up.

The exam began and both kids were doing great and cheering each other on: “you’re doing a good job!” said one to the other. Then it was time for the required Mantoux TB skin test – an injection of Tuberculin beneath the skin on the inside of the left forearm.

My daughter cheerfully agreed to go first. Her smile quickly gave way to a frozen look of shock and then abundant tears: “it huuuurts!”

After watching his sister, my son hid behind a chair crying and refused to go next. I didn’t blame him but I also didn’t want to repeat the whole experience another day. After a few minutes of attempted persuasion I turned to the waiting doctor and nurse and told them that I wasn’t sure what to suggest. They offered to bring in more people and hold him down. “Uh, no. Give me a minute.” I said.

I did my best to be patient and calm and explained why we needed to do it today. By some miracle, I convinced him to climb onto my lap and he stoically stretched his arm out as I tried to distract his gaze.

For the next 20 seconds he screamed the place down. I’ve never heard anything like it. When it was finally over we both exhaled palpable relief.

No one made eye contact when the three of us walked back into the large waiting area. We spent a few minutes collecting ourselves, comparing stickers, and talking about how brave they had been. And they WERE brave: my daughter, who had offered her arm up without knowing what would happen, and my son, who offered his when he knew exactly what was coming.

They showed off their “big pokes” and explained what happened to the woman waiting next to us. “Yes, I heard” she said with a smile.

I have always dreaded the injection part of check ups and usually begged my husband to be the child holder while I handled the post-jab cuddles. Now that they are older, restraining them isn’t an option. This is a relief in many ways, but reasoning with them is just as hard (or harder).

For me, it is also about respect. While my daughter is game for most anything, my son needs time to ease into things. He will participate when he is ready and when it is his choice. Although I could have done with some earplugs at the doctor’s office, it felt important to respect my son’s free will and not force anything and I was proud of how the situation turned out.

So far our doctor experiences have been mostly mundane and limited to check ups and minor ailments. But you never know. Many brave parents face far greater medical challenges than yearly injections or the virus-of-the-month and I feel deep empathy for these families. And of course, as I’m learning through the UN Foundation’s Shot@Life campaign, many parents and children don’t even have access to yearly shots or life saving vaccines at all. So even though the small traumas stick with us and set precedence for future visits, at least we are lucky enough to have access to good medical care and services.

Though I don’t know when we’ll visit the doctor again, there are bound to be more medical appointments (and needles) in our future. One thing I am sure about: next time it’s my husband’s turn.

How do you help your children cope with doctor visits? How do you cope?

This is an original post to World Moms Blog by Shaula Bellour in Indonesia. Shaula can also be found on her blog, Notes From a Small World.

Photo credit to dmason. This photo has a creative commons attribution no derivatives license.