SINGAPORE: The Sibling Relationship Begins in the Womb 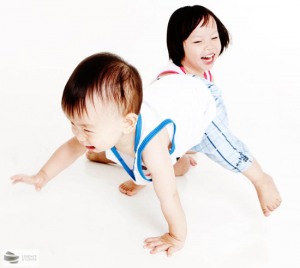 The sibling relationship begins even when the younger one is still in the womb.

When I was carrying my second child, Javier, I began to introduce Vera, my first-born, to the concept of a younger sibling.

The day we discovered that the baby was a boy, we told Vera she was going to have a ‘di-di’ (little brother in Chinese) to play with, and that they would have loads of fun together.

Being the chatty 2.5 year old that she was at the time, she relished the thought of having a captive audience, and she would thoroughly enjoy talking and singing to my womb, or rather, the di-di who was stuck inside.

At first, I gave her the words to say, such as ‘I love you, di-di’ and so on. Thereafter, her creative self took over and for the remaining 4-5 months of the pregnancy, I think she pretty much dominated the airwaves where her little brother was concerned.

When I reached the last few months and my tummy was too big to carry Vera, I explained to her that I couldn’t carry her because of my aching back, and not because of her baby brother.

(I had read in a book somewhere that we should try not to ‘blame’ the baby sibling or use him/her as an excuse when you have to make changes in the way you interact with the older child.)

At every opportunity we had, we spoke positively about the baby’s arrival, focusing on the fun and love that he would bring into the family, hoping that she would also look forward to his coming.

In Singapore, we have this tradition of buying a little gift for the elder sibling, and presenting it to him/her at their first ‘meeting’. (I didn’t know if it would really work, but the idea appealed to us anyhow.) So we prepared a small gift – a Hello Kitty ink-stamp and some hair-ties for the little lady – and we brought it along to the hospital when I delivered.

We tucked the gift box in the baby bassinet before the family arrived at the hospital. And we presented it to Vera, saying, “This is a gift from your baby brother. He loves you very much.”

She was absolutely taken by the stamp, and didn’t really bother much about the wailing baby. Even after a few months down the road, she could still remember what her baby brother ‘gifted’ her, and we knew then that it had made an impact somehow. I guess first impressions do last.

I’ve also noticed that since the early days, baby Javier would turn or look more alert whenever his sister came into ear-shot. And as he grew and could interact with us more, it became obvious that he really adored his big sister. It was like she lighted up his room each time she came in! I think it has got to do with the way she kept singing and talking to him when he was in the womb.

Sure, kids being kids, there is constant fighting over toys (although Javier is just turning one, he’s proving to be able to stand his own ground), and the occasional jealousy and insecurity manifesting itself in different negative forms of behaviour, but I do see that there remains a soft spot in Vera’s heart for her baby brother. Some would say it’s a gender thing but I think it goes beyond that.

For me, I just keep praying over this budding sibling bond, and I try my best not to compare the two (It’s the same whether they are in the room or not, because you know kids, they will have their ways of listening through the walls.)

I’ve also shifted Vera from a full-day childcare to a kindergarten, so that they can spend more time together at home. I love to watch the kids at play, especially now that Javier is more expressive too. The big sister has also learned to help out in simple chores, and is always happy to be involved in taking care of her baby brother.

The best part for me is when I see Vera getting better at giving up her toys to Javier, as she slowly understands how to show love and kindness to her younger sibling.

How did you prepare your older children when you were expecting? How do you establish an environment that allows your children’s relationships with each other to thrive?

This is an original World Moms Blog post by June Yong in Singapore.  June blogs over at mamawearpapashirt, and can be found on Twitter, and on Facebook.

The photo used in this post is credited to Essence Studios.