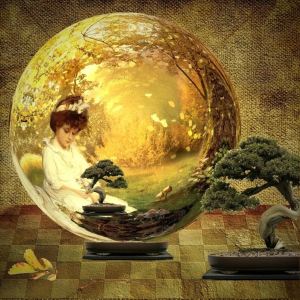 “If you had a crystal ball and could see your child(ren)’s future, would you?”

The Alchemist of India writes:
“Oh yes, definitely. I am always curious to know about my son. He used to say he would grow up to be a pediatrician and abolish shots. Now he says he is going to be a ‘robot scientist’ and build transformers (of the Transformer movie) and fly to and fro to the other planets. Oh man, I would love to know if he does that eventually.”

Karyn Van Der Zwet of New Zealand writes:
“No. I am looking forward to seeing how their lives pan out, but I want to enjoy the journey too. :)”

Mamma Simona of South Africa writes:
“I agree with Karyn, it would be like reading the last page of the book before starting at the beginning … it would just spoil everything. I trust that everything will unfold as it is meant to :)”

MamaMzunga of Kenya writes:
“Great question, but no way. Probably because I’m terrified there’d be some tragedy. I’m depressing like that. Plus, if there was something sad, I’d want to change it.  Then we’d have to get wrapped up in the metaphysics of changing one’s destiny and that is just too much to think about on this much sleep deprivation. ;)”

Hamakkomommy of Japan writes:
“I don’t know that I’d like to see their futures, but I would like to sit down and talk with them about what I’m doing as a parent now. What was good, what was bad, what was just plain awful and scarred you for life?”

Ms. V of South Korea writes:
“Hmmm. It would be very tempting, but no. I have a hard enough time staying in the present moment.”

Tara B. of Washington State, USA writes:
“Oh how I would be curious! Especially thinking about things I might see that will probably be beyond my time living on this planet….like my sons playing with their own grandkids. But I have to say no. I’d rather let things unfold day by day and focus on the beauty of the here and now.”

Nicole Morgan of Florida, USA writes:
“It’s a scary thought really – like what if they are in prison, and you start watching their every move to see where they go wrong … sneaking cookies will turn into a felony.  ok, but am obviously hoping they will not be in prison ;)”

Maman Aya of New York, USA writes:
“It would be so tempting, but I would have to say no.  I believe in everything happening for a reason, and if I saw something that I didn’t like I would try to change it….actually, maybe that wouldn’t be such a bad thing after all :-)”

Meredith of Nigeria writes:
“I think I would have said yes before I had kids when I would dream of what my future children would become. I know that sounds weird, but actually having kids, I realize that there are so many very poignant moments I share with my children when I am only in that moment (It doesn’t happen all the time but when it does, I am only there with them. I’m not thinking about anything else). If I knew what would happen and I didn’t like it, I don’t think I would have those moments anymore because I would be too worried about trying to change something. And is that really life if you already know what will happen? Life is all about learning from mistakes and dusting yourself off and trying again and always having that hope and wonder about what lies in the next day.”

Mannahattamamma of United Arab Emirates writes:
“It IS tempting!  Can I do anything about what I see (i.e., if they are going to prison can I start making them do charity work now and forestall that?)…or is it just: here’s the future and BAM that’s that? If so, then I wouldn’t want to know because what if something terrible were going to happen? I think ignorance is bliss at this point!”

EcoZiva of Brazil writes:
“Tempting, but scary too!  I don’t think so.”

Lady E of Indonesia writes:
“NO WAY!!! If I knew his future, I might try to create it/alter it.  Basically, I wouldn’t be able to know what it was and not interfere with the natural plan of things. :-)”

Kirsten Doyle of Ontario, Canada writes:
“I’d want to know if my son with autism was going to be the target of the bullying experienced by many special needs kids, so I could help him prepare and protect himself. Other than that, no.”

Jennifer Burden of New Jersey, USA writes:
“Only if I was dying, and I couldn’t be on earth to see it. Maybe that would be my last wish. :)”

What about you… If you were given the opportunity to peek at your child(ren)’s future, would you?

Don’t forget to come back tomorrow to peek at the travel itinerary for next week!

Photo credit to Marie http://www.flickr.com/photos/ozstuff1/5820019896/ .  This photo has a creative commons attribute license.