FRANCE: We Do What We Can 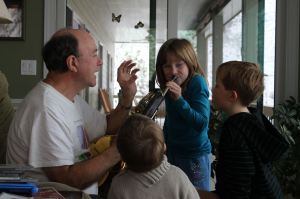 Author’s father with his French grandchildren

I am not an ex-patriot, technically speaking. When my ten year resident visa expires in three years I’ll be taking the test to become a citizen of France—well, actually, a dual citizen of France and The United States.

For one thing, it’ll be easier that way not to have to endure the bureaucratic process of renewing my resident visa, even as seldom as once every ten years. For another thing I will be able to vote in both countries, and as I am living here, the politicians elected and the policies implemented will affect my quality of life; in that I want to have a say.

And then there’s the fact that I’ve sort of become French.

I wouldn’t go so far as to say I’ve perfectly mastered “the pout” or have the art of dining in a moderate and lively way under my (tiny little designer) belt. I may also stick out like a sore thumb in the schoolyard with my friendly waves and “bonjours” accompanied by a big smile, even after all these years.

But I’ve grown accustomed to the French reserve, the usage of the formal “you” until time and circumstances permit. It has become my way as well. I’m comfortable in my role to play as a foreigner in a small community where I can bring a sense of neighborliness, and my highly sought-after English classes that introduce a good and playful start to the language for those who desire it.

An English friend of mine has three grown (or nearly grown) children and she once told me that if anything happened to her husband, she would stay in France. Her life and roots are here now.

Another American couple I know have both gotten French citizenship and reside in France even though both of their children have gone off to the States for college and work. The husband told me that after twenty years of living here, people in the States ask him where he’s from. And when the clerk at the grocery store droned out “paper or plastic,” he had to ask her twice what she meant, so unaccustomed was he to the small cultural habits taken for granted in his absence.

I can relate to that lifestyle choice – to stay.  I think some people become ex-pats kicking and screaming. They just happened to fall in love with someone from a different culture and the obvious choice is sometimes to follow them there. Others were brought up with a great appreciation for the big wide world, and a sense of independence that propels them straight into it.

The latter is me, and largely thanks to my parents’ influence. I wanted a foreign husband and I wanted bilingual children; I am living my dream.

However, not everything about my choice is perfect.  I never considered just how hard it would be on my parents to have to settle for a long-distance relationship with their grandchildren, and that it would bother me so much as well.

I didn’t consider that one day there will be the stress of not being present and able to take on the day-to-day care of aging and ailing parents (a situation still thankfully far off). The excitement of living my dream has its costs as well.

I don’t have any solutions; we just make do with our situation. Our family has to travel in peak season because of school, which means that the tickets of our three children are nearly as pricey as ours. A vacation budget of 5,000€ minimum each time does not allow for us to make the trip every year. Fortunately my parents are adventurous about visiting Europe and eager to establish a relationship with their grandchildren, so they make the effort to come at least the years we cannot travel, if not every year.

So that in the end, for now, we do what we can. The future will have to worry about itself.

Photo credited to the author.