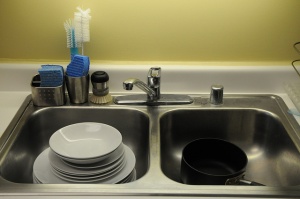 Before moving to Kenya, along with updating our vaccines and strategically packing our belongings to fit our meager bag allowance, one of the things I prepared myself for was the possibility of having house help.  Both my husband and I would be working and we’d be living in a rural area, so we’d need someone to help look after our son.  And unless I wanted to spend 20 hours a week washing our clothes by hand, we’d need to hire some house help. I’m not exaggerating when I say I hated the idea.

More than anything I hated the prospect of putting someone in, what I thought, was a subservient position and, if I’m being honest with myself, bringing someone in who would be a continual reminder of the uncomfortable inequities of the world.  Someone who could see what we spent on things like groceries and petrol and compare that unfavorably with her monthly salary.

And coming from the US, there was probably something in the recesses of my subconscious that was reflexively uncomfortable with being a light skinned person hiring a darker skinned person to clean my unmentionables.  It’s a relationship loaded with historic and cultural baggage.

I was about as uncomfortable with the idea of taking on house help as I was with the very real possibility of my family getting typhoid and malaria.  It’s true.

But, when we arrived in Busia, I was smacked with the economic realities of the situation.

People were lining up to ask to work for us.  Unemployment is enormous and paying what to us seems an exploitative salary is twice what someone might earn otherwise. Not hiring someone would in essence be denying someone a job – a job we could afford to pay and a job we needed done.  It would be irrational and unfriendly.  So, I had to quickly become comfortable with the situation.

I’ve come to learn that there are little of the same connotations about house help here in Kenya.  People who are just above poor tend to have some form of house help.  Maybe it’s a cousin from the village who helps around the house in exchange for more meals and a more comfortable bed than she would otherwise have.  Even the lowest paid staff in the small NGO we work at had house help.  In more affluent cities even the house help have house help.

A good friend of ours in South Africa grew up with a mother who worked as a “domestic.”  The job allowed her to put him through college and keep him out of trouble.  He now works as an HR manager for a large company.  He has all the trappings of an upper middle class existence.  And he was baffled by my discomfort with house help.

But over the last two years I have become more comfortable with the arrangement.  We’ve found people to help us who we’ve come to love.  They do the work with pride and dignity and have been able to send their kids to school, buy land and build houses because of their jobs.  I’ve come to find out that both women who’ve worked for us had previously been abandoned by their husbands, so the work was a lifeline for them.

Since the birth of my second child, I’m no longer working.  For the time being.  So, Mary* and I are home together all day – a situation I would have at one time thought unbearably uncomfortable.  But it’s not.

We share lunch sometimes, play together with my 3 year old, and occasionally sit outside together and gossip about mutual acquaintances.  She gives me insights about things like village life and gender dynamics that I would struggle to otherwise uncover.  We pay her twice the going rate and for her daughter to go to college and make very few demands on the particulars of the house.  Like most liberal-minded expats, I believe we are fair and generous and I consider her a friend.  I have no way of knowing if the feeling is totally mutual. I hold all the power in the relationship.  I won’t delude myself that she feels as part of the family as it feels to me.

I’m still not totally at ease with having someone working in the house. Maybe I never will be. But I no longer feel as I once did.

I work(ed) for an NGO that tries to assess and scale up anti-poverty interventions.  Sometimes I wonder, as do most NGO workers, what kind of impact we are ultimately having.   But one thing I’ll know when we pack our bags for our next phase of life, is that in the very least by being here we helped someone by giving them a job and treating them fairly.  It’s not exactly a recipe for solving world poverty, but it is a recipe for putting my privileged discomfort with house help into proper perspective.

What are the connotations of hiring house help in your neck of the woods?   Have you ever felt uncomfortable about hiring someone to help you out?  How have you come to terms with it?

This is an originapost from  Mama Mzungu. You can also read about her ex-pat adventures on her blog Mama Mzungu.