BRAZIL: How Not to Get a Dog – A Tragicomedy with a Lesson 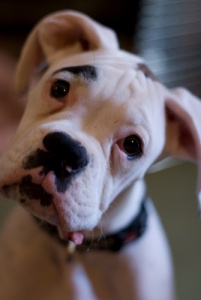 It was the night before New Year’s Eve when my husband received the call. “I don’t know whether she’ll agree,” I heard him say. He hung up and said it was his godmother, who had invited us to come over for dinner. She also had a gift for our son. “Go with your heart open,” he told me with a smile.

I immediately thought it was a TV set or a videogame. Since, by choice, we have neither at home, people are always trying to give our son one or the other because they feel we are depriving him of two very important things.

When we arrived there was a table covered with fine cheeses and cakes. After a while, the godparents finally convinced me to have a bit of wine. I had stopped all alcohol since I found out I was pregnant and that continued because of breastfeeding (by this time the baby was almost one). The two glasses had quite the effect on me. Soon I was drowsy and slightly disoriented.

My husband’s godparents have two dogs and had apparently got a third one: a boxer that, despite only being a few months old, reminded me of a small calf. I noticed they were especially enthusiastic about the new dog, and were continuously recounting all of his wonderful qualities. Even their teenage daughter, who usually does not mingle much with the adults, was all smiles and would compliment the dog.

Still, I suspected nothing. In fact, I had completely forgotten about the mysterious gift. Later, when we started getting ready to leave, the godfather said, “So, are you taking him?”

“Huh?” I had no idea what he was talking about. My husband reminded me about the surprise gift and explained to me about the dog, which apparently was having trouble finding a home.

“He has gone through three homes, the poor thing. He is a saint. We tried too, but he just isn’t accepted by the other dogs”, said the godmother. “Give him a chance; keep him for a few days as a tryout”.

I was tired (and dizzy). The baby was cranky. The dog looked at me with his big, liquid eyes. Our son said the famous, “I’ll help take care of him” and my husband (who is completely freaked out by baby poop) said he would clean up any mess from the yard. “Okay,” I said, thinking of a three-day tryout.

I really don’t know what got into me to agree. First of all, at the time, our house had no infrastructure whatsoever to receive a dog, much less a dog that size. For one, we did not have an appropriate fence and we had left the front gate open for so many years that it would not close anymore. In any case, he could not sleep outside – what if it rained? There was no doghouse. The house, on the other hand, was not appropriate either, even for a short period of time. It’s a bit hard to explain, but basically the kitchen, living room and terrace are all open and lead to a piece of forest (i.e. only the bedrooms can be locked).

We decided to temporarily keep him with a long rope on his collar. At first he did seem like a saint, he did not even bark! Then, during the night, he started destroying anything within reach. One unforgettable time he somehow got everything out of a cabinet we kept in the terrace (at this point we had removed everything else, and I still don’t know how he reached this particular cabinet!), shredded it all, and pooped and peed all over the stuff.

After several other weeks full of such memorable events, we had a doghouse built and the front gate fixed, which meant I would finally get some peace. That, however, was only the beginning. With the whole front yard to himself, finally free from the rope, he discovered my beloved plants and wrecked havoc. Not to speak of the poop collection that my husband still “forgets” to pick up. More recently, he learned to flee through the side fence into the neighbor’s house and scare the heck out of people – although as docile as can be, he still is huge, and people think he will bite.

For the sake of our son, I tried. I took him daily on walks and told myself he would behave better as he got older. He didn’t. In fact, he knocked over our girl’s stroller once during a walk, trying to run after a cat.

His latest feat was the last straw for me. He uprooted my delicate pomegranate tree, which took several long years to reach my waist. That was when I finally told my husband, “Either you get someone to train him and pick up his poop, or you’ll have to find him a new home.”

The next day my husband said he had found a new place for the dog. I was surprised – I didn’t expect him to cave so easily. I began questioning if it was the best solution for all. Although my husband did find him a new home, our son does consider him part of the family, and you just don’t discard family like that (“He’s just a baby,” my son always says when I complain about the dog). What kind of example would that be? Also, we adults had the greatest responsibility in all this, we had accepted a dog when we had no adequate conditions to do so. We must now deal with the consequences.

Deep down, I wish I could go back in time and take away that yes. Although I love animals and had several pets during my own childhood (now I understand why my mom complained so much!), I had never allowed a dog in our home because I knew, in the end, I would have to do most of the heavy work. Even if my husband truly wanted to help, he is away from the house at least 12 hours a day, while I work mostly from home. And our son is only 7.

We have not made our decision yet, whether to keep him or to place him in a new home, but one lesson remains – never drink and get a dog!

Do you have pets? Have you ever have any pet problems? How did you solve them?

Photo credit to MythicSeaBass. This photo has a creative commons attribution license.