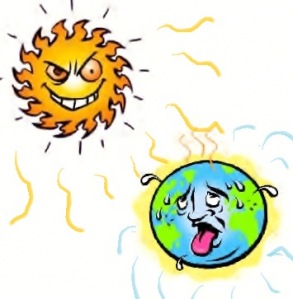 Whoever coined the phrase, ‘bright cheerful sunny day’ had not been to Chennai. Do you know what they say about the weather in Chennai? There are only 3 seasons in Chennai: hot, hotter, and hell!

Even though technically summer and summer vacation are over and schools have reopened, it still is either ‘hot’ or ‘hotter’ depending on your luck. ‘Hell’ is over with May. Or is it? It still displayed 110F on my mobile yesterday, and Chennai is the most sultry and humid place to live. Don’t get me wrong. I absolutely love my home and my life here, but it still has its disadvantages.In the beginning of summer, we decided that my son and I would spend the entire summer at my parents’ place. I was born and brought up there, and the weather is just awesome. It is located at the base of a hill station and you can find rolling plains, lush green fields, and pleasant weather with cool breeze all through the year. Heaven indeed!

But things did not happen the way we planned. I was in Chennai for two full months, getting baked at 110 F. I was not used to it. Neither was my son. I did my best to keep him well hydrated. We avoided the sun like the plague. Forget the sun blocks and creams and lotions; we never stepped out of home until after 6 PM when the sun set.

The best laid plans hardly get executed. My son got severe prickly heat rashes all over his neck and back. It was very painful – the worst for him in a long time. We tried so many coolant powders, neem leaf paste, hydrants, home remedies, but the heat did not subside and so his body did not respond. We were all going mad.

We tried to keep him in sleeveless shirts or wide round neck T-shirts, but he would often rip off his shirt in sheer frustration. Staying clothed was a pain for the six-year-old.

By the way, we do not have power in our house from 2 PM to 4 PM – the time the sun-god unleashes his maximum fury. This was subject to change every month. We were stuck to this power cut during the entire month of May. Power outages exist all over South India, and apparently the government thinks this is the best way to mitigate the power shortage. I can even show you a government time-table for the power cut schedule. It even has a grand title: Power Cut Schedules in Chennai Areas. I bet you would crack up if you are in a good mood, huh?

When school reopened, my son’s teachers were full of suggestions and well-intentioned advice about how to manage the heat, what to apply on his rashes, and what not to do.

Still rain eluded us. The heat wave did not abate. In the neighbouring state, 250 people had died due to the heat wave making me say a prayer that I was here and not there.

Some of our neighbours had started sleeping on the terrace because there were breezes during the night. The ceiling fan more walked than ran; the air conditioner refused to purr because of the voltage fluctuations. Oh yes, voltage fluctuations in the night was another of our “blessings” to include in ever-expanding list of complaints.

I wished and willed the entire night for the rains. I really needed only a few drops. I needed enough to make the weather pleasant, enough rains so that the heat abates, enough showers to sooth my son’s heat rashes.

And then, miraculously, there were few drops the next morning. They lasted for 10 full seconds. No one would believe me. Not my neighbours, not my husband, but they felt that the heat had receded. Most of them thought I had started getting delirious in the heat. Later that night, we found out that in certain areas, it did actually drizzle.

The heat is not so scorching now. My son’s rashes have become milder. I need to find some home remedies to remove the dark spots the rashes are leaving behind. His boils have vanished. It is not so hot anymore. The mercury still hovers around 100 – 105 F. But, like they say, the evil has gone from the weather. It will still take a long time for the mercury to come down to acceptable levels. But, I have to say, this sure is as close to heaven as it will get in Chennai. And I hope my son gets accustomed to this kind of weather sooner rather than later.

How is the weather like where you live? Are you and your family used to it? If not, how are you coping up with it?