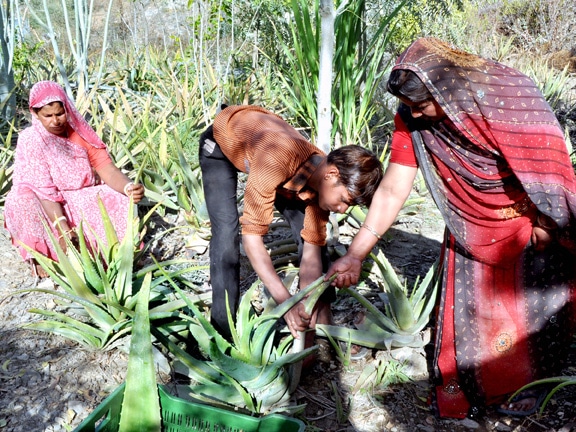 WORLD VOICE: A Village Made Into Heaven

A couple of weeks ago, we featured a remote village, Piplantri (Western India) on the Gates Foundation. Piplantri is a model village, whose actions of change have been very well received all over India. 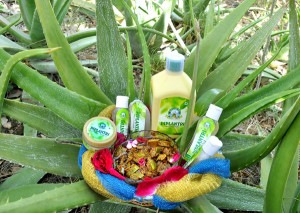 They plant 111 trees for every girl child who is born, create a fixed deposit of INR 31,000 (approx. USD 620) in her name which attains maturity when she is 18 years old and chalk up a legal agreement between the parents of the girl child and the government that they won’t get their girls married off before she is 18 years old. They also have Aloe Vera industries in which the women of the village are employed. So they have achieved MDGs #3 (promote gender equality and empower women), #4 (reduce child mortality), and #7 (ensure environmental sustainability) at one go. Today on the blog, I would like to introduce Mr. Shyam Sundar Paliwal and his wife, Anita, who were the pioneers of this change action in their village. Anita is 42 years old, and she got married after she finished her 12th grade. It was an arranged marriage and the couple were happy.

Their first daughter Kiran was 18 years old when she passed away. She died due to dehydration. That was the turning point in their life, and they vowed to make lives of others happy.

They also have another daughter Hemanshi (22) and a son Rahul (15) who is in 10th grade. Hemanshi is married and has a child, too. 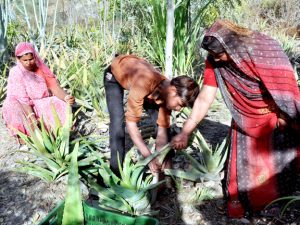 The women of the village tending Aloe Vera

Anita recalls that when she came to her in-laws place after she got married, the first lesson she received from her father-in-law was to plant banana saplings such that they bear fruits during the rainy season and then plant mango saplings around the banana trees. Banana trees absorb water during the monsoon and transfers this water to the mango trees through its roots during the arid summer season. She says she has stuck to this piece of advice to date in her village and ensured that her villagers follow such age-old farming wisdom.

Anita, who is the wife of the ex-sarpanch (ruling political head) of the village, Piplantri, is a very active community member. She is a Zila Parishad Member (Elected person of the district council). Her husband has always been supportive of her as a woman and wants her to do her best for her villagers. He has never restricted her in any way. Though she is more educated than him, he has never been jealous of her, but has only encouraged her and furthered her growth and development as an active member of their society and community. She says, if only all women of the world gets a husband like Shyam, the women of the world will be better off and we would not be speaking of women’s rights here.

Shyam Sundar won the panchayat elections in 2005 and he says he first wanted the people who worked in the government offices to be comfortable. He installed the first AC in the office, brought in some comfortable furniture and ensured that people in all echelons of the society were treated equally. (In rural India, at times, the upper caste people are given more respect and sit on chairs, whereas the lower caste people are treated shabbily and sit down on the floor. Read more about the Evils of Caste system in India here). He said, he worked on the psychology of the ruling body to make them happy and comfortable. He says, only if they are happy, they would start working on reform measures and help provide for the remaining villagers. He, at his own expense, made the offices a comfortable place to work and conducive to provide better results.

He started small. In this difficult water shortage era, he diverted the waste water from all houses/offices towards the fields. Better water conservation was ensured. If waste water does not stagnate anywhere, there would be no mosquitoes and no dengue and fewer diseases. So, he solved primarily problems with simple, cost-effective solutions.

He installed drinking RO water systems in schools. Brought in furniture for the students and made the public schools better than the expensive private schools. People started flocking towards government schools. He raised awareness slowly and in a small way, which evolved out. 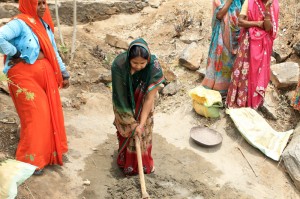 He started rain water harvesting with the help of government. He built canals. He used the women of the village who were unemployed. To the left is a picture of Anita, who at times does not hesitate to get into the fields with a mean sickle. She and her husband were instrumental in starting the water harvesting structure of the village. In most of his welfare activities 90% of the employed are women and 10% alone are men. Women of the village have been blessed indeed to have him there, says Anita. In addition to 25,00,000 Aloe Vera plants, there are 10,000 rose shrubs which are also used in small-scale industries for toiletries and medicinal supplements. Women are employed in all of these schemes. 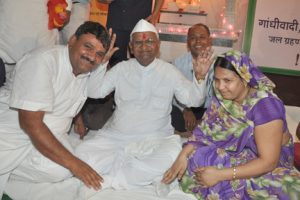 He started the Kiran Nidhi Yojna with the 76-year-old International Social Activist, Anna Hazare to ensure that no girl child is married off before 18 years old. This man who himself did not study in a college, ensures that all girl children in his village get a college degree. He also nudges the parents to get their girls married off in collective wedding, so that money is conserved and better utilised for other public welfare schemes or for their own savings. This scheme also granted government land to the parents in return for planting 111 trees on the birth of their daughter in that land, and tending to it to fruition before their girl child is 18 years old. On the death of any community member, the family is requested to plant trees again.

He says this again works on their psychology. The girl children treat the trees as their own brothers and sisters. After all, the saplings were planted on the day of their birth. And the parents get emotionally attached to the trees which came into existence on the day their family member was born or died.  They then take care of it as a family member, and would under no means cut it down. He says, it is all in the hearts of the people. If people get involved with their hearts, anything is possible. He made people to get emotionally attached to nature and trees and the earth.

I learnt something new from Anita and Shyam that day – Ecofeminism.  It is such a beautiful concept. Women and nature have been connected since time immemorial and this couple have harnessed it.

After all, he who was not highly educated could work on such things and make that beautiful village into a heaven, he says, the whole world could change too. And we would have no need to talk about the MDGs or uplifting of any downtrodden society/community.

When asked how he felt when his village was showcased by the Gates Foundation on their Blog, he gushed with happiness and pride. The district collector and Panchayat officials were so excited, too, he said. But his only complaint was that he could not get a hard copy of the magazine which he could show his villagers. He is so proud like a father, like the father of the heaven he created.

He also invites donation to his Kiran Yojna Scheme for the fixed deposit of INR 31000 of every girl child born in his village. He invites the contributors, readers and fans of World Moms Blog to make a trip to Piplantri. He wants people to embrace such change and for them to build upon it to suit their own society, and community.

What do you think about the traditions put in place to support girls and women in the community  of Piplantri?