DEMOCRATIC REPUBLIC OF CONGO: The Picture That Did Me In 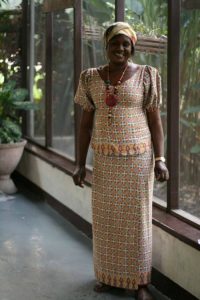 This summer our three-year-old daughter had her tonsils and adenoids removed.  Many children have this routine surgery, but we still teared-up a bit as they wheeled her away. Then we enjoyed our coffee while we waited for the surgeon to tell us everything went “just fine.”  Because we knew it would be. Even if there was a complication we rest assured in the fact that we were in the United States.

This summer Mama Youyou, our nanny in Congo, also had a routine surgery and we were scared out of our minds. Mama Youyou waited to have her surgery until we left for our summer break in the States so she wouldn’t have to take off work. (Bless her.) When she told us she needed the surgery, we did everything we could to make sure she had access to good health care.

In the weeks before we left, she started saying things like, “If it’s my time, it’s my time…” And she told me that helping her find the best doctor was pointless because her fate was “in God’s hands.” But we still did what we could. We asked around for the best doctor and searched for someone who could stay at the hospital and take care of her during her recovery. In Congo you have to provide your own food and care in the hospital.

Up until the day we left for the States, Mama Youyou had been her usual stoic self. She’s always very Mary Poppins-esque when she says goodbye for our summer break. No tears. No fuss. But this time she hugged us tight and sobbed. She really believed it would be the last time she would see us.

Fast forward a week or so later and a friend emailed us say Mama Youyou had her surgery and was recovering. Then he sent us photos of the surgery itself (!) with the operating table right next to an open window. He also sent this picture of Mama Youyou and her friend who took care of her in the hospital. 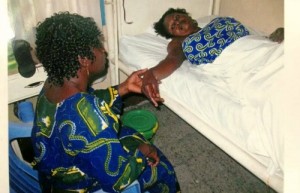 During that same week, here is an image of my daughter in her American hospital: 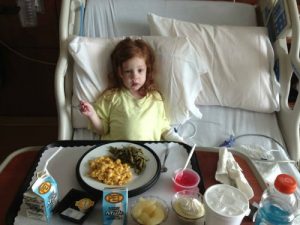 I was gutted by the difference. Besides my daughter’s balanced meal, all the ice cream she can eat, fancy bed with room for me to sleep beside her, and sterile IVs, there’s really just one difference. Access.

My daughter and Mama Youyou spend their lives together. They sing the same songs, read the same books, laugh at the same jokes. But when they are sick, one has a very good chance of dying and the other has every chance of living. Of course I know this is how it goes, but there’s nothing like a photo to make me feel every adjective for the word sad.

When we got back to Congo, Mama Youyou was out of the hospital and on the mend. Who knows if anything we did made a difference. She said her hospital experience was miserable and I could use the picture above to tell about it. Because if I’m all kinds of sad, she’s all kinds of emotions. The difference is that she was born a woman in Congo. And her whole life she’s known that life isn’t a given.

What does a typical hospital stay look like in your part of the world? Are there big health disparities where you live?

This is an original post written for World Moms Blog by Sarah.  You can find Sarah blogging with Jill Humphrey at Mama Congo.