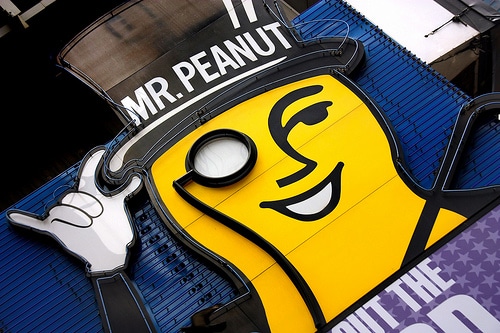 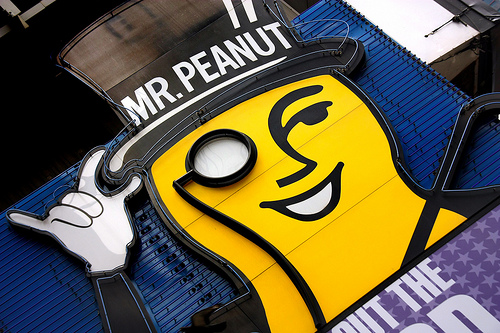 Last summer I was enjoying some peanut butter with my two year old son. It was the first time he really ate a decent amount and I was excited because he was such a picky eater and this would be a new food for him to enjoy. I had tested out giving him peanut butter three other times and he seemed to tolerate it fine. Each time he only had about a teaspoon and I closely watched him afterwards to see if there was a reaction.

However, this time, after about 20 minutes, I started to notice his lips swell and he got a blotchy rash on his cheeks and chin.

I immediately gave him Benadryl and then I Googled “peanut butter allergy.” All of the websites I came across listed lip swelling as one of the potentially life-threatening allergic reactions and a symptom of anaphylactic shock. I immediately called the doctor’s hotline since it was the weekend. I spoke to the doctor on call and he said as long as I gave him Benadryl and his breathing was fine that he should be okay. I still wonder if that was the right advice but we were fortunate that the Benadryl immediately alleviated his symptoms.

The next day I called to make an appointment to get him tested at the allergist. I was nervous but optimistic that maybe it was something else and not the peanut butter. After all, I gave it to him several times before and he seemed fine. Perhaps this was a fluke reaction to something else he may have picked up off the floor. I thought about the possibility of being “one of those peanut moms,” and held onto the optimism that my son would not have a peanut allergy. Looking back, I think of my ignorance as well as denial and wonder why I was so closed minded on the topic.

Sure enough, after my brave little guy got pricked in the back multiple times – I heard the dreaded diagnosis: “Your son is allergic to peanuts and tested at the highest end of the range, level 4.” My heart sank and I started to ask all of the usual questions:  “What do I now? How does an Epi-pen work? Is he allergic to anything else and most importantly, will he ever grow out of it?” 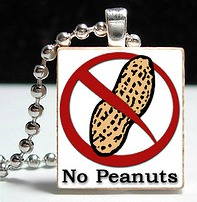 The first answer was an overview on how to avoid peanuts by eliminating the food, reading labels, asking questions at restaurants and the importance of making sure that everyone who cares for your child knows about their allergy and what measures to take if they ingest peanuts or have a reaction. Then the doctor showed me how to use an Epi-Pen and explained that the box would come with a tester that I could practice with on an orange. As for other allergies, my son did not test positive for any other food groups or animals – just a mild allergy to dust and mold. Lastly, the doctor said that there was a 20% chance he could grow out of it, but not that likely.

I left the office with a feeling of dread and to be honest, at that moment I felt pretty depressed. When I told my husband and my family, their first response was “Oh, he’ll grow out of it.” As if the allergy was not real or that it would disappear as time went on. I know they did not mean it that way, they were trying to alleviate my concern, but it almost felt like someone was telling me his new diagnosis was not real. I started to think of what a severe allergy meant and how it would affect treats, birthday parties, holidays, eating out and the fact that my child would be one of those kids in the lunchroom at the “peanut free table.”

I decided to post a comment on Facebook asking for tips and ideas from anyone else who had a child with a peanut allergy. I couldn’t believe how many of my friend’s children had it and I never knew. They gave me so many awesome tips, links to allergy websites, as well as lists of which cookies and snacks were safe. I immediately felt so much better and knew that if they could deal with it with such confidence, I would be able to as well. Time and time again, the best support in life comes from other mothers!

Since the diagnosis, I have dealt with the usual frustrations that “allergy parents” have. Constantly reminding family members to check labels before feeding your child when in their care, following your child around at birthday parties making sure they don’t eat anything off of a table, bringing your own snacks or treats to events and restaurants, having panic attacks when you go for a quick ride or a day out and realize the Epi-pen is in your other bag at home and lastly – explaining over and over again that peanut allergies are real and my child can die if they have peanuts!

At times, you feel like the crazy person, the exaggerator, the neurotic one. The bottom line is that my child is my number one priority and so is their life. I really don’t care what anyone thinks!

As mothers, we all have something to worry about. I have met many other moms with children who have allergies, and they have it much worse than my son. There are many children who can’t eat wheat, milk and eggs – common ingredients in many of the basic foods out there. I find that much harder to manage than a simple peanut. I actually consider us very lucky that he is only allergic to one thing. Dealing with allergies can be stressful but is also manageable, at least for right now. I am nervous for the future and most days I try not to let it preoccupy our lives. I wonder if my one year old daughter will have it too. I cross my fingers and hang on to the hope that he will fall into the 20% of children that outgrow it. But at the end of the day, my child is happy and healthy and that is most important in life. What more can we ask for?

Do any of your children have allergies? What are the biggest challenges you have encountered with managing an allergy?

This is an original post to World Moms Blog by Wall Street Mama of New Jersey, USA.