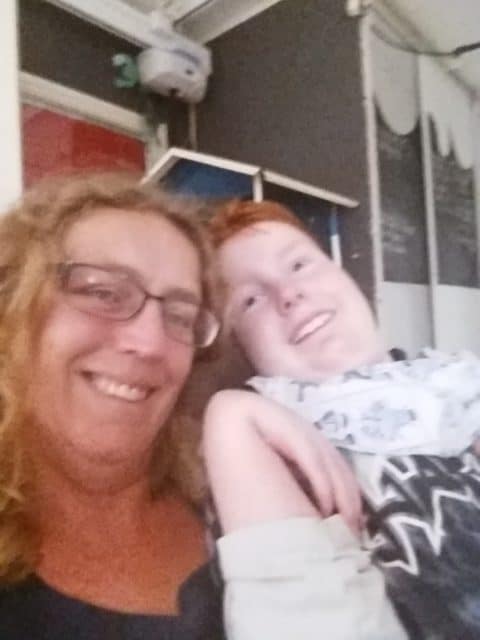 My name is Coretta Vermeulen. I am a 1970’s child, the daughter of my 81 year old mom and my dad who would have turned 88 today. I’m the mother of three kids by birth, bonus mom of two, and spare grandmom of one.

I was born and raised in the Netherlands. Now, this is not a big country, but I took a giant leap of faith moving from a small town in the North to the big city of Amsterdam. Oh, I can tell you stories about that!!! And I will, in time.

My native tongue is Dutch, but I also read, write and speak English and German. In Dutch high schools, learning foreign languages is mandatory. Whoo, lucky me!

I became a mom at age 27. I was drawn to the man who fathered my oldest son (oh, I can tell you stories about that!!!) because of his interaction with his then 4-year-old daughter. I actually never wanted kids before, not because I didn’t love kids (I did), but because of the whole lifetime relationship with someone who claimed to be the dad. I really hadn’t had the best example, daddy-wise. It freaked me out. But this man was so sweet with his daughter, giving her attention, revolving his whole life around her. So I thought: what the heck, let’s just go for it. As days became weeks (yeah, that fast!) I noticed the psychiatric imbalances in him: it ruined a perfectly good man with a good heart. But by then I was already pregnant, and I decided to just make the best out of everything. Who knows how far I could come with him? After all, my love for him would cure him, right? And then there was his daughter, who was depending on me too. So, we gave it a shot.

I’ve been working on and off since I became a mother. I had my teaching diploma, but there was little work in schools for young teachers. Fortunately, my then husband had been putting up a remedial program for dyslexic kids, and they could use me in it. So we worked both half a week, bringing our son to his grandparents once a week. It was the perfect balance. Until it all blew up in my face.

After my divorce and move to Amsterdam, I had a 40 hour work week at a school with lots of different ethnicities, young kids aged 4 to 6/7 years old. I took my son to school with me. After a while, I could ask some parents to babysit while I was having conferences, meetings, and the like. I remember this time as one of my strongest periods. I was so proud that I did this, all alone, recovering from an abusive marriage, recovering from very strong and powerful family ties, having a 40 hour job that I loved. I lived the insecure life of illegal sublet housing before I got my own place, redone and redecorated just by me, the handy-gal. I was a single mom in a strange city, and even considered having a second child by myself.

A series of incidents made me realize that although I AM a teacher, I cannot be bound by rules and regulations that I don’t support, and that do not support teachers or students. As my life took a turn to the worse, I gave up on teaching and haven’t been working since. I met my current husband, married and moved again. We had two children, and I stayed at home.

That’s going to end though, but I will tell that some other time, too.

I have always loved writing, but I am a little shy. At 46, I recognize that every artist is unsure about his or her own talent, even when someone performs daily over a period of years. So the writing thing (singing thing, creating thing, painting thing) never really left the building, except sometimes on Facebook or Google-Blogger. I do get nice responses, but I tend to think people are “just saying that to not make me feel too bad”. I recently auditioned to be a singer in a band nearby, but I’ve not heard from them. I guess the singing thing will stay at home with me, but I hope I will do a better job at the writing thing.

We have a very different family, which you all will definitely come to know. Writing about the things we experience daily helps me in a lot of ways, and I think maybe other people might benefit from it, if I can make someone smile or see things in another perspective, like it does to me.

I don’t consider myself special or unique. I am just a girl who gave birth to some live dolls. I act out like a little girl all the time. But that’s just a phase I’m in right now.

I think that my YOUNIQUENESS lies in being authentic. Although I try to hide my bad moods and not project my problems/emotions onto my family members, I really can’t. So yeah, sometimes I shout and yell and curse, but mostly that is pure and utter frustration from my side, after having said something for the @#$%&*! time, or tripping over shoes in front of the doorway, or picking up laundry from all over the house. I am consequently inconsequential, and that is a good thing, because I am flexible like that. I am NOT a hover-mom: my 9 year old daughter cycles to school on her own, facing traffic and traffic rules and teenagers blocking her way and what not. I haven’t seen the inside of her school for months now. I let her walk our big dog, because I trust them both. I let her go shopping for me and smile and praise her when she’s done her best finding the right groceries but ending up with completely different stuff than I asked for.

Although there is a lot going on in the world, and it seems like the worst time to grow up, I don’t consider that being a parent is very difficult at all. From the births of my children, I have watched them grow just on their own. I could look at them for hours! How they discovered their hands, their feet, getting a reaction from repeatedly taking off their socks, being completely startled when first rolling over or standing up, and then the smile of triumph. All you have to do is put some food, love and trust in them, and the rest comes naturally. I believe in raising our kids authentically, with common sense, trusting their innate qualities and abilities, following some simple guidelines, parenting out of love and not fear, nurturing body, mind and heart. We need to set our own boundaries in which children can grow and discover safely. Above all, I want my children to be genuine, true to themselves, believing in themselves, being able to trust themselves as much as others.

I’ve been reading World Moms Blog for quite some time now, as I am Facebook friends with other bloggers. I love reading about the interaction with our sprouts, the dos and dont’s, the similarities and the differences across the world, in different cultures. As a child, I always thought that my mother knew exactly what she was doing and why. After being a mom for almost 19 years now, I still don’t have a clue, and sometimes I’m even scared of being caught at it, so people can see: See, she acted like she knows everything about it, but look at her! I recently learned there’s a term for that, the  “imposter syndrome”

But I’ve come to terms with just doing what I do and hope for the best. Up to now, I think we have managed just fine.

I'm Coretta, a former teacher. I'm married, and the mother of an 18 year old son, a 9 year old daughter and a 10 year old son, and bonus mom and grandmomship. Our 10 year old son Fygo has brain damage due to near drowning and has no use over his body, except for his eyes and ears. He lives with us at home and visits a special school. We try to live "a normal live" as much as possible.