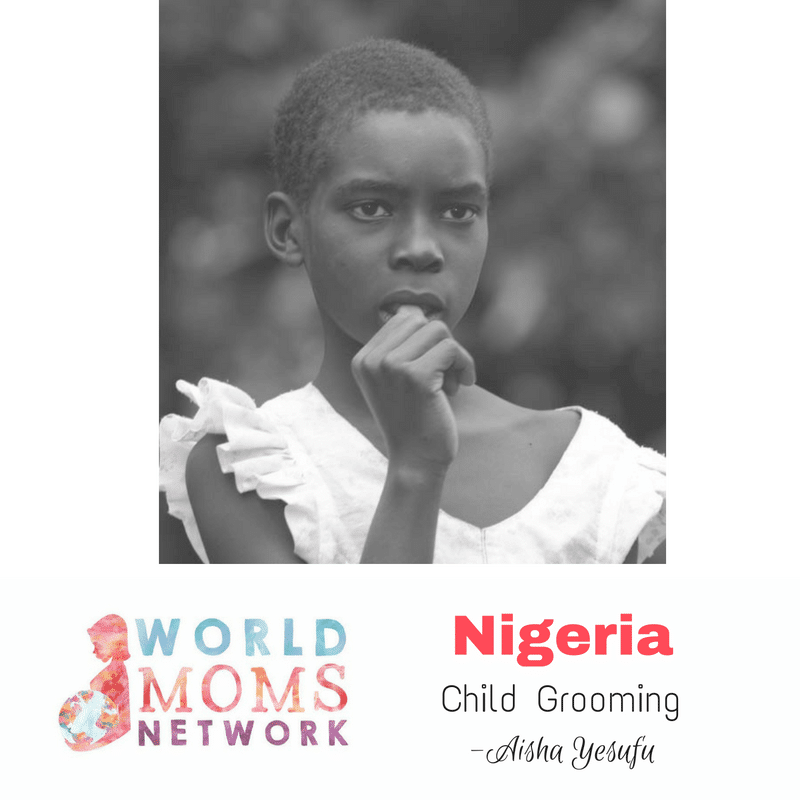 Child grooming is a term that describes the befriending of and establishing an emotional connection with a child, and sometimes the family, to lower the child’s inhibitions for child sexual abuse. Many young girls have been married off to older men or have been lured into predatory relationships through this tactic. Some of these girls are said to give their consent, but what does a child know? It’s our duty as parents and society to protect our children. Child grooming is unacceptable and people should be prosecuted for it. In my youth, I experienced child grooming by a man old enough to be my father. I probably would have been married at the age of 14 with loads of children and a truncated life had he not been stopped.

The child grooming started when I was about 14. There was a man about my father’s age who lived in our neighborhood. As is our cultural tradition, I treated him like a father. I would greet him whenever I see him and I never thought anything about his smiling to talk to me and ask me how I was faring. I was just 14 and reading novels was more on my mind than marriage.

Since my school was far from our home and I didn’t have enough money for transport, I had to leave home early to get to school on time. At some point, the man started to meet me on my way to school. I would greet him at the bus stop as we were all brought up to do, and he would pay my bus fare. After the first few times I grew wary. I hate anything free in my life – I still do. Sometimes I would sit in front seat and pay before he got the chance to pay for me. This went on for months and in the the process he started chatting me up and offering me money, which I would always refuse.

I became desperate to avoid him, but he would always be hanging around waiting for me. Of course, I couldn’t insult him or walk away from him, because respect for one’s elders is a critical part of our culture. This old man was a cloth merchant, and was incredibly wealthy by our standards. His children were always well fed and clothed. He would offer me money, more money than I had ever seen in my young life, money that was supposed to tempt a hungry child who had nothing. I would always refuese. One day, he forced the money into my hand and I let it fall to the ground.

I became desperate to escape that old man, but I could not. I switched to a bus stop further from my house, yet he found out and started following me there. I was hunted for over a year by this man and I didn’t tell anyone. Who was there to tell? I didn’t even think it was in my place to tell anyone. We didn’t have that closeness we have with our children today and I pray our children have more with their own children. After a while he started talking about marriage and how he would make my life enjoyable and also he would take me on trips abroad.

The old man even started giving food and money to my parents. Imagine what it was like for a starving family to get such assistance. He was adored in our house. This was classic groomer behaviour: buy the child, then try to buy the parents. Sometimes I try to imagine what would have become of me if I had not been so strong-willed at age 14. Would I have decided I wanted to marry him?

The harassment lasted for a long time, but eventually he left me alone when he realised I was not interested in his thoughts of marriage. When I was 15, he married an even younger girl of maybe 13 years. She was taken out of school to marry him. They had a daughter together, and years later they divorced. All this happened before I even got married at 24.

The old man has since passed away and is no longer a threat to me or any other owman. I cry when I think about this story, knowing how an old man had tried to trap me, and how he eventually trapped another young girl. I know what it was like to live with this harassment and fear. I know child groomers when I see them. When I hear about dirty old men saying a 14 year old decided to marry them, I see a child groomer who should be in jail for putting such thoughts in her head in the first place. Grooming a child with money, promises, love and hope should be made illegal. Many lives have been destroyed by it.

God protect our teenage daughters. They are an endangered species.

This is an original post for World Moms Network by Aisha Yesufu of Nigeria.