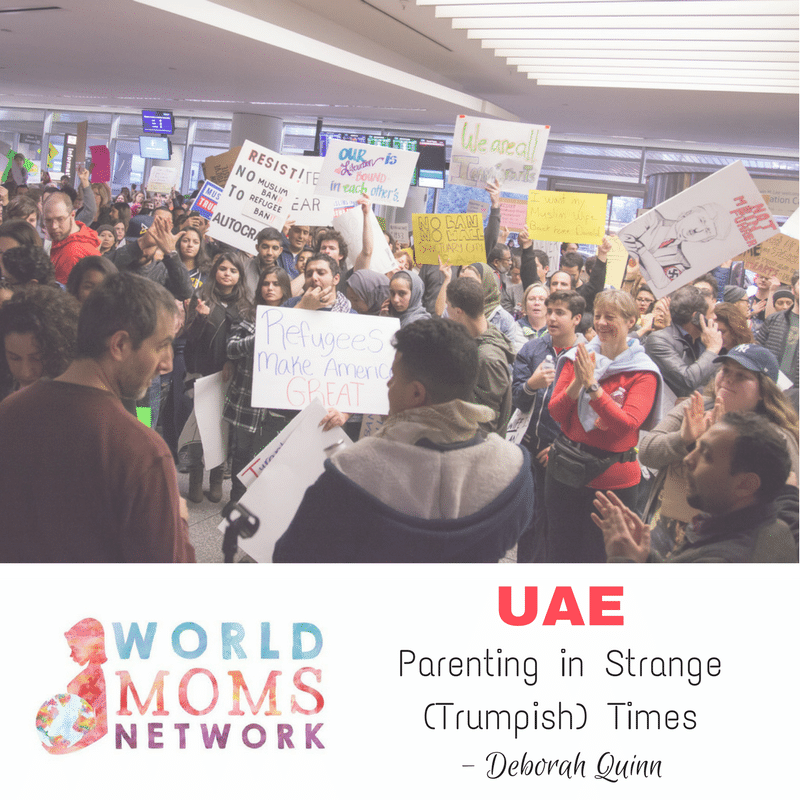 We are living in strange times. Here’s how strange they are: the other day I found myself nodding in agreement with something that Dick Cheney said. He is one of the few Republicans who spoke out immediately against Trump’s executive order banning Muslims entering the United States. (Of course in the same interview, he talked about how there was “nobody in America” when his Puritan ancestors arrived. I guess some things never change.) I’ve also started following Pope Francis on Instagram. The Pope gives good Insta, I have to say, but the thing is, I’m not Catholic. I’m not even a lapsed Catholic. I’m not even religious. The closest I came to a religious moment is when I was about seven and was a horse in the St. Augustine “Noah’s Ark” pageant. I pranced down the aisle with the other “animals” and then we all huddled around the altar while Father Pemble—the hippy minister with a fabulous baritone and a red beard—sang songs about the flood. A religious high-point, for sure.

I don’t agree with the Pope on some key issues—he’s not going to be espousing any pro-choice rhetoric anytime soon—but his messages speak to the importance of caring for all of humanity, not just those who look like you.

Here’s an even stranger thing: for the first time in my adult life, I wished this weekend that I had become a lawyer. Because if I’d been a lawyer, and if I were in the United States, I could have gone to an airport and offered my services to detainee families as they (as we all) struggle with the implications of Trump’s destructive (and illegal) actions. I even suggested to my sixteen-year old son that he might think about becoming a lawyer — an idea that wouldn’t ever have occurred to me a month ago. Watching from afar as US airports flooded with people offering support of all kinds to detainees and their families—legal advice, places to stay, food, whatever they could find—I felt a tiny glimmer of hope. The Women’s Marches were amazing, a tour-de-force of activism, energy, and global feminism, but somehow the airport protests seem like an even bigger deal, because they were spontaneous, contagious, and effective (can we get a shoutout for the ACLU)? As the wonderful Dahlia Lithwick wrote in Slate, “Donald Trump has no idea how terrifying a blue book and a Lexis password can be. He’s about to find out.”

The protests have also helped me to show my kids that all is not lost (for a little while longer at least): the country still has the rule of law, which the President has to obey. I’ve been pointing to the photos of lawyers sitting on airport floors, laptops open, as signs that individuals can make a difference and that Trump’s message of fear has not taken hold everywhere.

That’s the thing, isn’t it? How do we explain Trump’s actions to our children when what he’s doing violates such fundamental principles of civility? And how do we keep our children, particularly older children, optimistic about the future when around the world things seem so bleak? My sixteen-year old son is full of the existential despair that only a teen-ager can feel. He says things like, “yeah, I’m doing my homework, not that it matters because…Trump” – which might become the 2017 version of “the dog ate my homework.” Like most teenagers, my son is a pretty rigid thinker: things are one way or another, the best or the worst; he has lots of opinions and they are, of course, always correct. The night after Trump’s victory (a landslide, as Trump keeps telling us), The Teen said, “but mom, I thought the good guys were supposed to win.” He looked so sad and confused, and I could almost hear the screeching gears in his mind trying to recalibrate his world view.

The Teen has only known Presidential elections where Obama won, and although he knows theoretically that “good guys” don’t always win, this election is his first real-life whammy of watching the good guys lose. It happens to all of us eventually, and sadly, we may even come to expect it. But right now, the Teen is sure that we’re all doomed. I’ve had my fair share of similar thoughts since the inauguration (did you see those “huge” crowds on the Mall for the swearing-in? Yeah, me neither), but I don’t want my kids to feel as pessimistic as I do. They’re young, right? If they lose hope, then that’s the end of the game.

Dear young people, make a ruckus! A ruckus that brings a free heart, solidarity, hope, a ruckus that comes from knowing Jesus and knowing that God is our strength.

Surprisingly—or perhaps not surprisingly, given how odd things are these days—I found some advice on the Pope’s Instagram. The day the Muslim ban went into effect, the PopeFeed featured a picture with the caption: “Dear young people, make a ruckus! A ruckus that brings a free heart, solidarity, hope…” You know what? I’m thinking ruckus sounds just about right. Perhaps that’s the final thing: I’m actually telling my kids to make a ruckus. Ask questions, read the news, read history, pay attention. And vote. The sixteen-year old will vote for a President in 2020. I wonder who she’ll be?

This is an original post to World Moms Blog by Deborah Quinn, Mannahattamamma of the UAE.