MADAGASCAR: Melancholy and Infinite Sadness – A tribute to my Mom 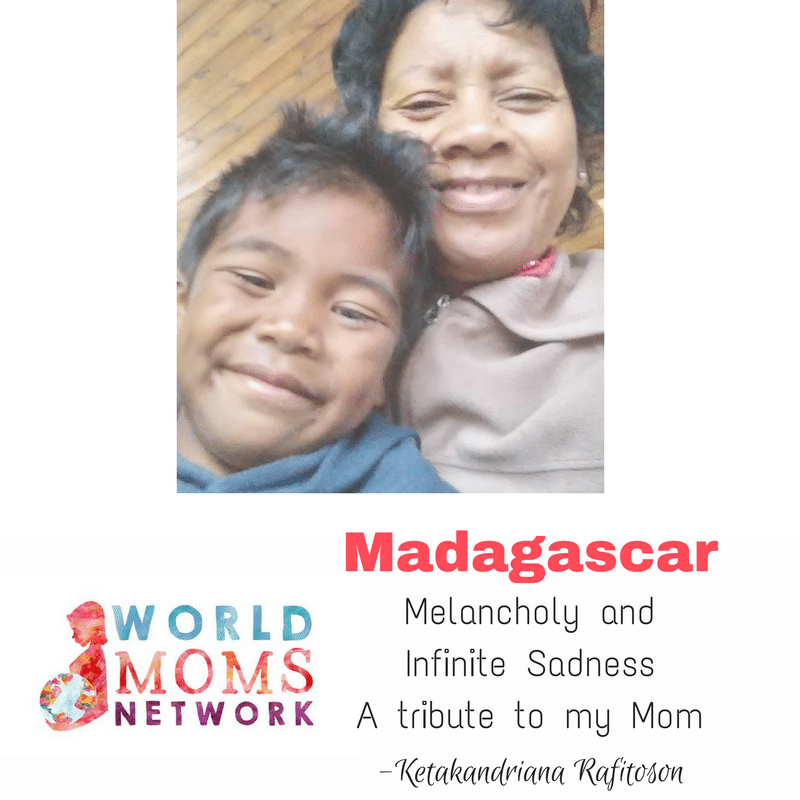 Ever since I was a little girl – even just a few months ago – I always thought that my mom was immortal. But she died on December 11, and left us devastated. Her name was Lalao, and she was just 61. I am a mom, and moms are supposed to be strong, right? But how can I pretend to be strong when I lost my confidante, my best friend, and the one who made me, in such tragic circumstances?

After freeing herself from domestic violence, Mom took care of my brother and me, all by herself. She faced hardship, poverty, injuries, and sacrificed her dreams for giving us a good education and a decent life. And through laughter and tears, she stood tall. I remember she had to work during nighttime to make ends meet, but still found some hours to pamper us before or after school hours. She was very severe with us, and we sometimes felt oppressed because she always asked us to do our best, especially regarding our studies. She, along with my grandma, used to sew suitable clothes for us, so that we don’t feel miserable. And we were happy, for a certain time.

A few months after my father died, Mom reconnected with a man she dated in high school. That guy hated us and wanted to have his own child with my mom. In 1995, she had an ectopic pregnancy which required surgery and left her unable to bear children. Her man started to cheat on her starting from the day he knew she won’t be able to have children anymore. Violence was back in our life, but it was different from our father’s style. This violence was more psychological, and at some point our family exploded because he asked Mom to choose between him and us. Mom wanted to stick with him until the day she found out that he had a baby with another woman. That was in 2001.Mom went into a deep depression. I know these were really hard times for her, and I feel guilty because I tried to escape from all this suffering in the best ways I could: studies, activism and – soon, marriage. I was just 22 while I left my mom and brother for my new life with my husband. I didn’t want to be a burden for my mom anymore. I found a job and paid for my own studies.

Eventually, my mom found a new job, and her life tremendously improved. She was happy again but was anxious about my brother who struggled with his studies. I will always remember her smile and tears of joy while my son Tony was born. I think she saw him as a kind of achievement. For the past 3 years, she was totally involved in community projects, helping the poorest. She was full of energy. Today, when my youngest son, Hugo, asks why Mamie “left”, I still really can’t find suitable words to explain the situation.

This is the most awful situation I’ve ever experienced in my life. At 2pm on December 5, Mom called me, saying that she had severe abdominal pain. We had met the previous day and she was perfectly normal. My husband jumped in his car to take her to the hospital. This was not the first time – my mom was often sick with serious stomach pains, but we didn’t knew what was causing it. Her stomach sometimes inflated like a balloon, and it was so painful that she couldn’t even wear a shirt over her abdomen. Just as quickly, her symptoms would disappear.

So, the morning my husband rushed her to the hospital, we thought it would be the same. She was convinced that she would be back home a few hours later. I had to work, but I tried to find time to stay with her at the clinic. At first, the doctors said she had salmonella, and then typhoid, but the treatment they gave didn’t make her feel better.

I was worried, but still felt confident. I was also busy because my kids had their mid-term examinations, and the premiere of my movie on civil resistance was that same week. I briefly saw Mom on the day of the premier, and she said, “Good luck tonight!” She watched the movie on my laptop and she liked it. I really missed her during the premiere. The day after, I was running a training while she texted me. The doctors told her she urgently needed surgery. Finally, they had diagnosed her, not with typhoid, but a bowel obstruction.

She was transferred to a different hospital, more equipped for this kind of surgery. We slept only for a few hours that night. On my birthday, she went for surgery early in the morning. She finally came out of surgery at 2 p.m. The doctors explained that there had been complications during the surgery. It appears that someone had accidentally left a pad or a towel in her womb during her surgery after the ectopic pregnancy in 1995. The foreign object had been lodged in her bowels, which was the source of the obstruction. They had to cut 40cm of her intestines and create a bypass. Ther surgery was long and complicated, but she was alive. I thanked God, thinking that her misery was finally over.

We were only allowed to visit her twice a day: at noon and at 6pm, because she was still in the emergency unit. I talked to her, and she was fully conscious. She wanted some water but it was forbidden. I wrapped her chaplet around her skinny arm and she asked for prayers. Friday night went well. I didn’t want any party for my birthday, given the situation, and my kids didn’t really understand that (they were looking forward that party for a long time). On Saturday, the head of the emergency unit asked called me to her office. I was scared. She said the situation was critical because my mom had had a stroke that morning. They managed to save her, but they were concerned about future stroke. I begged her to do her best.

I saw Mom again on Saturday evening. She looked very tired and she was thirsty. She said she couldn’t feel her legs anymore and the doctors explained that it was because of her disc herniation (a problem she had after a car accident in 2010, another sad story). I don’t exactly remember what I said to her that evening, when I left. I just remember I urged her to hold on. While I heard a car arriving in our yard around 2 a.m., and saw my husband standing on the door, I didn’t want to think to the unthinkable. But the unthinkable had occurred.

My mother died firstly as a consequence of a bad operation she had 21 years ago. She lived with a pad in her abdomen, and that was probably the root cause of all her problems. Then, she died because of a false diagnosis. If the bowels obstruction was detected the very first day – through a basic exam – things would have gone differently. She died of a “massive pulmonary embolism” on Sunday, at 01:25 a.m., because she was exhausted by the pain she felt from the previous Monday till that very minute. I think she gave up. Too much pain and too much suffering in a single life! Too much violence, too many tears, too much sadness! She said, “Enough is enough,” and she walked away. I had to call my brother, who lives in Morocco, to tell him the bad news. That broke my heart once again. He arrived a few days after, a torn soul.

So, what are we up to, now? We moved to Mom’s house with our kids because we wanted to keep her memory alive. It’s a rental but we hope that someday we’ll be able to buy it. My brother is back to Morocco, and he tries to grieve in a constructive way. As an activist, I feel I won’t find peace if I don’t do anything about this false diagnosis, and about healthcare in general, in Madagascar. Do you know that here, you can still die from fever, or from cholera, or from whatever disease, because average people can’t afford drugs? As 90 percent of people live with less than $1.25 a day, where can they find money for healthcare? And the government does nothing! Rich people go to Mauritius or South Africa to get treatment. Average people like us go to public hospitals or private clinics where you can die because there’s no oxygen, or because of a power shortage. Poor people just die in the streets, from starvation, or from treatable conditions. The doctors say, “Don’t blame us, blame the State! We are poor victims too!” Perhaps. What can I do in order to change this system? Any idea is more than welcome!

I don’t want Mom’s live to be wasted like dust in the wind. I need to do her justice, but without going through a trial because corruption ruins everything here. Please, moms, help me to find my soul back again. Tell me what I can do for my mom, my immortal hero.

This is an original post for World Moms Blog by Ketakandriana Rafitoson, our contributor from Madagascar.