SOUTH AFRICA: Why do we do the things we do? 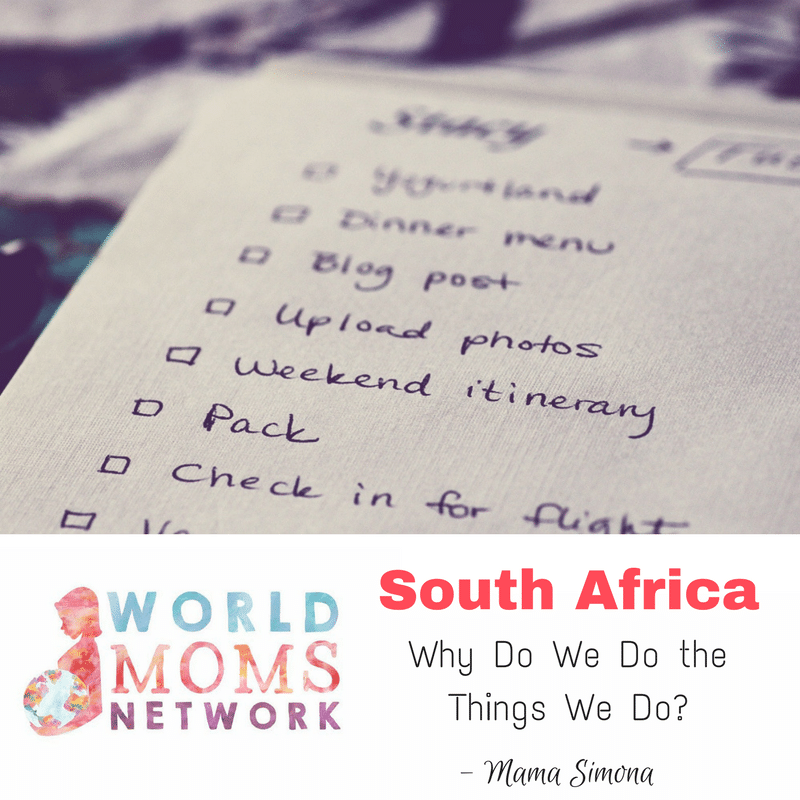 My 20 year old daughter and I have been having some very interesting conversations lately.  The latest is what prompted me to share this with you.

I believe that all of us have things on our “To Do” Lists that somehow never get done.  We feel badly about not getting around to them, but we console ourselves with the “I don’t have time to do it” excuse.  We might even believe that there aren’t enough hours in the day to get everything done, but the truth is that we make time to do what really matters to us.
It’s actually a relief to admit to yourself the real reason for not doing something. It might be fear of failure, or simply the fact that we haven’t yet reached the level where the discomfort of not doing it is greater than the relief / happiness / sense of accomplishment etc. that getting it done would give us. Of course this is almost always something that happens subconsciously.  It’s only when you take a step back and objectively look at how you have spent your time until now, that you realise what’s truly important to you, and / or what’s holding you back.
Now I could argue that what I do at the office Monday to Friday is not something that I necessarily want to do, or ever aspired to be doing, however bringing the paycheck home is a priority (because we couldn’t afford to pay for my chronic medication, send our daughter to College, live in the house and neighbourhood we do, etc.) if it wasn’t for the money I contribute to our household every month.  Moms of babies, still in the blur of sleepless nights, feedings and nappy changes could argue that they would rather be doing something else, but it’s not really true, because the well-being of our children trumps everything else (at least for most moms)!
So why do we do the things we do?  It’s all about the “payoff.”
As much as we don’t like admitting it, humans are self-centered.  This is a simple fact. It doesn’t mean that we’re necessarily selfish or egotistical, merely that we (again, usually subconsciously) don’t do anything unless there’s some kind of benefit for us in doing it. For example, I have chosen a charity that does amazing work with special needs children in my neighborhood, and I have volunteered to be their Fundraising Co-ordinator. The “payoff” is simply “feeling good” about doing something to help further a cause close to my heart. I have started a “secret” Facebook page called Living with an Invisible Illness (for everyone who is living with any kind of chronic condition). The payoff? It’s an online support group that helps me as much as it helps the other members.
I’m pretty sure that, if you really think about it, you will find your “payoff” for even the most altruistic things that you do.
Is there anything that you feel you “should” do, but never get around to? Can you identify the real reason for not doing it?
This is an original post for World Moms Blog by Mama Simona from Cape Town, South Africa.