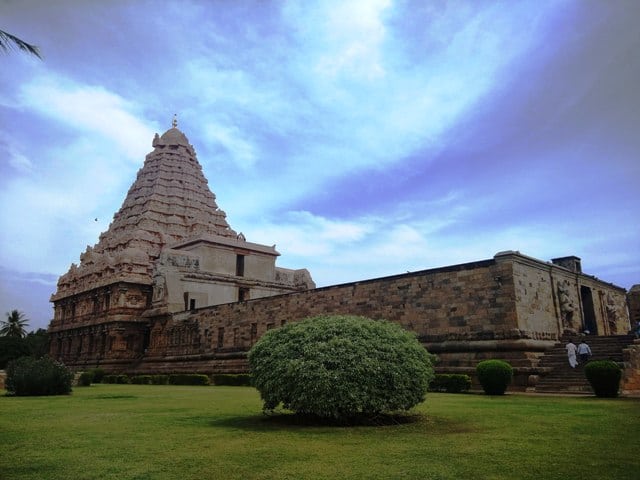 There was an air of pious anticipation, that one could almost hear the elephants trumpeting while carrying huge granite stones to build the temple, one could almost hear the hum of the 400 odd dancing damsels’ and their anklets tinkling, while dancing for Lord Shiva (as the lore tells), and one could almost envision the talented artisans carving out the beautifully sculpted figures. Gangai Konda Chola Puram is one of the UNESCO World Heritage sites, and called as the “Great Living Chola Temples”. It is called “living” because it is still very much an alive place of worship. Perhaps it is also called “great” because of the rich heritage of the Chola Dynasty still palpable in the atmosphere. But wait, I was in for a surprise as I was just yet entering the temple’s premises.

The temple was built in the 11th century AD in a record time of nine years by Rajendra Chola-1, son of Raja Raja Chola. He was a mighty warrior, who won over major kingdoms in India up to the Gangetic plains in the North, and South East Asian countries like Sri Lanka, Cambodia, Vietnam, Malaysia and so on. He had come back to Tamil Nadu State in India, and built a city as his ruling capital, and named it Gangai-Konda-Chola-Puram, meaning the capital of the King who won over the rulers of the Ganges. 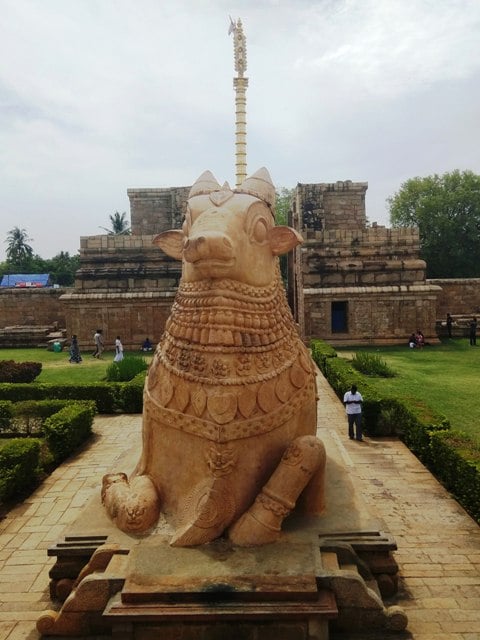 The first thing anyone would notice in this compound is the huge 11 feet tall kneeling Nandi (bull) statue, Lord Shiva’s stoic vehicle. This is so similar to the Sphinx in front of the pyramid in Egypt. It is resplendent and majestic in itself, and one can gaze for more than a few minutes and walk all around it admiringly. The strength, virility, and controlled power in Nandi was tangible in the statue. This is one of the 12 monoliths of Nandis in India, carved out from a single granite stone. 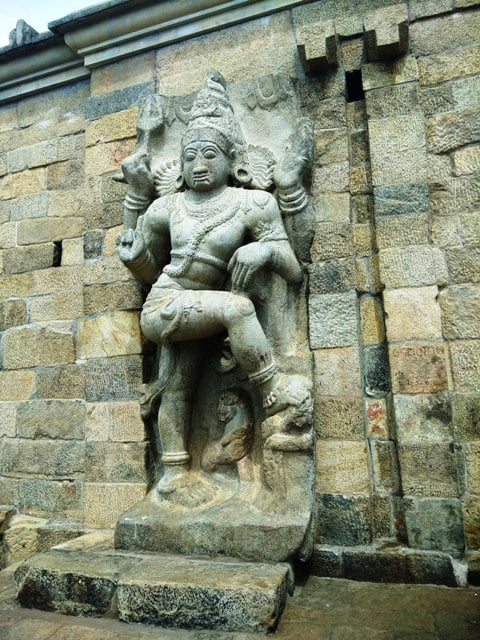 As I walked beyond the Nandi, there was a flight of stone steps leading up to the sanctum where Lord Shiva’s idol rested. The entrance was flanked by the dancing Nataraja sculptures, which was a trademark of the Chola architecture. The Chola dynasty was known for encouraging art, culture, dancing, creativity in the form of sculpting, painting, poetry, literature, scholarly debate as a way of expression and so on.

The dancing Nataraja sculpture which is world famous, with a presence even at CERN, Switzerland, originated during the Chola period.

Walking past this ancient relic, I wondered if the foot of the statue held any geomagnetic effects as the lore claimed. 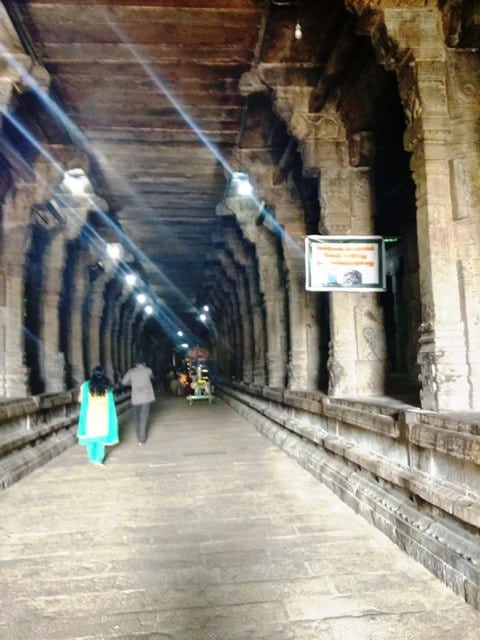 The weather was very pleasant, not too sunny, just the right dose of sun for a summery South Indian morning. The entry into the doors of the temple gave me a tiny shiver. There was a man sitting just near the entrance giving out oil lamps for those who wanted it. There were some who walked in without taking his lamps. My attention drifted, searching for the idol. All I could see was a very long corridor, with the hope that there was the idol at the end of it. It was slightly darker inside. I wondered, why the King, Rajendra Chola, who built the temple, had to make the corridor so long? Slowly my son and I started walking onward. There was an opening in the left and right side somewhere ahead of us. But we could already feel a cool breeze from a draft somewhere nearby. We continued to walk. The gentle breeze was soothing. It was perhaps whispering secrets about the beauty of the art and richness of the culture of the Chola Dynasty. I looked around to observe the walls, trying to grasp all that I could from this one long walk. I also realized my mind was numbing me to stop my wandering focus.

We had made this trip to the temple, because we happened to be in the vicinity, and did not want to miss out checking a UNESCO World Heritage site. That was all. But here I was trying to squint my eyes trying to figure out what the idol of Lord Shiva looked like. Slowly I felt my eyes drifting close. I opened them, immediately alerted. I was walking after all. I could not close my eyes.

This was not like the regular temples. There was a special uniqueness here. We both could sense that.I wondered if Lord Shiva knew all the devotees entering this temple.

During all this train of thoughts, I felt the gentle chide of the breeze, nudging me to focus on the life essence of the Universe.

The idol was consecrated, I realized. The breeze was telling me that.

The holy process of PranaPrathishta or consecrating a stone idol, which is an image of god, is done to infuse the divinity into the idol, the temple and the neighborhood too if the energies can be strong enough. So how is it done? In recent history, rituals, hymns, and mantras are used for the process thereby signaling the completion of consecration. However, in ancient times, the sages Agastya and Patanjali were known to perform PranaPrathishta by infusing life force or life energy into the idol. It was a very active and transformative process. They wanted to make sure that all of living habitation across the world should have an environment of holy life energy. Thus this also accounts for numerous temples across India.

Is there a modern day scientific explanation validating the process of PranaPrathishta, you may ask.

Fellow to the American Academy for the Advancement of Science, Professor Emeritus William A. Tiller, of Stanford University’s Department of Materials Science, spent more than three decades to validate this.

William A. Tiller says, “For the past 35 to 40 years, in parallel with my traditional science research and teaching at Stanford University, I have been seriously investigating the effects of human intention on both the properties of materials (inorganic and organic; non-living and living) and on what we call physical reality. From this research, I and my colleagues have discovered that it is possible to make a significant change in the properties of a material substance by consciously holding a clear intention to do so.”

Our walk in the corridor, from the door leading to Lord Shiva’s abode, was almost ending. We were standing in front of the idol now. I looked at my son. He was silent for a change. His mind was not jumping into all sorts of science and math and mythology talk, which was a relief for me. I was enjoying these few moments of silence too. He had already commented about the similarities and differences between the trident of Shiva and Poseidon, as we were entering the temple.

After what seemed like a long lapse in time, in front of the idol, we looked at each other and then silently walked out. 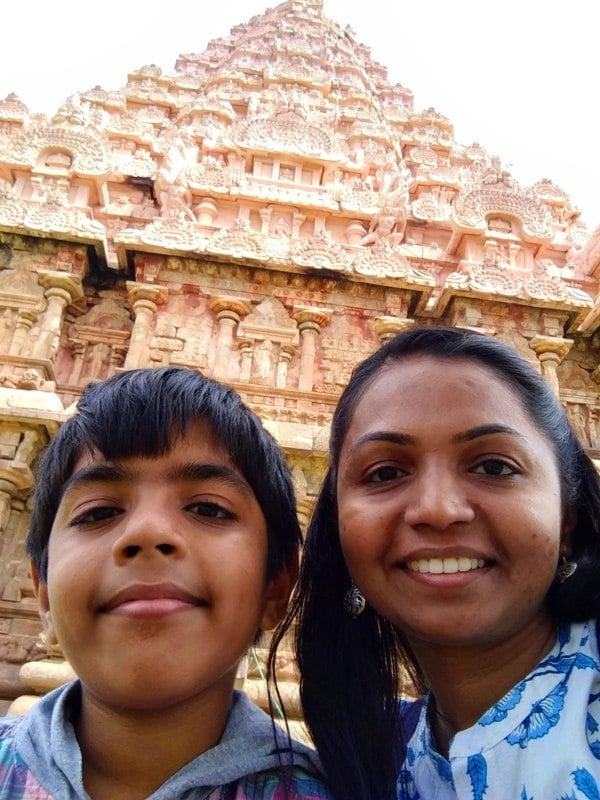 #WorldMom Purnima from India with her son

The lawn around the temple grounds was well maintained, and we sat down and relaxed for a bit. There were a lot of sculptures all around, and some smaller temples for minor deities. We were in no hurry to check them all out.

“What just happened in there?” asked my son.

“It is a holy place. You felt the effects.” I replied.

“But what really is that, which we felt?” he asked again.

“It was peaceful,” he said.

“And something more, which cannot be explained,” he continued.

I felt obliged to explain to him the holy process of pranaprathishta of an idol by pure intent and will, by the holy seers of the ancient.

“If they could transform a mere stone to god, they could do it to living things too, who are alive and receptive, and holy in thought and action,” he concluded.

“Yes, perhaps they could,” I smiled. 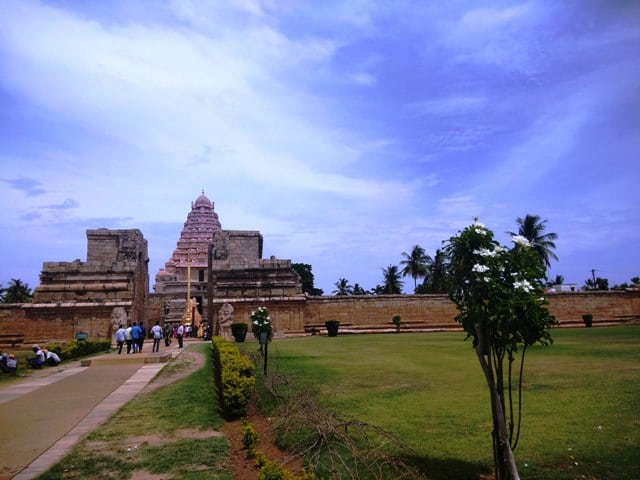 As our visit was coming to an end, I couldn’t help thinking that in today’s times, we are gifted with Pranahuti, or Yogic transmission in the Heartfulness Meditation system. The Heartfulness trainers are trained to impart this energy to the seeker.

In the words of the modern-day saint, Ram Chandra, “Transmission is the utilization of Divine Force for the transformation of man.” By such a transformation man is divinized, he says.

Kamlesh Patel, the global guide of Heartfulness says, “The best way to understand transmission remains to experience it practically… For many people, the experience of receiving transmission is so convincing that no further proof or understanding is necessary. I invite you to experiment and experience it for yourself.”

Extending the possibilities of the consecration of an idol through pranaprathishta to the transformation of man to make him divinized through pranahuti, is a giant leap of evolution in the history of mankind.

The beautiful thing about our planet’s rich past is that it has led us to the evolution of the present.

Tell me a little bit of spiritual revelations you have had, from your culture.