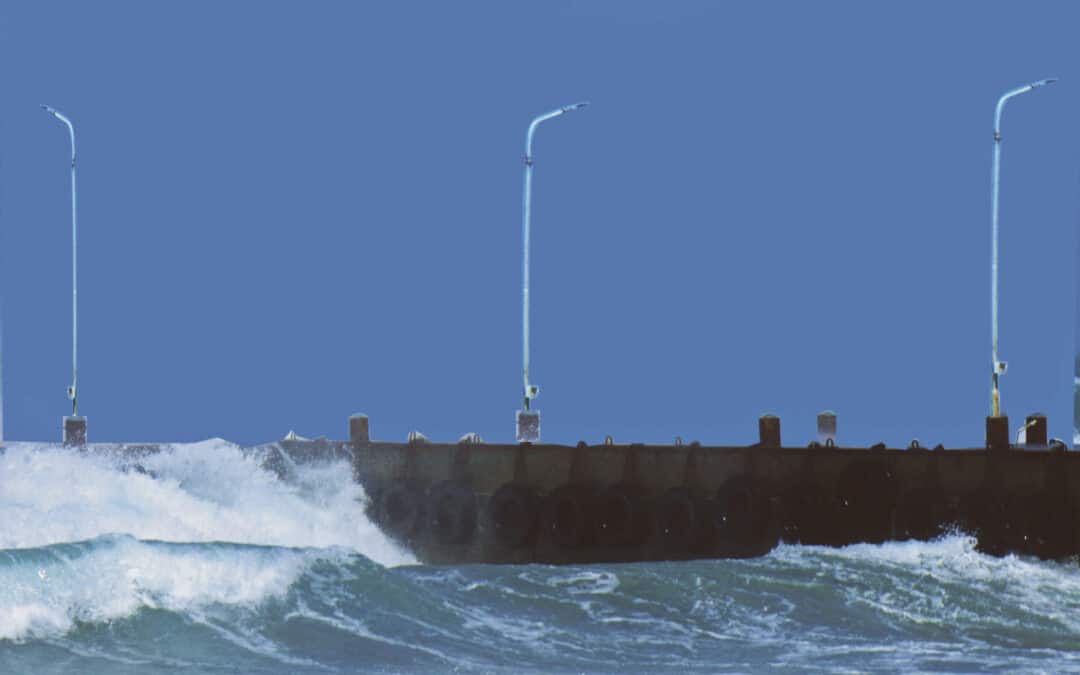 As the South-West monsoon gained strength in several parts of India (Kerala, Tamil Nadu, Karnataka, Maharashtra and other parts of the southern peninsula) throughout the month of June, wind-generated waves lashed various parts of Tamil Nadu (South India).

The effects were profound near the Pamban bridge, which connects Palk Straits (Rameswaram) to India. The sea was rough and winds blew at high velocity. In fact, gusty winds accompanied by giant waves rose above the cantilever railway bridge, an engineering marvel and pride of India.

Rail commuters were frightened out of their lives as they were only used to the gentle sway of the 2.3 km long bridge, as the sea below is usually a calm one. Further inland, in Chennai, the waves wreaked havoc on more than 500 meters of the shoreline along Pattinapakkam, a locality close to the sea. 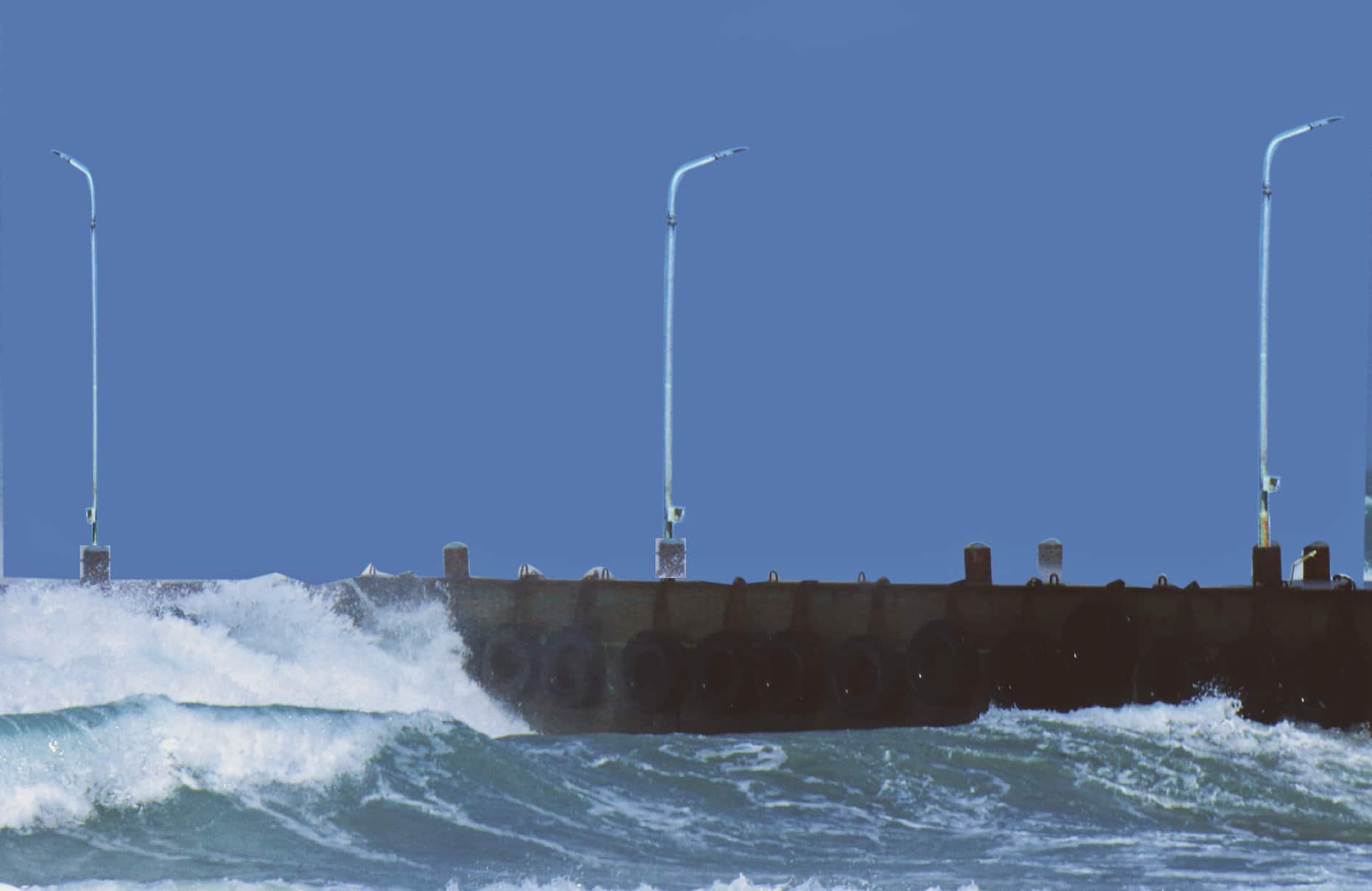 Sea Water Rising Above the Pamban Bridge Near Rameswaram

On June 28 evening, (full moon day) when the fisherwomen were going about their daily routine, giant waves crashed into their hamlet, damaging large portions of their homes. The waves unleashed large amounts of energy bringing down walls in the houses and taking away a lot of sand too. The waves rolled relentlessly for a day or two. 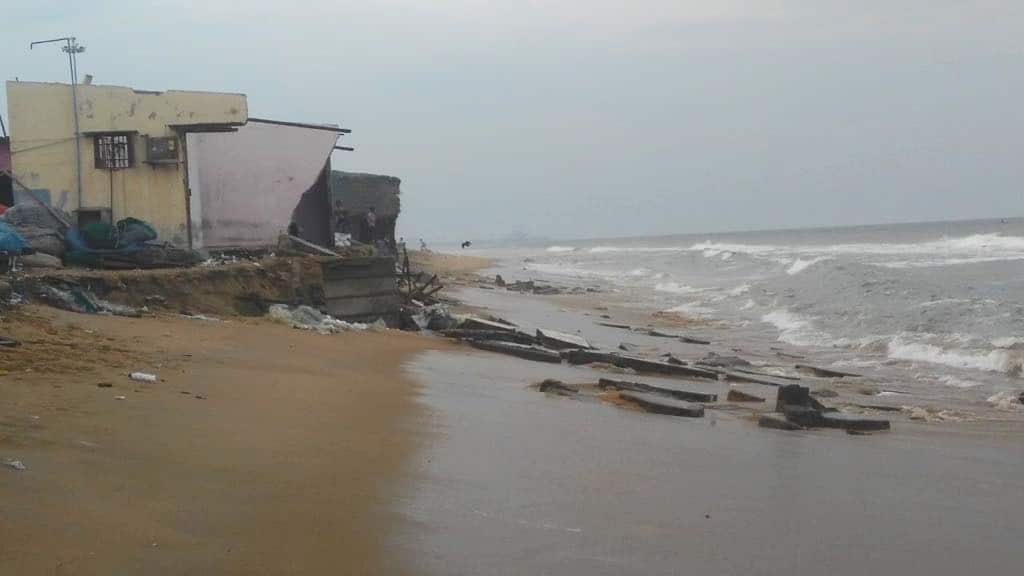 The Devastating Effect Near Pattinapakkam, Chennai

Vasanthi, a resident could hardly come to terms with the loss and could hardly excuse herself for having built her home quite close to the waters. She stood staring at the mound of debris which was all that was left of her home, which had been built with her one year earnings.

Residents of the hamlet said that sea which had been rough for more than 24 hours, finally invaded the shore shattering as many as 70 houses. Many of them were seen trying to salvage whatever they could from the wreckage after the onslaught. 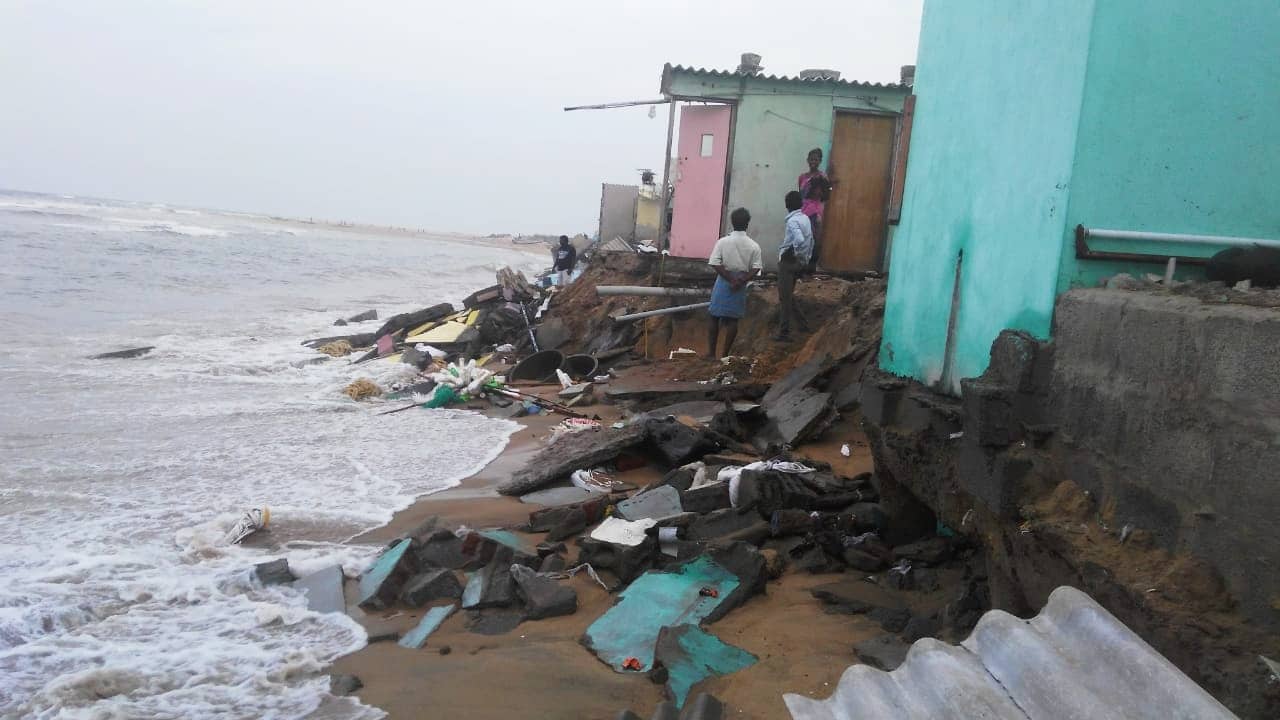 The Devastating Effect Near Pattinapakkam, Chennai

Peter Aloycious, another resident pointed out that the sea has been advancing in the last few years and destruction of houses have become a common phenomenon in these hamlets which house more than 1,000 fishermen families. “A small portion of my earnings is spent on piling sand bags in front of my house to prevent intrusion of sea water. But I have realized, that it hardly helps,” explained Peter.

Mr. Balachandran, Director of Area Cyclone Warning Centre, said it was just a weather-related phenomenon and there is no need to panic. “These are wind-generated waves which are especially strong during full moon days. They occur in a specific area based on several factors such as water currents, monsoon rain, change in density and salinity of sea water.” he explained.

The Meteorological Department official further said the phenomenon occurs as there is a constant exchange of energy between ocean, land and atmosphere. He also explained that TN coast is much safer compared to the Arabian Sea coast as the winds are stronger there and cause a heavy damage.

“For instance, high-energy swell waves, which are common during June, cause extensive damage to coastal areas in Kerala in south India. These waves are generated in a wind field, that travel away from it. In fact, they are formed miles away from the area where they would crash on land. Actually, you cannot gauge the impact till the swell reaches the shore and at times they look flat in the deep sea. But as they near the shore, they pack up energy, grow huge and land so hard that they take back huge mounds of sand with them,” elaborated Balachander. “Fishers in South India call the swell as Kallakadal, meaning deceptive sea.”

Experts in ocean science say that reasons for such rough sea condition can be ascertained only after a detailed analysis. But they agree that climate change is real and it has been causing extreme weather events in India.

They point out that we have been given plenty of warning signs by nature. “For instance, the floods, caused by heavy rain that inundated the metropolis of Chennai; Cyclone Vardah, which was the fourth and most severe tropical cyclone of 2017 that struck Andaman and Nicobar Islands and south India; severe cyclonic storm Ockhi that devastated several parts of India and Sri Lanka in 2017 are all due to climate change,” said Dr S. Srinivasalu, Director, Institute for Ocean Management, Anna University.

He pointed out that over 41 per cent of the Indian coast has been eroded due to climate change. “There is also a rise in sea level and this has submerged three islands out of 21 in the Gulf of Mannar. There is also a slight increase in ocean temperatures and acidification of sea water. This has affected fragile ecosystems in India _ Gulf of Mannar and the Palk Bay,” he said.

He further elaborated about the studies that have been conducted about adverse impacts of ocean acidification on marine organisms and coral reefs. He said Bethnic calcifiers are not able to precipitate calcium carbonate in the ocean and this has affected skeletal grown in reef-building corals. The acidification has also reduced the survival of larval marine species and this in turn has affected the food chain.

“The decrease in the carbonate ions in the water will finally lead to brittle coral skeletons and slow growth rate in coral reefs. In future, erosion of reefs may be faster than calcification. This will impact the natural eco system, food cycle and the humanity at large,” he said.

Research by universities here shows that we are likely to lose considerable land mass along the coast if do not pay heed to the alarming signs of climate change.

Environmental changes have not only impacted the life of fishers but also people of  diverse fields. The agrarian economy of the county is also facinchallenges dueue to changes in the weather patterns.

The changes in the ocean will affect the communities whose livelihoods are dependent on it. Rapid urbanization and high pollution levels near the coastal regions have a telling effect on coastal ecological sensitive areas, which actually act as a shield during tsunamis or cyclones.

But, Dr. Srinivasalu is happy that due to some proactive measure taken by the Tamil Nadu government there is a significant increase in the mangrove cover at Pichavaram (It is the world’s second largest mangrove forest located near Chidambaram in Cuddalore district). It is actually a success story created in a span of 10 years post-tsunami (that struck in 2004), said the director who has been mapping the ecologically sensitive areas in the state.

With sea water set to rise, we need a lot of natural buffers along the coast such as mangroves, creeks and estuaries. The experts opine that satellite images do show an increase in mangroves in Pitchavaram,  a coastal area near Cuddalore but we need to do implement more measures to protect us from the devastating effects.

If we fail to address the issue, the southern states will soon be grappling with issues like water crisis, ground-level ozone concentrations, change in the nutritional quality of food and so on due to irregular rainfall pattern.  “The number of cyclones lashing the south has decreased but their intensity has increased. They cause heavy rainfall in a short span of time. The result is there is heavy leaching and erosion of soil by rainwater,” said experts.

For a state like Tamil Nadu, where the influence of the sea plays a major role in society, unless concrete and long-term measures are implemented by the government it cannot escape from nature’s fury.

Tell us about localized climate changes in your city/country.