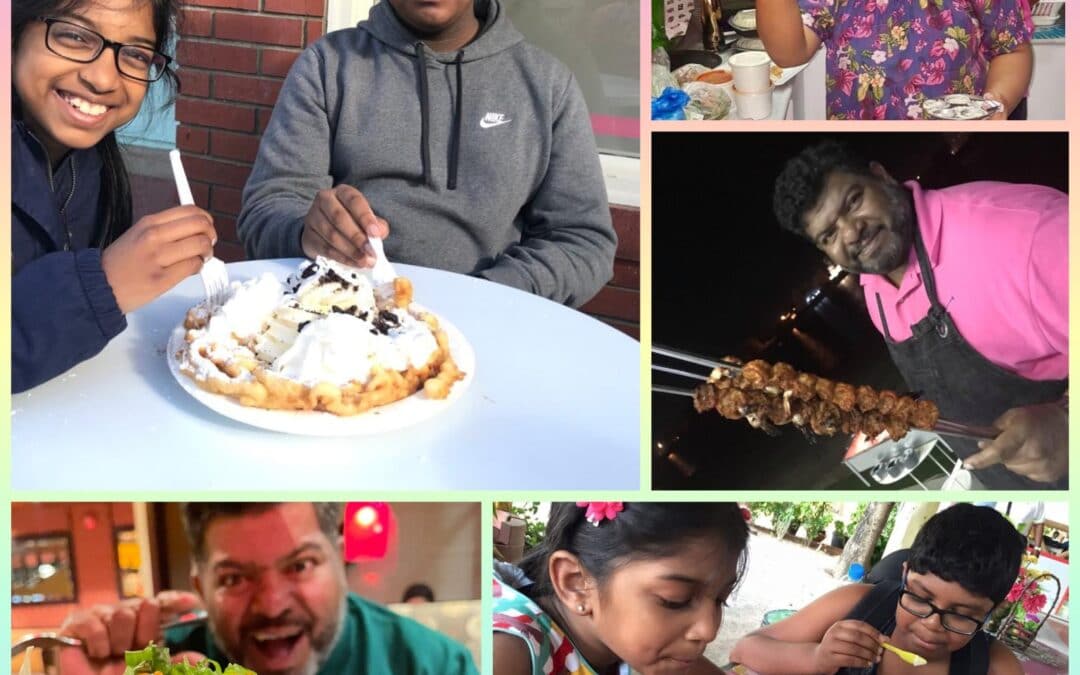 We all have BEEN THERE, DONE THAT! Rolled our eyes at other kids’ snack boxes filled with French fries, glared at kids settling down with a bag of chips in front of their TV, though there was no hope for the Mom who let her kids pick up the candies near the billing counter at supermarkets and vowed to ourselves we would never be THAT mom…

Yes, that’s how judgmental I was before I became a Mom. My ideal world had a kitchen where there would be sumptuous home-cooked meals every night, school mornings with colorful Tupperware (the coveted brand for durable plastic back in India) snack boxes filled with equally colorful and nutritious snacks of mind-boggling variety and not the same Roti – aloo (Indian bread with potato) and lemon-flavored rice that my Mom bored us to death with,  a dining table with fruit baskets filled to the brim and a family for whom dining out was strictly once-a-week indulgence!

And then life happened, kids happened.  One vivid memory from my kids’ childhood was the time when my daughter was born and my 4-year-old son was struggling with the huge changes at home. Just when I decided to return to work, he suddenly refused to eat meals, and while at work,  I would be teary-eyed and plead to my Mom (who had joined us in Kuwait to help us) on phone begging her to somehow feed him a morsel of rice ..even if he demanded to have his rice with tomato ketchup ????‍♀️. Oh and then during their early schooling years, there was the stage when I would stock my refrigerator with different canned juices and sausages of all kinds thinking these were nutritious choices for the snack box. Weekends – I was too tired to cook and almost every meal during the weekend was a takeaway or dine-out.

Then as we grew up  (yes, I grew up as a parent in ways I hadn’t imagined), we had our share of health issues (be it battling my son’s asthma, my daughter’s eczema, or my own battle with the gastric ulcer). Gradually, we navigated our way around our lifestyle and have found that balanced middle-road solutions work best. My Chef-hubby finally managed to convince us that processed meat of any kind is a big No-No in this household. He would teach me to prepare grilled and shredded chicken in batches on weekends and freeze them in small bags to make sandwiches for hurried school mornings. Our family physician bluntly pointed out to me – when your child is okay with eating fruits, why would you even give them a choice of canned fruit juices! Out went the juice cartons out of the refrigerator only to return on occasional sleepover nights. We also gained the Zen-like wisdom that we would crave for cookies ONLY if the kitchen stocked cookies. So cookies and biscuits or even my children’s favorite Indian savory snack of Murukkus or Chaklis were slowly removed from our regular grocery list. And the baskets loaded with fruits  DID become a reality in my household, the mantra being – if you are hungry, grab a fruit. To some of our friends, they still felt like extremist measures. But for a family leaning towards obesity as a genetic trait, a certain (at least a wee-bit) discipline had to be enforced.

More than anything, as an expat Asian, I have realized that sometimes in our zeal to stick to our native cuisine in a foreign land, we forget to appreciate or let our kids appreciate and enjoy the local produce and cuisine. With time, our taste buds became acclimatized to the best of Middle Eastern cuisine too. Bottles of Laban (a delicious beverage made with fermented milk) replaced the canned juices and flavored milk in their school bags. Toum (a creamy Lebanese garlic sauce) became their favorite to go with bread or rotis, instead of Mayo. Now when they return from vacations in India, the intrinsic craving is for Chicken shawarma (Middle-eastern sandwiches with slow-roasted chicken) instead of KFC or McDonald’s. We, adults, have evolved too.  The mild, yet immensely flavourful Majboos is slowly taking the place of Biryani in our get-togethers. So going local has made our palate healthy in many ways!

Sometimes, we still give in to indulgences. That urge for instant noodles hits us on occasional evenings. Some weekends, we dine out more than once. But, my day is made when my 12-year-old daughter reminds me as I gaze longingly at the dessert counter at Cheese Cake Factory, “ Amma, you promised not to order dessert.” Or when my son brings me a cup of warm water early in the morning (after having his too)  and tells me firmly to skip my morning coffee. Those are the moments when my heart swells with pride.

We may not have accomplished our Utopia, but still have done something right for the children to still make conscious choices while having their occasional indulgences.

As a mother, how have you managed to strike that balance in terms of meal planning without going overboard? Would love to hear your views.

This is an original guest post from Preeti Vijayakumar in Kuwait.

She has spent her childhood across various states of India, but finally, put her roots down in  Tamilnadu. Graduating in tourism and hospitality management, some of her best years were spent as an ecotourism professional exploring the relatively unknown parts of India and showcasing them to discerning travelers.  Marriage then took her to Kuwait and opened her world a little more, while she continued to work in the corporate travel sector.

But it was only after she had 2 kids that a sabbatical from work made her take up teaching as a stop-gap arrangement and eventually made her realize it was her calling. She now runs a small preschool in Kuwait and also teaches English to students who attend her classes more for the anecdotes and books and stories being discussed than the grammar lessons.

She loves to occasionally write on her blog and staying married to a Chef made her realize that food was one of the greatest and most creative ways of expression too. Raising a cheeky 12-year-old daughter and a rebellious 16 years older son keeps her busy writing and rewriting the parenting rules which can keep her and the kids sane.
Her reflections can be accessed at http://ecobuff.wordpress.com