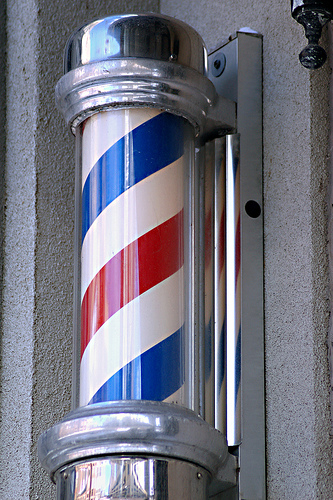 There are certain childcare responsibilities that my husband just doesn’t do.  Some things he refuses to do, like cutting the children’s nails.  So I have taken on that responsibility and have only cut flesh once!  (Still feel terrible about that.)  There are other things that he just has never done, like cutting hair.  It’s not that he refuses to cut the children’s hair.  It’s just something he’s never done.  It’s kind of like mowing the lawn for me.  It’s not that I refuse to do it.  I’ve just never done it before, so why start now?

I know that when my children’s hair is in their eyes, it bothers me more than it bothers them.  So, I have to do something about it for my own sanity.  I’ve always relied on the help of others to cut my children’s hair.  My mother gave my daughter all of her haircuts until she was four.  Then, I felt that she was old enough to handle sitting still in a chair at the hair salon without the threat of injury to herself or others.

But, my son’s not there yet.  He’s 20 months old and has a strong and willful personality, definitely not shy.  He lets you know what he does not like, and getting his hair cut is one of those things.  So, he’s only had one haircut in 20 months which was graciously provided by my patient and loving mother.  Until today… END_OF_DOCUMENT_TOKEN_TO_BE_REPLACED