CALIFORNIA, USA: Cooking with the Kiddos 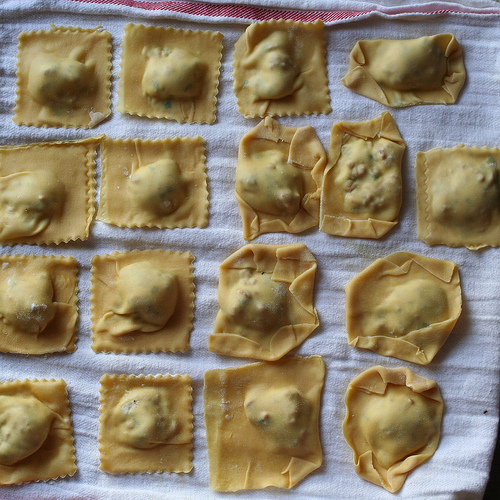 I studied business in college. Little did I know that I would one day become a short-order cook! Or, at least that is how I feel. With two young children and a husband who works a lot, I spend most of my days in the kitchen.

Thankfully, I love to cook! And not to brag, but I am a pretty good cook…except for the night I served “rubber chicken”, as my husband called it.

I haven’t always been good in the kitchen. When I first met my husband, my idea of cooking was dumping a bag of frozen vegetables in a wok and giving them a toss and – Voila! Dinner!

He referred to my meals has “human food” as there is “cat food” and “dog food” – something one would eat purely for survival. Thankfully, after many years together and many issues of “Bon Appetit”, I have found my inner chef — who still overcooks the chicken from time to time.

I grew up in North Eastern Pennsylvania surrounded by family and extended family. Every Sunday we all gathered at my grandparent’s home for dinner – my parents still do to this day. Each Sunday, my grandfather would cook dinner. My grandparents were first generation from Italy, and they cooked meals that their parents cooked for them.

We often ate pasta with red sauce. Every meal had a salad. I can clearly remember sneaking tastes of the red sauce as it simmered on the stove all day. And, I remember us all helping make homemade ravioli in the weeks before big holidays. This year for Christmas, my grandmother bragged that they made over 200 ravioli. My grandfather was the mastermind, and we were his line cooks.

But, I don’t remember them ever teaching me to cook. It is probably because most of the cooking was done by feel.  One day I had my grandfather write down his ravioli recipe – I simply got a list of ingredients. Thanks to Ina Garten I was able to cobble together the measurements.  Cooking is a skill I had to learn myself through successes and failures. And, I am hoping to teach my girls.

I have read that if you include your children in the preparation of food, they are more likely to try it. So, I have. I quickly learned probably why my grandparents didn’t involve me. Because it takes twice, sometimes, three times longer to have a child “help” you in the kitchen.

It is an activity that you need to be prepared for, and it’s best that you are not on a schedule or it be critical that what you cook is not going to be the only thing you eat for dinner.

So starting at about age 2, I have let big girl help me cook. She is usually in charge of “dumping” “castles” of flour into the bowl or “mix-a mixing” the ingredients together. She is almost always willing to get involved when I am making cookies or pancakes. When healthy, growing food is involved, she would rather go and play.

I feel it is important for my girls to eat well. So, as a rule, I serve a hot breakfast every morning. No bowls of cereal and milk in this house, which is often a hard way to start the day. (I sometimes cheat and serve frozen waffles.) I then prepare a lunch – meaning I cut up fruit and cheese or serve a bowl of yogurt. And then, I, or on pizza night, my husband, make dinner. With two snacks in between, I end up spending most of my day in the kitchen: either preparing a meal, serving a meal or cleaning up after a meal! And, as I am finishing up one, I find myself planning out the next.

My frustration with big girl runs high on the nights that she won’t eat her food. Not even a bite! I have tried hard to prepare kid-friendly meals that the whole family can eat. I really don’t want to cook two dinners every night.

But, there are often times when she won’t even try it. I have used incentives like dessert. We have tried instituting the “no thank you bite”. We have even sent her to bed without dinner.  Most nights she simply eats a bowl of yogurt since I refuse to cook or prepare her anything else. Thankfully, little girl will eat anything and will often clear her plate and big girl’s, too.

The other night my husband made them pizza for dinner. Big girl declared, “Dad, you did a good job”. I jokingly thought, what about me? I cook for you every night! I am not looking for a thank you or a pat on the back. What would mean more to me is if they learned a few recipes from our past and appreciate food for its nutrition and flavor!

Do you get your children involved in the cooking?

And, do you find yourself cooking two dinners every night to agree with everyone’s taste buds?

This has been an original post for World Moms Blog by A. Roselyn of California, USA.

Photo credit to http://www.flickr.com/photos/whitneyinchicago/3932950246/.  This photo has a creative commons attribution license.