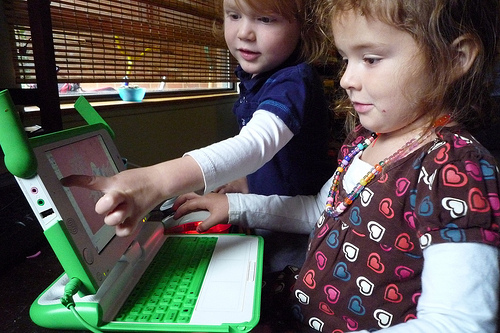 It’s 3:30pm. My youngest son of five and I have just piled through the front door, bags of groceries in my hands and his lunch tin in his. He scrambles off to the kitchen, and the first thing he does is to not look for a snack. Instead, he starts playing a game on my computer at the corner of our kitchen.

3, 2, 1…There it is: “Can someone please turn on mom’s computer for me?”, he yells, banging his fists on my desk. There is something wrong with this picture, I realize.

He’s five years old. When my other two children were five, their days were filled with playing outside, quietly entertaining themselves with board games and such, or tugging at each other’s hair.

My daughter would make a bed in the laundry basket for my son, and he would run around with a backpack filled with toys on his shoulders. They had each other to entertain themselves as they were only two years apart, and for that, I am extremely grateful.

I suppose the difference in ages between my two oldest and my youngest son brings both some advantage and disadvantage. He knows much more about computers than his siblings when they were his age. He can handle a digital camera and recorder; he can open up a web browser to get on his favorite, Lego.com, without my help.

But all the same, when did a child have to turn to computers and televisions and portable electronic games to serve as a playmate? As I am writing this, I know my older son is in the basement and playing Xbox 360. My daughter has to check her page on Facebook before she goes to bed.

We can’t survive without technology. The 21st century evolved somewhat slowly at first, but now, it’s racing at the speed of light. And, it is through this youngest child of mine that I realize how magnificent and yet so viral this digital age can be.

There is hardly a moment when he’s not sitting at the computer or lounging in front of the television, if I don’t stop him. And if he isn’t, he’s sitting in the living room on that portable electronic game of his. It’s not even his eyesight that I worry about as much anymore—it’s his imagination and creativity, and his sense of holding on to the non-digital parts of childhood.

So, I started hiding the mouse of my computer, his Leapster game and any electronics.  But, the biggest problem is that I forget where I hide them! And, I hate to admit it, but I do need him to be occupied for those 30 minutes so that I can finish cooking or helping my older children with their homework.

It’s such a shame that he’ll never really know what it’s like to not have computers as advanced as the one I write this post at. The other day, my daughter brought up the board game, Chutes and Ladders, for her to play with him. When she was his age, it was the only game she ever wanted to play.

When she played the game with her brother, however, it lasted only five minutes—he was so impatient with being away from the computer that my daughter, frustrated, just let him be.

I blame myself for a lot of it, though. I’m a heavy user of my computer, checking my e-mails and what not. With English as my second language, I naturally prefer e-mails instead. I can’t stand to hear an awkward silence over the phone. Oh my lord, it’s my English, isn’t it? No matter how hard I try, there are always some words so difficult to say right.  R and L. They are my archenemies.

My son doesn’t know the world that my other two children lived when they were smaller — the world of playing in the weather of all seasons, the world of board games and “House” and action figures, and even the world of imagination to a lesser degree.

This is not to say he doesn’t know anything other than TV. He does other things—he loves to draw, build Lego and experiment with a chemical test kit that he recently got for the Holidays.

And, he has a lot of hand me down toys from my older son. But, he’s going to outgrow them before I can even catch my breath. And, what am I going to do? Am I going to pack up his toys for some charity organization just like the movie of Toy Story 3? I shudder at the thought.

How do you feel about children and technology?  Do you embrace it, or hold back?

This is an original post to World Moms Blog by Sunny Springer, our Japanese-born American mom from New Jersey, USA.

Photo credit to http://www.flickr.com/photos/tim_and_selena/5051157647/.  This photo has a creative commons attribution license.