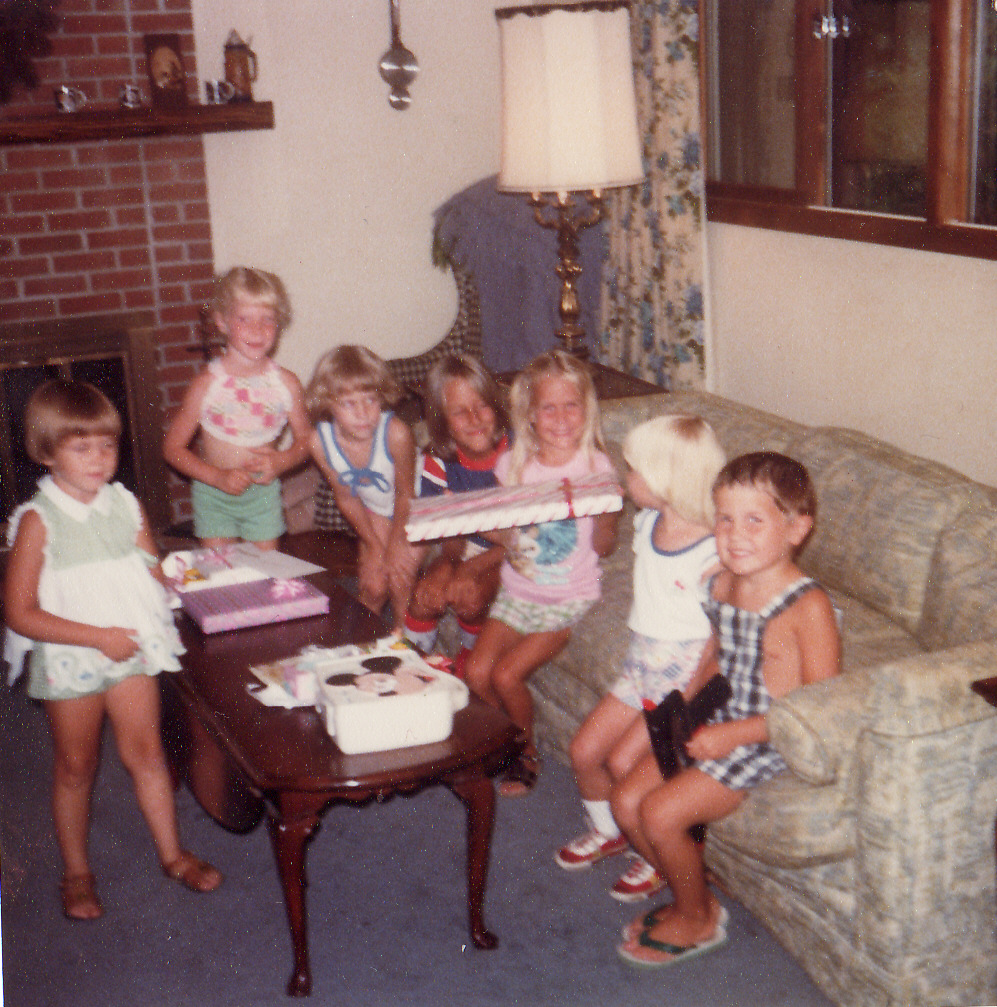 My parents threw me one birthday party when I was around 4 years old.  I don’t remember much from the party except that it was an exceptionally sunny and cheery day.  I remember running around outside with my friends, and that is about it.  I am certain there was a cake and gifts.

I don’t think we played any games, and there certainly weren’t any party favors.  Were there balloons?  Maybe… Streamers? Doubt it.  I am the youngest of three children, born in the mid 70’s, so I am betting my mom kept things fairly simple.

I just survived planning and executing my oldest daughter’s 6th birthday party.   It took me one full month to put the whole bash together.  I had big plans for her this year, big plans.  You see, last year for her 5th party I really tried to knock it out of the park.

At the time she was really into the Disney princesses and fairies of Pixie Hollow.  So, I tied the two ideas together and created a princess/fairy theme birthday party for her. (See pictures here of her Royal Gala: http://www.tableof4please.com/2010/06/royal-gala.html)

My husband said to me after I survived planning and executing that party, “How are you ever going to top this one?”  I thought to myself, I can’t.  No way.  That, my friends, was my swan song.  I was proud of what I put together for her.  I thought some of my ideas were quite unique, like having the girls walk down a red carpet on our driveway.  I thought, how much more creative can I get?

So the pressure was off of me.  I convinced myself that there was nothing better that I could put together to dazzle her.  I was wrong.

Each month I teach my girls about a famous artist.  Back in March I started reading about Frida Kahlo.  I became enamored with her.   Even though I didn’t have Frida on our home-schooling schedule to teach my girls, I decided to talk about her with my oldest daughter anyway.   Sydney, my oldest child, became enamored with Frida, too.  She loved the fact that she wore flowers in her hair, loved that she wore 20 rings at a time, loved that she lived in a house known as “casa azul.”  Sydney and I would just sit and look at Frida’s art and talk about her for long periods of time.

So, one morning at the end of March I asked Sydney if she would like her 6th birthday party to be a Frida Kahlo theme birthday party.  The girl about jumped out of her skin, she was so excited.  “YES!”, she exclaimed.  OK, so a Frida theme it is! My daughter’s birthday is at the beginning of June.  I had plenty of time to brainstorm.

I found another mother on the internet who planned a Frida theme party for her 8-year-old.  She made an incredible Frida Kahlo piñata.  I thought, yeah, I can do that… only thing is I’ve never done papier-mâché before.  I then went onto Etsy.com (a website that makes homemade items) and typed in “Frida Kahlo.”  There were these remarkable 4 ” wooden Frida Kahlo dolls that were $45.  Ridiculous! I was not about to pay $45 for one 4″ wooden doll.  I decided that I was capable enough and had enough time to research and prepare to make papier-mâché Frida Kahlo dolls.

So, off to the library I went.  I went to the children’s section of the library and checked out books on papier-mâché.  I came home, read the books and was amazed at how extremely simple papier-mâché seemed to be.   Was it simple, you bet ya!  It was so super easy, yet, very messy.

I made a large Frida doll and four small Frida dolls.  Take that $45 wooden dolls!  After the papier-mâché dried, I painted them using acrylic paint.

Being that it was my first time ever trying papier-mâché, I was quite pleased with the outcome.   So much so that I don’t know if I’ll ever be able to take them down.  They are my first real attempt at making art and now these Fridas are such a part of me.

Now that the Fridas were done, what else was I going to do?  Since Frida was born in Mexico, I decided to make homemade papel picados out of tissue paper to decorate the entire house.  I had no idea how to make papel picados.  I went onto youtube and found this video: http://www.youtube.com/watch?v=SjSU9E-KI48.  They made making the papel picados a real snap.  The papel picados were colorful and added such an authentic touch to the party. 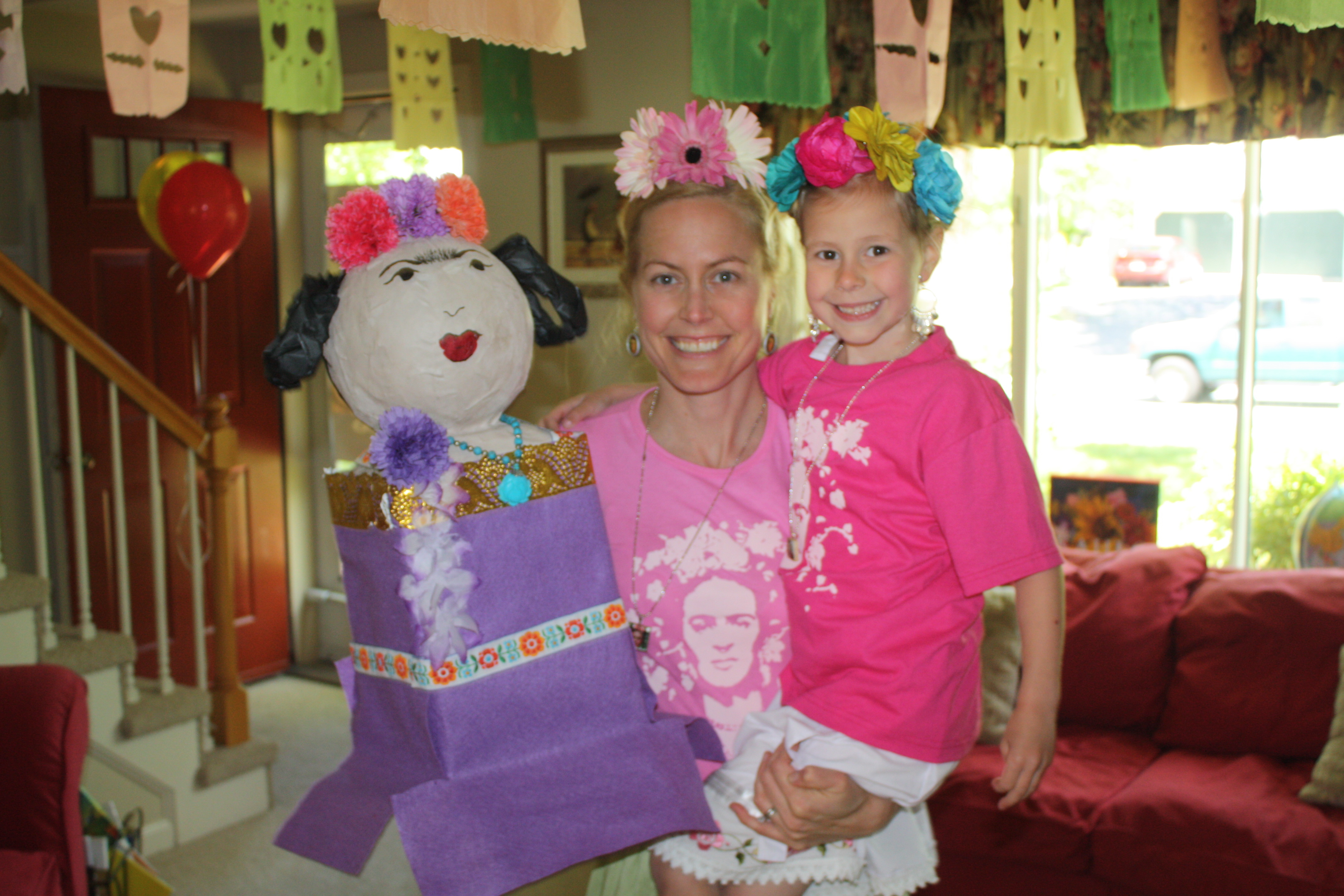 I really wanted to add more of a personal touch to the party.  Frida was known for wearing flowers in her hair.  I went to Christmas Tree shop spent $2 and got 12 headbands.  I then went to a local craft shop and purchased fake flowers.

Another personal touch I added was making homemade Mexican flag place-mats.  I taped green, white and red construction together.  Then, I printed off the coat of arms of Mexico and taped it on the place-mats.  Simple craft and a nice nod to Frida’s homeland.

One of the last crafts I worked on for the party was painting Popsicle sticks a variety of colors.  I used my handy glue gun and glued them together to make small painter easels.  I purchased Frida postcards and put them on the little easels to decorate the party. 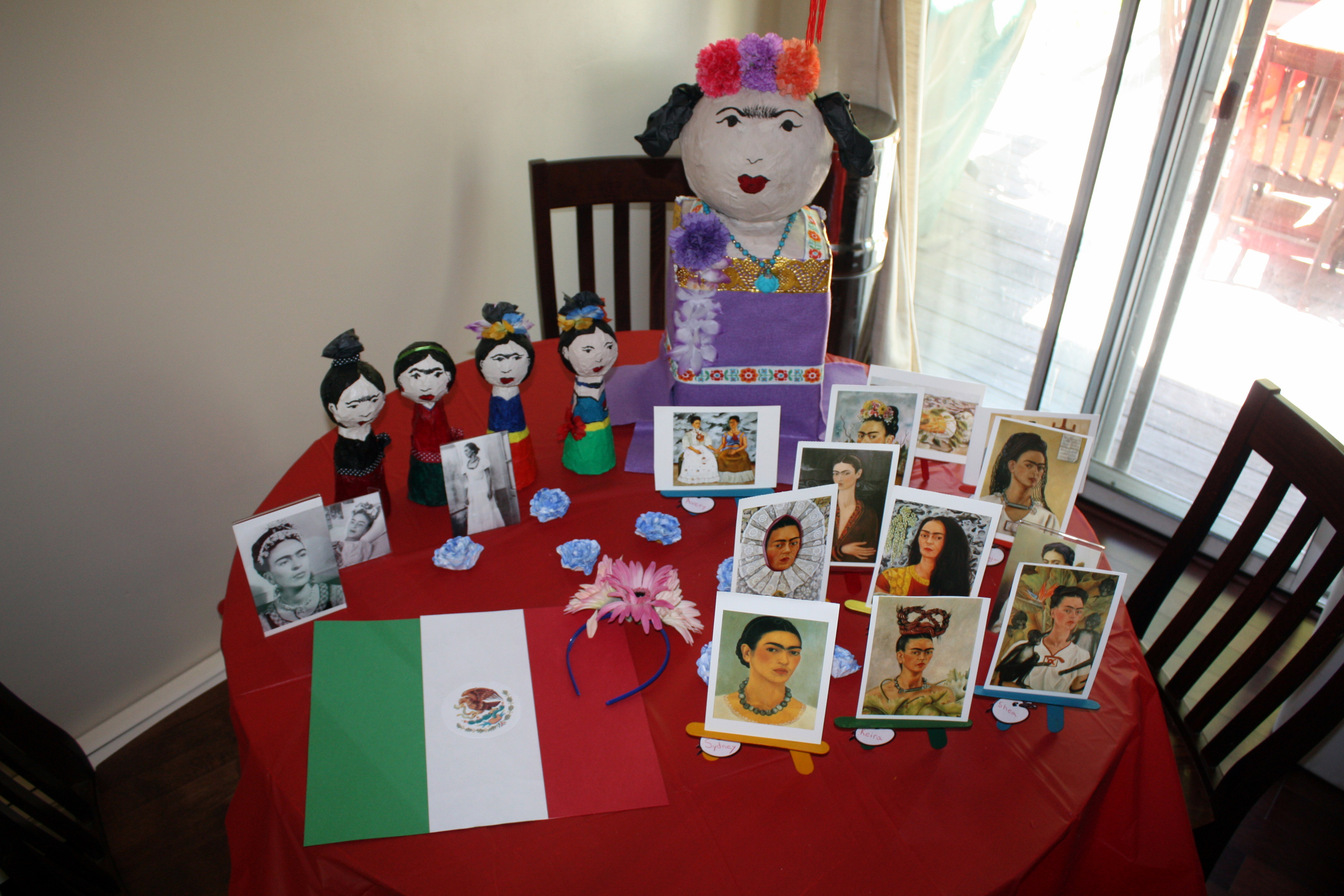 The party was a huge success.  My daughter told me it was one of the best days of her life.  Her larger than life smile on her face the whole day made every late night for a solid month completely worth while. 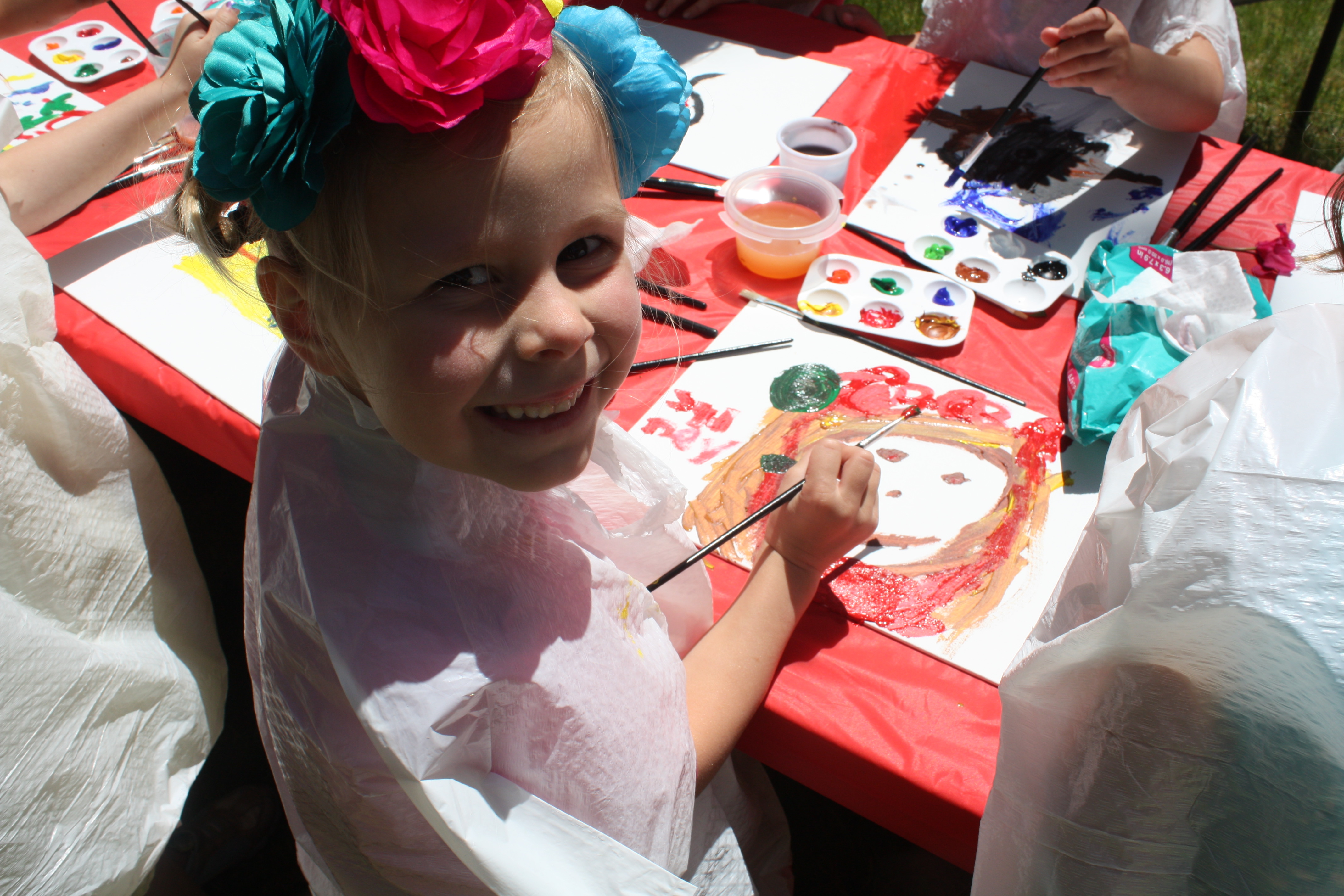 Would she have been happy with just friends, a sunny day and some balloons?  Yes, of course she would.  But, I am one of those artsy moms, I’ve found my inner creative energy bursting out of me these last two years.  I have no desire to bottle that up!  If you are interested in viewing some of the pictures from the party, click here: http://www.tableof4please.com/2011/06/frida-kahlo-theme-birthday-fiesta.html.  Viva la Frida!!

What do you do to celebrate your child’s birthday?  Do you think parents these days go overboard planning their children’s birthday parties?

The photographs used in this post are attributed to the author.