Friday Question: How do you handle bad behavior in a friend’s child? 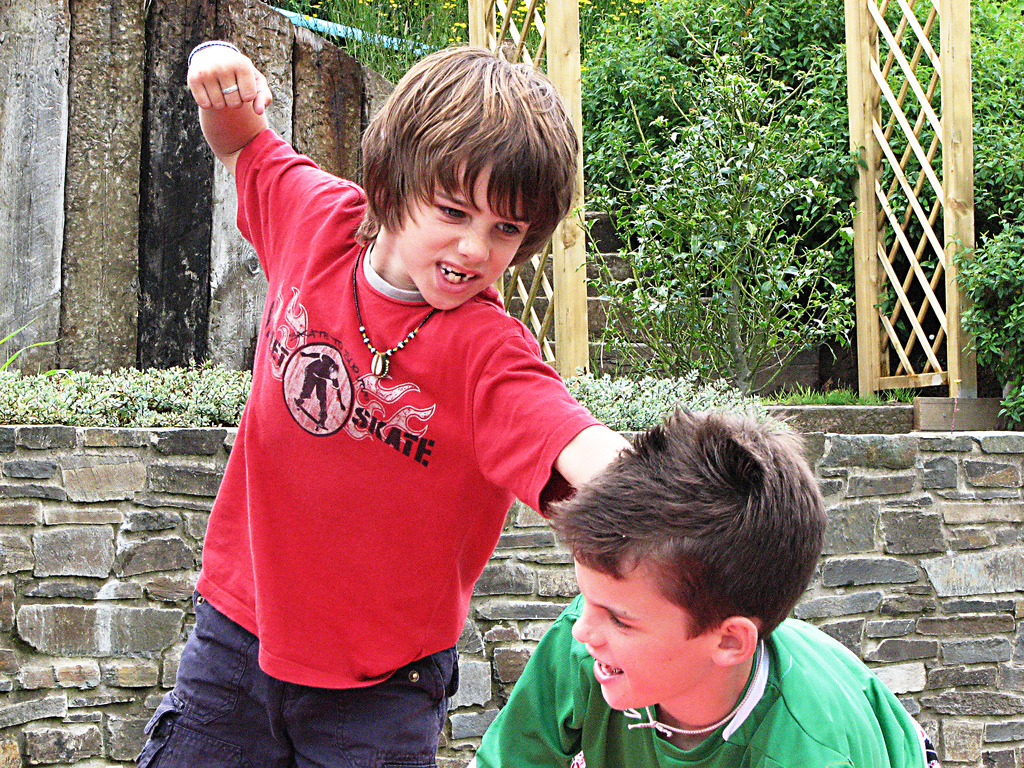 “How do you handle (what you deem) bad behavior on the part of the child of a friend? If you don’t just ignore, what have been the consequences?”

Carol @ If By Yes of British Columbia, Canada writes:

“Assuming the friend is present, I ignore it for the most part, even if I disagree with my friend’s way of handling it.”

Alison Lee of Malaysia writes:
“I’ve not had much experience with that, but the times I have, I have left it up to the parent in question to deal with their child’s bad behavior. I did not, and generally do not feel comfortable intervening in someone else’s family and their children’s behavior.

The only exception I would make is if that child’s bad behavior is affecting my child. I would say something firmly to that child, and inform his/her parents of my actions and what led to that. I think dealing with the situation calmly and reasonably is key, and treating the parents with respect.”

Dr. Lanham of Arizona, USA writes:
“I haven’t been in this situation before. Glad, too!”

Inspiration to Dream of Australia writes:
“If the child is playing at my home and the parent is doing nothing, in most cases I will inform the child nicely ‘in my house my boys aren’t allowed to do (whatever it may be), so please don’t do that’.  If it’s said lightheartedly in every case so far this has worked for me.

If we’re out and about, I generally try to stay out of it.”

Ambre French of Norway writes:
“If it is general bad behaviour (hitting, stealing, spitting …) I would say something (in a soft way of course), because my friends and I have the same values. But if it was more subtle, more related to types of education then I would wait to see if the parent reacts, if they don’t, then it would depend on where we are: if the child and his family are guests of ours, then I would smile and say something like “you know here, in this house, we don’t … “. If I am in a neutral place or at theirs then I wouldn’t say anything but I would make sure my kid behaves (always easy to say)! The reverse question is also interesting because I don’t know how I would react if someone else said something to my kid :D”

MamaRobinJ of British Columbia, Canada writes:
“This came up with a friend the other day – she had an issue with her neighbour’s kids running their trucks over a bee. She tried to explain that we don’t hurt things that are alive, but ultimately that’s a really tough situation if you don’t know the kids or their parents well and the parents aren’t present.

I feel really lucky on this one because we take a very community approach to parenting in our main moms’ group (parent group actually, because my stay-at-home-dad husband participates more than I do). It’s that it-takes-a-village thing and we have similar philosophies, so if one kid is acting badly, the nearest parent usually steps in. If it requires more serious intervention or a timeout the child’s parent will take over. It’s a wonderful thing, because we never have to worry about whether we’re going to end up in an awkward situation over dealing with “bad” behaviour.”

If the behavior becomes repetitive, I have talked candidly with a parent about what is happening and suggested a book I have read. That was an easy conversation because the mother was a friend of mine, and we could talk candidly. It would have been much more difficult with an acquaintance.

This is a tough question!”

Jill of Illinois, USA writes:
“It’s funny, I haven’t considered this to be much of a problem. Not that there isn’t any monkey business on the part of the kids in my life, but most parents I know simply want the best for their kids and that includes the best behavior. There doesn’t seem to be a tangle if any mom in the group reminds a child to slow it down or knock it off.

My kids are 4, 6 and 8 years old — school aged — and I find that by this point most parents are more comfortable with others stepping in if someone acts up. Also, we tend to hang out with families that have two or more children and since the kids outnumber the parents, any parent that sees something will say something.

We spend time with families that have similar values, so we don’t find ourselves struggling with conceptual differences.

If you see my daughter trying to ride your dog pony-style, feel free to tell her to stop!”

Courtney Cappallo of Massachusetts, USA writes:
“If the parent of the child is present, I let the parent handle the situation and I back them up on what they are saying… as long as I agree with what they are saying! A few times I’ve caught my oldest daughter being bullied and a few of those times I’ve intervened. I explain to the child that it is important to use nice words, keep our hands to our own bodies and take turns.

Other children use different language than mine do, like “stupid” or “hate” which are two words my children are not permitted to use. If I hear other children use those words I correct them right then and there, I don’t care if the other parent is present or not. I am not trying to be rude or over step my boundaries, but I do say to them, those are not nice words, they are bad words and we don’t use those words in our house.”

Polish Mama on the Prairie of Illinois, USA writes:
“This is one of those topics that I try to avoid.

I agree with Courtney Cappallo in how I parent. I believe in the “It takes a village” mentality. While I won’t step in if it’s something non-violent, if it is something like a child hitting another child, cursing, breaking something, or killing or harming an animal or bug, etc. I certainly will. I won’t scream at the other child but I will say with my eyebrows raised “Excuse me, but that is innappropriate. We don’t hurt others.” I make sure the parent can hear me clearly so there is no confusion on what I said. I also have no problems with another parent doing the same with my children.

The only time I don’t do this is if it is clearly the type of family that curses, hits, and generally are the type to avoid. If I see a family already doing this sort of behaviour in a social situation as I am approaching, say the playground, I leave because I don’t want my children seeing others cursing and hitting one another.”

Karyn Van Der Zwet of New Zealand writes:
“I tend to allow my friends to deal with things their own way. If I am looking after the child and the friend isn’t there – I’ll generally ignore it or, if necessary make a comment in a firm tone of voice, but it happens rarely.”

What about you…how do you handle bad behavior in a friend’s child?

If you come back on Saturday, Jennifer Burden, World Moms Blog founder might have a wrap-up from this week’s posts…but if motherhood calls and she doesn’t get the chance to post, you can definitely come back on Sunday to take a peek at next week’s travel itinerary!