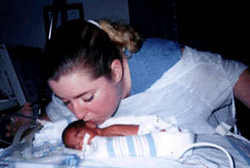 The one who couldn’t protect him, when close to my own death, I was forced to undergo an emergency open appendectomy. Despite receiving a lower dose of pain medicine for a horribly excruciating surgery, the stress of the ordeal sent my body into preterm labor. I failed Elijah at every turn.

Despite looking perfectly like a tiny baby; dark brown skin, huge brown almond-shaped eyes and the softest jet black hair that covered his entire body, Elijah would never get the chance to grow up. I would never know who he might become.

The worst part of this unforgiving, steamy July day was that his death came at my hand, as I was the one who signed the order to remove his ventilator. It was me who was choosing to let him die instead of rolling the dice and waiting to see the extent of his brain injury.

Even hearing all of the best advice from his team of doctors and the extremely kind hospital chaplain, as a single mother, I was the one responsible for terminating Elijah’s life support. At 24 years old, that was (and would remain) the hardest decision that I would be forced to make.

Simply, there was nothing heroic in that action.

All of these years later, I believe that I made the right and most humane choice for  Elijah. Time has blurred the edges but the important details remain vivid: he had a grade 4 ( the most severe)  intraventricular hemorrhage on the left side of his brain and a grade 2 on the right side.

He was developing hydrocephalus and required surgery for a shunt to be placed in his head. The experienced doctors at Arkansas Childrens Hospital (which is world-renowned) explained the low chances that Elijah would ever walk, talk, see, speak, sit up or eat on his own.

As my mother, a seasoned RN,  plainly told me,  “He may have quantity of life but he will have no quality of life”.

There are various lessons from his death that, with the distance of time, I try to carry out in my life. After experiencing all of the stages of grief, I feel like I am able to comfort a mother in her mourning and metaphorically, walk in her shoes.

Personally, I can’t imagine anything greater than the loss of a child. Therefore, I am taken aback when mothers commit violence against their children.

Unless you live in an extremely remote location in the world that has no television, radio, cell service or internet, then you are probably familiar with the Casey Anthony trial. I am keeping up with the trial almost obsessively,  even following during the work day via Twitter. Many would say that the over saturation by the media is what has drawn people to follow the Anthony case.

However, for myself, I can’t fathom how a mother could actually kill her child. It’s not just the Anthony case either, any news report of a mother who kills their child has my full attention. And perplexes me in ways that I can’t process.

The decision to end Elijah’s life was more difficult than I can even explain in words. Just writing about it has me in tears as if it happened yesterday.

Even though I wouldn’t classify myself as heroic, I am grateful that I had the wisdom to not allow my child to needlessly suffer. He was cradled in my arms as he died, surrounded by love. As his mother, there is great solace that in his final  moments, I was there to protect him.

Have you ever been in a position, where you had a difficult decision to make when it came to your child?