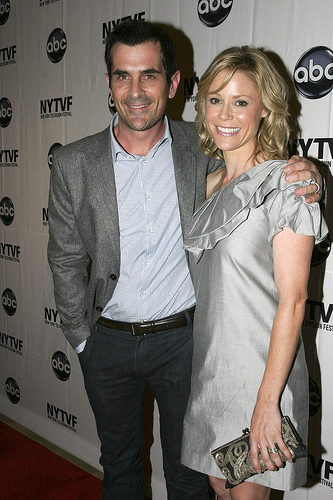 On a typical Wednesday night, I’m getting home from work at around 8:30 pm, having a glass of wine, and watching the sitcom, Modern Family, with my husband.  By the time I get home, both kids are already asleep, and I’m exhausted after a long day.

This aforementioned day includes taking my daughter to and from a three-hour stint at preschool, while making sure my two-year-old son doesn’t cause grave injury to himself (or me for that matter).  Then, at 3:00 pm, the babysitter comes over, and I’m off to work until 8:00 pm.

I know that a lot of other women juggle much more than I do, but keeping two children clean, clothed and fed, while chipping away at the household chores, is more than I can handle sometimes.  That’s why it’s so refreshing to watch a show like Modern Family, where it’s okay to be a mom with imperfections.

From the dawn of television, the TV mom has been portrayed to be something that most women cannot live up to.

In the 1960’s, the mother represented on television was a stay-at-home mom whose hair and makeup was perfectly done when she served breakfast to the family in a form-fitting dress.  I’m lucky if I’m out of my pajamas during breakfast, never mind the hair and makeup.

The 60’s sitcom mother was never overweight, and she never raised her voice.  She was beautiful and appeared to be perfect.

The 1970’s brought us The Brady Bunch and The Partridge Family.  Carol Brady, the mother of three daughters and step-mother to three sons, was a stay-at-home mom who had a maid, Alice.  Must be nice.  The Brady’s had their struggles, but there was always a happy ending at the end of every episode.

Shirley Partridge, a widowed mother of five, sang in a band with all of her children.  This single mother was able to support her family by touring with them on an old school bus.  Both of these women were far groovier than I could ever imagine being.

The 1980’s brought us Elyse Keaton of Family Ties, an independent architect and mother of three, and Clair Huxtable of The Cosby Show, a lawyer and mother of five.  These working moms somehow managed to have exciting careers, look great, and still be present for their children.  They were happily married to successful, supportive, and loving men.  They made little girls everywhere believe that they could literally have it all.

Then came the 1990’s and a breath of fresh air named Roseanne Conner.  Roseanne was also a working mother of three, but she worked in a factory and her family’s financial struggles were a part of their everyday lives.  The Conners were a blue-collar family who were far from perfect, which is probably why they were so popular.

Roseanne was overweight and grouchy.  She made us feel good about our own imperfections.  As bad as things may have been, at least we weren’t like the Conners.  Although Roseanne was fun to watch, I don’t think many women could relate to someone as eccentric as her.

That’s why I love Claire Dunphy of Modern Family.  She’s a stay-at-home mother of three, happily married (at least most of the time) to Phil, a real estate agent.  Although she is thin and beautiful, we see her imperfections.  Claire sometimes loses her temper and yells at her husband and her kids. When she’s sick, we see her lying in bed watching television.

She [Claire Dunphy] doesn’t miraculously juggle a successful career and motherhood, even though her children are all school-aged.  She actually sometimes mourns the death of her career; a career she gave up in order to be a stay-at-home mom.  She’s human, and she lets the rest of us know that it’s okay to be tired; it’s okay to be sick; it’s okay to be in a bad mood.  And, that’s what I love about her.

None of us are perfect, but there certainly are societal pressures put on mothers to juggle it all – the husband, the kids, the career, the looks – perfectly.  It’s simply an impossible task.  Anyone who seems to “have it all” is either faking it or miserable.  I truly believe that.

Clair Huxtable is fictional, but Claire Dunphy has a refreshing realistic side to her that, as a mother, I truly appreciate.  So, I look forward to my Wednesday nights, when I know I’ll have a good laugh while relaxing with a glass of wine after a tiring day, which was all worth it.

What are your thoughts on the way mothers have been portrayed on television?  Are the expectations put on mothers unrealistic?

Photo credit to Rubenstein. This photo is copyrighted by Rubenstein and made available for use under a creative commons attribution license.