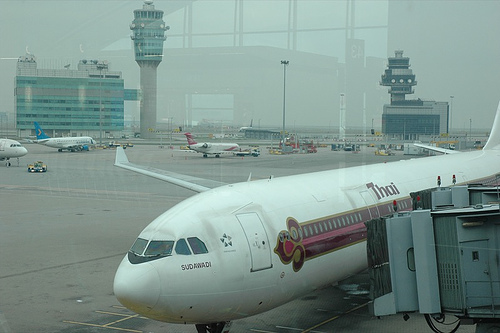 The name of the Saturday column is now…“Saturday Layover”!

This name was inspired by Mama Robin J of Canada who said, “Or something along the lines of After the Trip – to relate to the travel itinerary that starts the week off.”

She gave us the idea to tie the name into the theme of our weekly travel itinerary, where Kirsten Doyle announces our schedule for the week to come.

We had over 20 suggestions for the column name, and they were narrowed down to the four below.  Twenty World Moms Blog writers participated in the voting and here is how it went:

It was close! Thank you to everyone who participated!

So, last week I mentioned that I had written a little something on my personal experience with race relations. As promised, here goes…

A quote that I recently saw on a friend’s Facebook page has stuck in my head:

‎”We don’t see things as they are, we see them as we are.” ~Anaïs Nin

I believe that we are all products of our experiences.  By sharing our experiences, we can understand the world around us better and bring to light what others are feeling and how that affects their parenting. Or, in turn, how our reactions to what they write affect our own parenting.

It’s so interesting to have “That happens there?” and “That happens here?” moments on the blog. Those moments are so fascinating to me! Do you feel the same?

I think of myself as an open-minded mother, but I do recognize that I’m not without my biases and naivety based on my own life experiences. And, reading this blog, I feel, is helping me grow as a person, and as a mother.

So, to keep on topic (I go off topic often!) here’s an experience that has and will mold my parenting…

I’m going to take you back to a college (university) experience I had in the mid 1990’s.  Those of you that have gotten to know me, know that I get bored in life very easily, and that makes me very curious.  I long for deep conversation and to hear about different experiences (which is probably what led me to start this blog in the first place).

One day, a white guy friend who I was a little more than friendly with abruptly stopped talking to me.  I had no idea why.  I thought it was for a different reason than I later found out it was, so I was being overly nice to this guy, thinking that I offended him.

Turns out, months later, he told me that he saw me letting one of my black guy friends into my on-campus apartment.  He said, “I assumed you were sleeping with him.”  Mind you, my roommates and I had let many white guy friends in and out, and there was no problem or speculation with that.

He stopped talking to me because he thought I was sleeping with a black man.

Let me tell you why my black friend visited me so often in the privacy of my apartment.  He was giving me dancing lessons.

Only stepping on toes.

There were also deep conversations about black people’s music, and he asked about the type of music that I grew up with.  He was together with one of my friends, so intimacy was never an issue.

That’s not all.  I had a similar experience when I was approached by friends and told that I should stop hanging out with my black friends because I was getting a “reputation” on campus. What?

I was not against having a relationship with one of my black guy friends, but nothing ever materialized.  These were false assumptions.

But, I sure wasn’t insecure enough to feel threatened by a “fake reputation” based on someone else’s racist thoughts to ever change my behavior, and I hope to raise my girls to be just as strong in defending their friendships. (But, I definitely am still a little insecure about my dancing.)

Now that I’ve had a week to stew on the story I wrote above, I have some more thoughts to add.  I mentioned that I was writing something on race relations.  But, can’t this apply to more than just skin color?  Each and every one of us is different in some way or another, from variations in what we look like, what we can do and what we believe.  The point is that no matter what the difference, how do we raise our children to not discriminate?  How do we raise them to accept and appreciate being different?

The book, Nurture Shock, talks about the importance of parents talking with their children about race…that many parents are waiting until it’s too late to make an impression on the child to have these discussions.  The earlier, the better, according to the book’s research.

So, I’ll be trying my best to talk about differences among people, including skin color, with my children, instead of pretending that differences don’t exist all together.  In the end, we’re all humans!

(Am I the only one out there that writes and then holds their breath and hopes they make sense?)

Now onto the week in review…

Monday was Independence Day in the USA, and I volunteered to write a post about the 4th of July. I want to hear all about your country’s national holidays, too!

How is it getting out the door with your child(ren) in the morning?  Tara B. in Seattle, Washington, USA, gave us what a typical morning is like for her in the humorous, “Morning Shenanigans.” Be sure to check out her interpretive self photo that goes with this post!  This was a post that many mothers related to! 20+ comments

Do you remember what it felt like to send your child to daycare or school for the first time?  Or, is that something you will be doing in the near future?  On Wednesday we read about Asta Burrow’s experience in Norway of sending her son to nursery. Stop by her post and offer her some support!

The Eastern world met the Western world in a debate on discipline on Thursday in Fire Crystal’s “Parenting Styles, East vs. West”  In India, she says it is quite normal to hit to discipline children and that the elders in her country insist on the age-old tradition.  To note, Karyn @ kloppenmum from New Zealand shared some interesting points that the book, Nurture Shock, (there’s that book again!) had to say on the subject.  So, be sure to catch all the comments, on this post, too!

And, I hope writing her feelings and dilemma out in a post and getting feedback will help Fire Crystals make the right decision, as decided by her, for her family.

On  Tuesday and Thursday we heard from two new writers — Mama Robin J from Canada and Mama B from Saudi Arabia.  Mama Robin J talks about her struggle with post partum depression and Mama B writes that she wants her religion back from those who have hijacked it.  Both interviews are interesting reads!

Friday’s Question displayed amazing diversity found on the blog, when Maggie Ellison of South Carolina, USA asked, “What are your religious views and are they a part of your life?”. This is an interesting Friday Question to check out!

And, in news this week, we have two new writers joining us! One, from Brazil, Andrea, and one from Canada, Multitasking Mumma.  Welcome new moms!

This means…World Moms Blog is now writing from South America!

Tune in tomorrow when Kirsten Doyle of Canada gives us our travel itinerary for the week!

Thank you everyone for reading World Moms Blog. Have any ideas for the blog?  Please share them!  You can contact us at worldmomsblog@gmail.com

Photo credit to Photo Catcher.  This photo has a creative commons attribution license.