AUSTRALIA: The Holiday from Hell 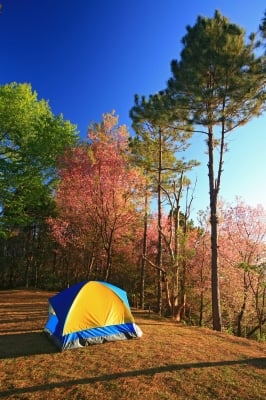 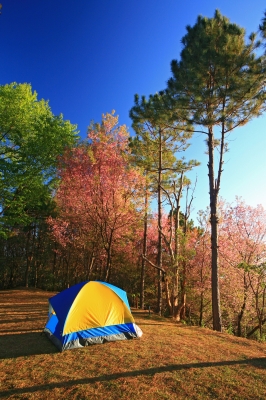 One of our favourite pastimes when our children were younger was taking them on camping trips. Camping was fun and cheap which were definite requirements for our holidays with only one wage coming into the house. We took my youngest son on his first camping trip at the age of 9 weeks; some of my friends were horrified that I would even consider taking such a young baby camping with no running water or electricity. Believe me when I say that babies are much easier than toddlers to take camping.

As is sometimes the case, one or two of these camping trips have been memorable (or should I say forgettable or maybe even regrettable).

Our most memorable (regrettable) camping trip was to Cobdogla Caravan Park, a beautiful camping place on the banks of the Murray River that we’d successfully visited in the past. Our usual camping choice was to go to the bush and get away from civilization, but on this occasion, we’d decided that because it was the middle of summer that it would be more comfortable in a campsite with power and running water.

I guess our problem this time was too many children in our group combined with extreme hot summer weather and a ‘marvelous’ new water treatment plant in the town we were staying.

Friends of ours had already set up camp when we arrived. We had our four boys, and they had their two girls. On the afternoon of the first day, our friends’ teenage daughter collapsed on the river bank from heat exhaustion. On the second day, the mother was rushed to hospital with extreme stomach pains which turned out to be gall stones.

Following a horrible start to their holiday they decided to pack up and head home. We offered to keep their younger daughter with us; no point in her missing out on a holiday because her mum and her sister weren’t well. Everyone was happy with this decision, and they left early the following morning.

The afternoon of the third day was when we discovered our biggest mistake; we should have left and gone home when they did. My one word of advice at this stage was that you should never believe anyone when they say it’s okay to drink the water, even if the camp owners are boasting about a fantastic new water treatment plant across the road.

Every time we’ve gone camping, we’ve always taken large supplies of our own drinking water.We had them this time but failed to use them, biggest mistake! Our entire group (barring my stepson who because of a specially regulated diet and monitored fluid intake was not drinking the water) came down with the worst case of gastroenteritis known to mankind that afternoon – well that’s the way it felt anyway. Most of the campers in the park also succumbed.

The illness in itself was bad enough but having five children and two adults in one campsite with it was unbearable. Then, add forty plus degree heat (104 F) and basic camping facilities to the equation. Oh yeah, what an awesome holiday it turned out to be. We ended up dragging all of our air mattresses out of the tents and putting them under the trees.

We spent the next two days on those mattresses under the shade of huge trees; I have never felt so disgustingly ill in my entire life. Hubby and I were both too sick to pack the cars or drive the three hour drive home. We’d taken two cars, so we couldn’t even take turns driving home.

It was distressing for me with my children unwell and with barely enough energy to look after myself, let alone, help them. I also had my girlfriend’s daughter who was upset and wanted her mum, as most kids do when they’re not well, which only added to my stress as I tried to comfort her, as well.

We had another friend and his son turn up to join our camping experience. They had already been on their way up when we had all fallen ill, so there had been no opportunity to phone and warn them. Instead, they spent their holiday assisting us and then helping us to re-pack the cars for the journey home. It was the single most miserable holiday I have ever experienced.

What about you, have you ever experienced the holiday from hell?

This is an original World Moms Blog post by Inspiration to Dream of Adelaide, South Australia. Fiona is the writer of Inspiration to Dream and can be found writing or reading in every spare moment that isn’t filled up with work and her three boys; and of course, with a bit of spare time thrown in for hubby, as well.

Image credit to Image: think4photop / FreeDigitalPhotos.net”>think4photop. This image has been used within the terms of use from Free Digital Photos.