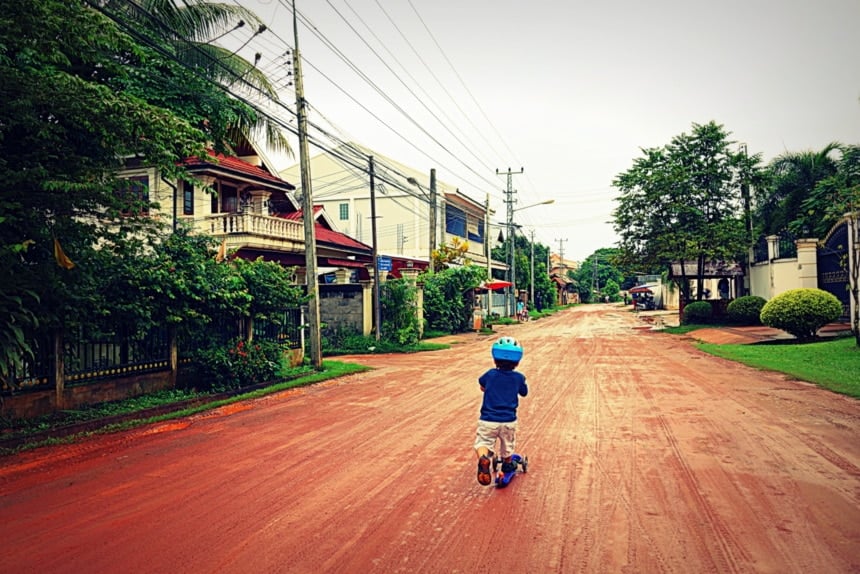 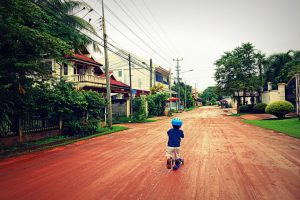 All of our concerns about the packing and the long flight didn’t compare to the emotional transition of moving a family with two 2.5-year olds across the world. Jet-lagged, fatigued, and with our world turned upside down, all four of us were unhinged. I had miscalculated our final end goal of just getting here and hadn’t foreseen how hard it was going to be for the little ones during the weeks after arrival. It broke my heart to hear our kids asking if they can go back to our Denver home now, when is their grandmother coming over and if she can’t come over can they go to her house, will their old teachers be at their new school, will their old friends be at their new school…

And it was frustrating to try and maintain our old routine of going for walks around the neighborhood when we now live on a bumpy dirt road that is muddy most of the time and the weather is so hot and humid that everybody melts after five minutes and there are mosquitoes that carry tropical diseases and stray dogs we don’t know will bite us or not. It was even more frustrating to try to introduce food that is locally available and getting demands for “Cheerios mommy!” and now we only like the really sugary yogurt since the healthier yogurt here doesn’t taste anything like the Chobani brand we loved back home.

I could go on and on about the little things but the worst of it wasn’t those little things or our sad conversations about our Denver home and DC home and now our Laos home, and all the things and people we miss.

No. The worst of it was our son throwing fits like I had never seen before and with a force that seemed demonic. The worst fit occurred in the taxi home after 1/2 day at daycare – the look in his eyes were full of hate, his strength unmatchable by mine to hold him tight, his face a sweaty purple, his bare arms and legs grew a speckled red rash, and his mouth spurted white foamy saliva – a sight that nearly made me take him straight to a doctor in case it turned into a seizure. Luckily, it didn’t. He calmed down after we got him into the house.

It’s been almost two weeks since and no more fits. We think he reached his emotional limits that day. He had been in his new school for a week, had a respite over the weekend home with us, then returned to all that newness again that Monday and found himself on a field trip to an outdoor market. The heat, the crowd, the strange new language, the smells, everything about visiting an outdoor market in the middle of a very hot day is enough to overwhelm the most stalwart of us. But for this little one, it was too much.

The move for him was too much, new house, new people, new food, new language, new school. I called it “Toddler Transition Terror” – unstoppable screaming and thrashing due to a child’s discomfort and confusion over change in climate, scenery, people, language, food, and home that occurs with an intensity level beyond the normal expected “terrible-two’s” behavior.

As a mother there was tremendous guilt for putting our kids through such a dramatic life change, by choice. It made my husband question his career and our future in this life-style. We could not see the forest through the trees during those first few weeks. All the benefits of raising kids overseas were lost on us. But as I mentioned, things are getting better. Everyone’s getting their footing. For certain we’re not yet in the clear but week by week we are transitioning. We’re able to take longer walks and even scooter along on our muddy dirt roads like we used to do back home and we are discovering new things we like to do here.

And so our adventure begins much like the road we live on, very bumpy but manageable.

Have you had major life changes that affected your children severely? What advice would you have for others about how children deal with change and trauma?

This is an original post to World Moms Blog by our mother of twins writer, Dee Harlow in Vientiane, Laos. You can always find her writing on her blog, Wanderlustress.