CANADA: Finding A Balance Between Awareness And Fear 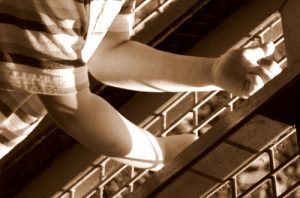 When I was a kid, the sexes in my household were nicely evened out. There was a mother and a father, a son and a daughter. Even the numerous family pets were split more or less fifty-fifty.

When I take stock of my current household, things are very different. There’s my husband and my two sons. And then there’s me, the sole representative of my gender. We don’t even have any pets to swing the balance.

I am seriously outnumbered, and my family takes great pleasure in letting me know that. “Gang up on Mommy” games feature regularly in our lives. It’s a great deal of fun, and we all get a lot of laughs out of it.

It also means that I have to live with an inordinate amount of boy humour, which, let’s face it, boys never grow out of. I live with three people who have contests to see who can fart the loudest.

These days, the evolution of boy humour is most evident in my younger son James, who is six years old. He is highly verbal, has a phenomenal imagination, and finds everything funny. He is the world’s biggest drama queen, and has hissy-fits with alarming regularity, but they never last for long. It’s so easy to make him laugh. All you  have to do is mention the word “butt”.

An unfortunate side effect of all of this is that James has started making inappropriate mention of various parts of his body. That is to say, he has been making anatomical jokes at inappropriate times, in the presence of great aunts, grandmothers, and random strangers.

I know this is a phase that boys go through, and on the face of it, there’s no real harm in it. I remember being six years old, and I remember what my six-year-old male friends were like. Let’s be frank: they were a little smutty without meaning to be. One can hardly blame them – kids that age often don’t have a clue about the meaning of what they say.

It makes me worry, though. I know it’s a phase, and I do my best to turn James’ outrageous remarks into teachable moments. But what if…?

What if James makes a joke about his penis in the presence of a questionable audience?

What if a sick pedophile uses one of James’ jokes against him?

What if he says the wrong thing to the wrong person – all the while thinking he’s just being funny – and that person ends up doing horrible things to him?

James knows, of course, that his private parts are private. He knows that it would be wrong for anyone to touch him there. He knows that he’s not allowed to talk to strangers or go anywhere without my husband and I knowing about it.

The trouble is that he knows about privacy and stranger danger in broad terms and now, being the inquisitive child that he is, he is wanting to know about specifics. He is asking just what, exactly, these strangers would do to him and why his solution of just “punching them in the nose” wouldn’t necessarily work.

I have a confession to make: in this matter, I feel a little out of my depth. I want my son to be aware of what dangers could be lurking right outside the gates of his schoolyard, but I don’t want him to go through life in a state of fear. And I am trying to figure out how to strike that balance, and what level of detail is appropriate. The generalized statements about what is and isn’t safe are no longer enough for James. But although he is looking for detailed answers, just how much detail do I go into?

I mean, he’s six. He’s only a baby. Apart from some feel-good stories about how Mommy and Daddy came together to make babies, the kid doesn’t even know what sex is. Am I really thinking about telling him that there are people out there who would want to touch his penis and force him to touch theirs? Does he need to know that sometimes, people do horrible things to little kids and then kill them?

On the one hand, I think I must be absolutely insane to even think about telling my six-year-old child about stuff like this. But on the other hand, it does happen. To kids his age and younger. Can I really help him stay safe if he doesn’t know what he’s supposed to be staying safe from?

For now, I’m sticking to the theme of, “Not all people are good, some people are bad and like hurting others”. But I suspect that the time is coming when that will not be enough. And when that time comes, I have to be prepared.

What is your approach to teaching your kids about the ugly side of life? How do you handle questions when you’re not sure that your kids are developmentally ready for the answers?