Saturday Sidebar: How and where did you meet your husband/partner? – Part 1

This week’s Saturday Sidebar Question is a spin off from Mama Kat’s writing prompts.

“How and where did you meet your husband/partner?” 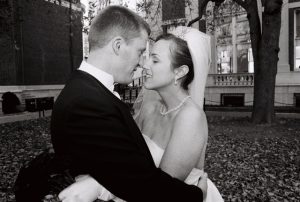 A lady in France

ALadyInFrance of France writes:
“My husband and I both came to church in NYC the same day for the first time. He was an atheist but he thought he might meet some girls. I found him to be proud and unfriendly so I kept telling people I wasn’t interested when they suggested we should go out. Three years later we finally did go out, and this October will be 12 years.”

There is more to this story. Read it here in the French lady’s site. The pictures are priceless. You should hop on there to see them.

Alison Lee of Malaysia writes:
“I first met my husband when I was dating his friend! A few months after that, I was single again, and bumped into him at a cafe we both frequent. We started hanging out a lot after that, and things just happened naturally. We’ve been together now for 8 1/2 years, and will be married 5 years in November.” 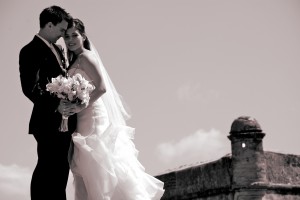 Ana Gaby@StumbleAbroad of Indonesia writes:
“We met in 2006 at a white water rafting church trip in West Virginia the weekend after I moved to Washington DC for my new job. I was new in town and I was asking the organizers the best way to get to church and this guy offered me a ride to church and gave me his card. I called him that afternoon met him at a metro stop and went to church together. After a year and a half having a long distance relationship we got married in May 2008. Four amazing years of marriage, three different countries and two beautiful boys later we’re still riding together and enjoying every bit of it.”

Hamakkomommy of Japan writes: “I met my husband when he was in the States briefly studying English at my university. (Clemson, go Tigers!) We had no interest in each other whatsoever! A few years later, I was working in Japan when a mutual friend invited me to visit Yokohama and arranged a party with the Japanese students we’d met in school, one of which was my husband. Suddenly, twelve years later we’ve been married for almost a decade and have two kids. Funny how that happens.” 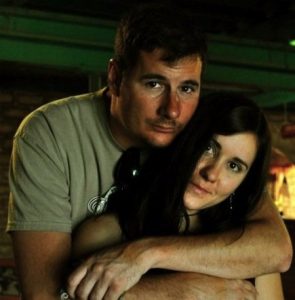 Polish Mom Photographer of California, USA writes:
“I first started talking with my husband online. He had found my profile on couchsurfing.com while looking for a place to crash while traveling. I couldn’t help him with the accommodation at that particular day but we had started sending mails to each other. At some point he got deployed to Iraq for 6 months and a week before his deployment I broke my back and was essentially stuck in bed with plenty of free time to chat with him while he was in Iraq.
When he returned from Iraq and I was free from my plastic cast we met and pretty much started to date right away. We got married several months after that.
We did not have the wedding.”

Our Mom Photographer claims she does not have wedding pictures, but this photographer has the cutest couple pictures in the universe. Check out her page if you need that, ‘Awwww!!!’ moment.

Maman Aya of New York, USA writes: “I met my husband at work when he joined the bank I was working for at the end of 1997. He sat at a desk near me wearing a pink shirt when I noticed him. We became friends, and started spending time together, almost always with friends. When I decided to take some dance lessons (for my father’s wedding) he volunteered to take them with me (on a purely platonic level), which in hindsight was such a HUGE declaration of love because he hates to dance and has 2 left feet – LOL! One evening in June when we were out with friends from work, I went to the ladies room. Somehow when I came back almost everyone had gone, except for my husband, who kissed me, quite passionately, out of the blue, and literally swept me off my feet. We started dating and I categorically denied that he was “the one” (my friends still laugh about the stupid excuses I made). It took Sept 11 (when my husband didn’t know if I had made it out of the World Trade Center for hours) for him to realize that he wanted to spend the rest of his life for me. We will be married 9 years next month (and boy do I have an amazing surprise for him – shhh don’t tell!) :)” 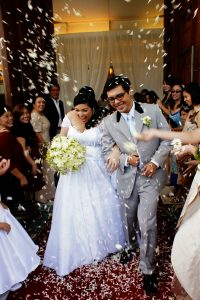 Read more about P Cuyugan’s love story here. There are some nostalgic pics out there since 1999. In fact she is celebrating this month as her first wedding anniversary month. Our first anniversary wishes to Mr. & Mrs. Cuyugan. 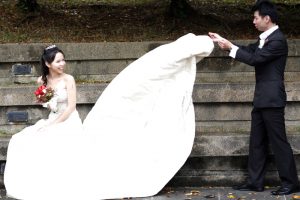 mamawearpapashirt of Singapore writes:
“My husband visited Melbourne where I was studying/working for his grad trip and a mutual friend hooked us up. It started out as a joke among his friends that he was flying all the way from Singapore to Melbourne to “pursue” me. Well, I guess you can say that the joke became reality. Before he left, he gave me a teddy bear with a long-stemmed rose, and said he would love to get to know me better. A few months down the road and a return air ticket to Singapore later, he did. ;)” 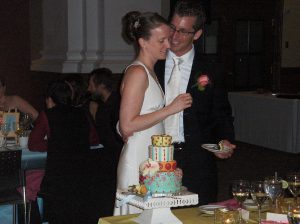 Travel Lady with Baby of Quebec, Canada writes:
“I am sure there is going to be laughter out there – my husband and I were both members to a white haired/retirement gym. We say that because it seriously was. All the 65 year old men in the neighborhood would get kicked out of their house and so they spent hours gossiping at the gym. My husband and I were the only one’s constantly in the weight area at the same time everyday. We ended up becoming friends, and ran together, then it quickly led to dating. We have been together for 10 years.”

Do you want to know more and in detail about Travel Lady’s romance? She has written in length here. It is a very funny, albeit romantic story. 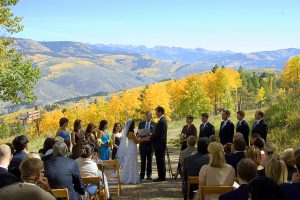 “We met in Uzbekistan as volunteers for the US Peace Corps, started dating during the first three months of training in Tashkent, then spent the next year long-distance living across the country from each other (him in Nukus, me in Andijon). Got married in his home state of Colorado soon after returning to the States. Been going around the world together ever since!”

Stay tuned for Part: 2 where more contributors chime in with their love stories.

What about you… where did you meet your man? How did it happen? We want to know all about it. Write about it in your own blog and leave the link here as a comment.

This SSQ has been compiled and edited by Purnima, India.

Photo credit to our contributors.