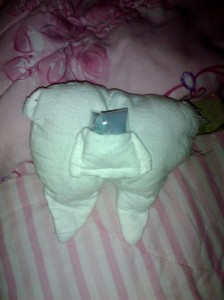 I arrived at the doorway of my daughter’s pre-school classroom to pick her up.  We made eye contact and I could see that she was very excited.  I knelt down to her level as she ran over to me and happily announced, “Mommy!  I met the tooth fairy today!”  “You met the tooth fairy?” I incredulously replied.  “Yes!  She wears glasses and wings, and a blue dress,” my daughter replied.  One of her teachers walked over smiling having overheard our conversation.  She explained that the Tooth Fairy, from the Center for Pediatric Dentistry, had in fact come to visit the children and talked to them about the importance of taking care of their teeth by brushing every day and not eating too many sugary sweets.

That was the first time my daughter had ever heard of the tooth fairy, but she quickly took to the idea and I could tell that she was already eagerly looking forward to the day she would lose her first tooth.

For readers who may not be familiar with the tooth fairy, you may ask…why?  Well, a couple of the older children in her class had already lost a tooth.  They informed her that after a tooth comes out, if she puts it under her pillow at bedtime, the tooth fairy will come while she is sleeping, take the tooth, and leave her some money in return.

Sometimes I feel guilty about perpetuating things like Santa Claus and leprechauns, but when I see how much fun it is (both for me and my girls), I quickly change my mind.  I have to admit though, on this particular day, I wasn’t ready to start thinking about another character.  I mean, the girl didn’t even have any wiggly teeth yet!

To add to this, since I was raised with Hispanic culture, my tooth fairy was a little different.  In my home, when you lost a tooth, you still put it under your pillow at bed time, and when you woke up, it was gone and money was under your pillow in its place.  But the money did not come from the tooth fairy.  It came from Ratón Pérez.  Yes, that’s right, a mouse.  I told my daughter about Ratón Pérez, but she did not believe me.  She said, “A mouse?  Really mommy?  Why would a mouse want your tooth?”  (I thought to myself…why would a fairy want your tooth?  I don’t know!)  I said, “Yes, really.  You should talk to Abuelita, she’ll tell you about Ratón Pérez.”  She did ask my mom the next time she talked to her, and my mom confirmed, that yes, he comes to take your tooth.

Well, since that day, my daughter’s best friend lost a couple of teeth.  Guess what?  The tooth fairy came.  She left the best friend four quarters.  “I wish I would lose a tooth,” my daughter added when she was done telling me about this.  “Your baby teeth will start to come out when your adult teeth are ready to grow in.  You just have to be patient.  Don’t grow up too fast on me!” I told her.

My daughter started Kindergarten last fall, and some of her classmates lost their first teeth.  “When am I going to lose a tooth?” she would ask me each time a different classmate would report a visit from the tooth fairy.  “I don’t think your baby teeth are ready to come out yet sweetie,” I would tell her.  She would look in the mirror and check each tooth individually to see if any felt wiggly.

One day my daughter came home from her after-school sewing class and pulled out a tooth shaped white pillow with a little pocket in the front from her backpack.  She 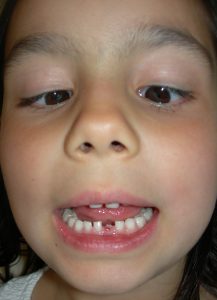 proudly explained that the pocket was meant to hold the tooth in place until the tooth fairy came to take it.  Then she put it in her dresser and said, “I’m saving it right here so I know exactly where to find it when my teeth start falling out.”

At her dental check-up this past spring, she showed the dentist two teeth she thought were loose.  She also reported that she thought they might come out soon because lots of her friends had already lost their teeth.  The dentist smiled and acknowledged that they were in fact slightly wiggly, but that she should not get too excited because it could still be a few months before they would come out.

Well, she had to wait about three more months.  Earlier this summer (right before her 6th birthday) when I picked her up at summer camp one day, she ran over with a big grin on her face.  She said, “Guess what?!”  I said, “What?” and she pulled out a Ziploc bag with one tiny white tooth in it.  Then she opened up her mouth and pointed at her gum.  I gave her a big hug and said “Congratulations!”  She was beaming.  She said it happened while they were having a morning meeting.  She was playing with it, and all of a sudden it popped out.  She said everyone gathered around her to look at it and some kids even told her she was “lucky”.

That night, she put the tooth in the pocket of her tooth shaped pillow.  When I tucked her in I said, “It will be interesting to see who comes to take your tooth tonight.”  She said, “What do you mean?”  I said, “Well, you think it’s the Tooth Fairy, but I think it might be Ratón Pérez.”  She said, “Okay mommy, we’ll see.”  The next morning she woke up to find a dollar bill in the pocket of the tooth pillow.  She also found a book tucked under the tooth pillow.  The book is titled “The Tooth Fairy Meets El Ratón Pérez” and the inside cover was signed by the Tooth Fairy AND Ratón Pérez congratulating her for doing such a great job brushing and encouraging her keep up the good work.

What’s your tradition for dealing with lost teeth?  Is this typical in your country or particular to your family?

This is an original post for World Moms Blog by Eva Fannon.  Eva can be found on Twitter @evafannon.