Saturday Sidebar: “How did you feel when you held your baby for the first time?”

“How did you feel when you held your baby for the first time? Share with us your birth story.” 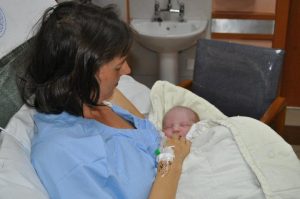 Mama Mzungu from Kenya with her baby

MamaMzunga of Kenya writes: “My first emotion when I saw my second son for the first time was “it’s about time!!” We had our second child in Nairobi in a modern hospital. It was fully equipped for an emergency and the doctors were a bit more used to working with foreigners, which clinched our decision to have him in the capital city instead of where we were living in Western Kenya. But the experience was very much like how birthing must have been in the US 40 years ago. My husband was not allowed in the room with me and in fact I saw very few men in the labor ward at all. Laboring women were literally leaning on one another for support in a kind of sisterhood that I almost envied. I ended up with a c-section, and by the time I was fully lucid, I was back in the room with my husband waiting anxiously for someone to bring the baby. We waited. And waited. And waited. FOUR excruciating hours later we got to hold him. He cooed sweetly, breast fed like a champ and seemed oblivious to all our pre-existing panic, which washed away as soon as we saw his beautiful little face. You can read more about this only funny in retrospect experience here.”

Alison Lee of Malaysia writes:
“I blogged the birth story of my second son here.”

Carol @ If By Yes of British Columbia, Canada writes:
“My little Owl was born after 52 hours of contractions. They induced me because I was overdue (when he was born his skin was peeling off from being in the womb so long) but it still took two and a half days for him to be born. The whole thing felt very unreal, and when he was born I didn’t connect with him instantly. I cared about him and wanted to hold him, but it wasn’t instant love. It was just like “Oh, a baby! And I get to keep him, you say?” My husband, on the other hand, fell head over heels for him right away and was near tears gazing at him. I had been half expecting to somehow recognize him, but he came out with big eyes and a face I had never seen before, so it took me time to get to know him and feel familiar with him.

The love grew gradually with time as I got to know him and he began to feel like mine. The weirdest part was trying to get him to nurse. It was like, “Hi, I just met you, and this sounds crazy, but here’s my breast, so suck it, maybe?”” The link to her birth story is here.

“When my own mother passed away I was seven months pregnant with my fist child. I was so close with my mother that I was sure I would feel her presence somehow in some magical way even after she was gone. I was surprised not to sense her anywhere. It sounds silly saying it now but when my daughter was born three months later I half expected to find my mothers’ spirit in her. It was an easy birth and she cried just long enough to catch her breath, and then stopped crying and blinked as she looked around the room taking it all in. She looked nothing like my husband or I and was a unique individual from the start. I did not find my own mother in that moment, but I became a mother, and felt amazed by my tiny individual.”

Hamakkomommy of Japan writes:
“After a very long labor with my first, I was able to hold my son a few seconds after birth for some “kangaroo care.” (Skin to skin contact between newborn and mom.) He promptly pooped on my chest.” More of the birth story is available here.”

Jacki of Paris, France writes:
“I had a difficult labor and when my son finally made his appearance, I felt relief and happiness, quickly followed by a giggle. The first words I said to him was “Oh hello my little conehead.” His head was so misshapen from being stuck for so long. =) I recently blogged about our birth story here.”

Karyn Van Der Zwet of New Zealand writes:
“My initial and very unromantic reaction to seeing our eldest son was: OMG, he’s so small! (he was 5lbs 12oz) I had never held a newborn baby before let alone one that little. I was too scared to dress him, incase I broke him, for the first week – I made Craig do it all!”

Kirsten Doyle of Ontario, Canada writes:
Kirsten has no words to describe it, she says. Read more about her story here.

Lady E of Indonesia writes …
… about her emotions here.

Mrs. P Cuyugan of Philippines writes:
“When I gave birth, my doctors were my dad and my uncle. They saw the baby before I did, and they were swooning like anything. When they finally put him in my arms, I knew right away what all the fuss was about. He looked just like I did when I was a baby! It was love at first sight. The first thing I said to him was – You look just like me!”

Some of our fans and readers dropped in with their birth stories too. Check them out!

Janice Lim shared her birth story with us here.

Rusti Smith Sidel shared both her children’s birth stories. The first one is here and the second one here.

Samantha Catabas Manuel says time stood still when she held her newborn son in her arms. More about her story is here.

Carrie Lee Ferguson asks why was it hard to believe that she was birthing her daughter? She writes about it interestingly here.

What about you… How did you feel when you held your baby for the first time? Tell us your birth story!

This SSQ has been compiled and edited by our World Mom, Purnima from India.