We are in Ethiopia this week, virtually following along with the ONEMoms team as they traverse the country gathering material to share with the world.  “ONE.org is a non-partisan advocacy organization dedicated to the fight against extreme poverty and preventable disease, particularly in Africa. Backed by more than 3 million members, ONE .org works with government leaders to support proven and cost efficient solutions to save lives and help build sustainable futures.”-ONE.org 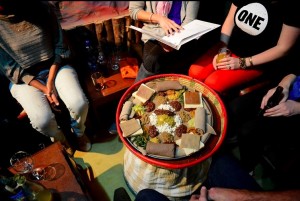 World Moms Blog is excited recently to have become a community partner of ONEMoms and we’d like to bring you along as we  follow their trip of 12 ONE Moms traveling through Ethiopia from October 6th through October 13th.

The diverse group of ONEMoms includes a  Supermodel/Activist, a Book Publisher, a Pig Farmer, Mom Bloggers, Food Writers, a Lawyer, a Scientist and a designer.  Their goal is to meet up with Ethiopian women, agriculturalists and health care workers, and in doing so engage us in a global dialog on the important issues faced in Ethiopia.

Ethiopia is a fascinating country, and the only country in Africa that was never colonized.  The Italian government’s long ago attempt to do so apparently left hints of Italian influence behind.  It is the most populous land locked country in the world, and home to over 80 languages.

Ethiopia’s breathtaking landscape has a diverse ecology and terrain with deserts on the eastern border, and tropical forests to the south.  It is one of the Founding members of the U.N., and the African Union Headquarters are based in Ethiopia’s capital of Addis Ababa.  Culinary history suggests that its unique cuisine has been around for millennia, agriculture produced by mostly small-scale farmers makes up the greatest portion of the economy,  and it is the largest coffee producer in Africa. The ONEMoms itinerary will encompass a variety of economic, health and agricultural issues such as a visit to the FashionABLE factory, which is dedicated to creating a sustainable business for women in Ethiopia. As a not-profit company FashionABLE provides training and education as well as jobs, so that instead of being dependent on charity, the women can become a vital part of the developing economy. They will go to a  Fistula Hospital where women are treated for Obstetric Fistula, one of the most devastating of all childbirth injuries, with a 90% success rate of a cure.  They will travel to villages outside of the city to meet with Women Farmers to discuss agriculture, and visit the sites of nutrition programs, and educational resources.

Please travel along with us and the ONEMoms.   You can do so by tweeting or posting questions  you may have for women and families in Ethiopia.   ONEMoms will share your questions and comments and report back via SoundCloud, Twitter, Instagram, Pinterest, Facebook, ONE Moms blogand the members individual blogs listed below. You can also become a ONE Mom #ONEMoms to add your voice to ours.

YOU CAN JOIN  ONE MOMS HERE,  and follow the ONEMoms on the trip with the below information.

This is an original post to World Moms Blog by our Social Gods columnist, Elizabeth Atalay.

The images used in this post are used with permission from ONEMoms.