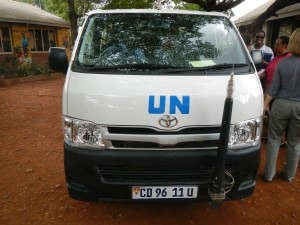 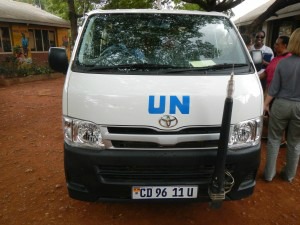 For example, the creation of the U-report program. Mr. Sapra explained that the theme of the program is “voice matters.” He envisioned the importance and possibility of connecting more Ugandans with their country and the needs of the people. The U-Report program allows UNICEF to poll individuals on important matters, such as health and education. There are over 150,000 Ugandans signed up, and they receive a text on their phones twice a week regarding the current question. The poll is then published in the newspapers and the members of parliament also respond there to the poll results. The issues are also discussed on TV. People from anywhere in the country can have a say or a “vote” in the way their country is moving forward, and the government is gaining a better understanding of the needs of its people. 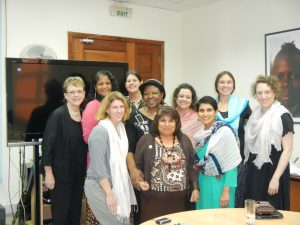 Shot@Life Delegation with Ms. May Anyabolu, the UNICEF Deputy Representative to Uganda in Kampala.

Dr. Sapra gave the example of a government stipend for young people to open their own businesses.  The young people were complaining that there was no money to do this, and the government was complaining that no one was applying for the stipend program.  U-Report uncovered the barrier.  In order to receive the stipend, the students needed to have completed their O-Level (equivalent of a high school degree).

The students argued that if they had the O-Level they wouldn’t need the money because they could find a job, but it was the children who had not yet completed that needed to take advantage of the stipend. Within a short matter of time, the O-Level requirement on the stipend was removed by the government, and the program began working as originally planned. The U-Report program is not only engaging Ugandans, but helping their government to better serve them.

This program is just one of the 4 major innovations that UNICEF has initiated in Uganda. The first is that more vocational skills must be taught in school earlier. Upon completion of 11 years of schooling, it is then too late to teach vocational skills if the children do not have the means to continue their education after they graduate. The service sector is opening up, and the graduates are not geared for these jobs.

The second point is that only 65% of the teachers in Uganda cannot read a paragraph in English, which is the medium for teaching.  I had to ask Dr. Sapra to repeat that one because I couldn’t believe it.

To help provide a better education for students who do not access to good teachers, UNICEF has taken the list of the best teachers in Uganda and is creating virtual lectures. The recorded lectures will be available for students throughout the country in village youth centers, where rugged computers built up by UNICEF will be housed.

The last program is to bring the healthcare to the people, instead of inviting people to the healthcare. Ninety percent of Ugandans attend a church or mosque.  UNICEF is working with places of worship to bring needed healthcare services to the people who need them. Our delegation will be visiting 3 such places over the next few days, and I can’t wait to report back.

Dr. Sapra also told us that in July UNICEF will be linking up several programs in one: birth registration, anti natal (prenatal) checkups, HIV tests for mother and child, nutritional checks and immunization. He explained how it is difficult to fully serve the communities they go to because there has been no census in 10 years. For a population that is 70% less than 30 years and has a birth statistic of 1.5 million new babies per year, their job is challenging.

From my experience in hearing Dr. Sapra’s briefing and listening to his responses to our many questions, I was inspired that Uganda had such a rock star in charge in their UNICEF office.But what a team, because May Anyabolu, the UNICEF Deputy Representative for Uganda, is the next in command, and she equally knocked my socks off.

May kept saying that she could “feel” things to get a sense of how in tune she is with what people are thinking and feeling. The love and the need to help children was evident in her voice. She explained UNICEF’s focus on newborn and maternal health: the aim is to reduce neonatal mortality and change the behavior of pregnant women. Their plans aim to get pregnant women to have adequate anti natal care 4 times and to encourage them to birth in a health center.  Currently, about half of Ugandan births are at home.

May explained the importance of having a horizontal program. She explained that the health and safety of a child cannot be carried out by doing only one thing, there must be horizontal integration. Malnutrition, immunization and clean water must also be added to the equation when seeing the child in total, she explained.

Later this day, we also had a working meeting with more UNICEF representatives who went into more depth about the programs that Dr. Sharad and May had introduced us to. Dr. Modibo Kassogue said that the common theme was that Uganda is unique because of the innovativeness of these programs.

When it came to immunization, Dr. Eva Kabwongera, a health specialist, explained that after not reporting a case of polio in Uganda for over 15 years, new polio outbreaks had been reported in 2009 and 2010 because of immigration from neighboring countries who were not properly vaccinating.

We also had the pleasure of hearing from the Ugandan Minister of Health who explained the importance of the government and UNICEF working together and also working with other non governmental organizations to continue to try to reach Millennium Development Goals which haven’t yet been met in Uganda.

In the afternoon, we went to the Railway Children Primary School in Kampala.  It was one spectacular afternoon. Stay tuned to learn more about our visit there!