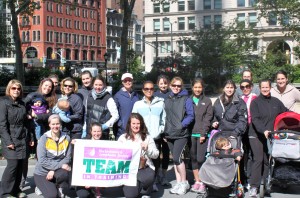 “I think I am going to run a 10K”  I told my husband over dinner one night.  He looked at me like I had two heads.  “If you told me that you were going to swim or cycle, I wouldn’t be surprised – but running is not your thing”.

It’s so true!  It’s not my “thing”.  In fact I hate running, but I received an email from Apple Seeds, an amazing indoor playground offering tons of classes for kids and moms in New York City, Mumbai and Dubai, telling me all about this Moms In Training group.  A group of moms, who train together for 8 weeks leading up to the race day, a women’s run around Central Park on June 8th.  So, I decided to look into it… and it sounded AMAZING!

One year ago a pair of moms, Helena and Kristen, started this program.  It is part of the Team in Training program that helps teams train for races to raise funds for the Leukemia & Lymphoma Society.  The weekly training sessions are led by certified trainers (the Madison Square Park group is led by Meri Treitler, founder of Mommy & Me Fitness). Here’s what you get: END_OF_DOCUMENT_TOKEN_TO_BE_REPLACED