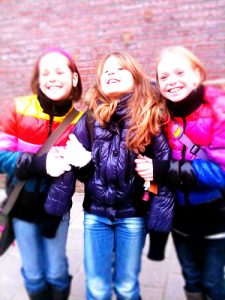 Girls have lost four years of their childhood.   The pressures we dealt with at 18, they are now battling with at 14.  The trouble being that 14 year old girls are not equipped with the emotional tools to deal with these types of problems. Girls are trying to look together, but really they are struggling.

There are two main factors contributing to the decline in girls’ mental health.  The first is that we are living in a society that is predatory towards children.  The pre-teen market is worth billions of dollars and did not exist 15 years ago.  It creates huge anxiety for an 8 year old girl who now wonders, “Am I cool enough? Do I fit in? Do I have the right type of clothes?”

The alcohol industry also views teenage girls as a major market for making money.  As girls often don’t like the taste of alcohol, the industry devised alcopops which disguise the taste and thereby encourage under-age drinking. Teenagers do not have fully grown kidneys and cannot process the alcohol from their bloodstreams as fast as adults.  Alcohol causes serious harm to girls’ growing brains not to mention the huge risks to safety from accidents and violence.  Binge drinking has increased enormously in all parts of the world. Teenagers that binge drink are 60 per cent more likely to have alcohol problems as adults.

The second factor is that girls spend only a fifth of the time with older women than they spent 50 years ago.  When girls are 14 they don’t want to be like their mothers and often feel the need to separate from them.   If they don’t have older women to talk to for guidance they will rely on their peer group who are as lost as they are.

So what are Steve’s recommendations to help improve girls’ security and self-esteem?

One important step could be to get rid of TV in the lives of young children.   Steve believes TV is like a third parent to children and the messages portrayed in TV and advertising are hugely damaging.  TV tells you that your looks are the most important thing about you, your body is never good enough and that the answer to life’s problems is to buy something.  If you want to sell products to a girl, whether she is four or 14, you first have to make her insecure – about her looks, friends, clothes, weight, skin and hair.  TV also teaches that sex is a currency and it is normal to have sex with people you don’t know or even like.  At the very least, children should not have TVs in their bedrooms and TV viewing should be heavily monitored by parents.  When the TV is on the whole time, no one has a focused conversation.

A second idea is to encourage a child’s spark.  This is an interest, enthusiasm, talent or concern – which, if it is supported, gives a child incredible joy, motivation and direction.  Children with sparks do better at school and are happier and more confident.

Thirdly, Steve feels that aunties may be the secret to helping girls and that every girl needs a special auntie in her life.  These could be sisters of her Dad or Mum plus adult friends of her Mum or family.  Aunties talk sense to girls.  They know about men and are straight talking and are not afraid to criticize.   Proactive aunties can literally save lives.  Steve encourages all aunties to be more involved with their nieces by taking them for a regular coffee and asking them about their life and dreams or offering help with challenges.

Do you see some of these same issues coming with with your daughters or young relatives?  Have you tried any of Steve’s solutions? What’s working for you?

This post is a guest post from Hannah Ashton of the United Kingdom. Hannah is the mom to a young baby, a girl, and a longtime fan of World Moms Blog!

Photo credit to Jolante. This photo has a creative commons attribution license.