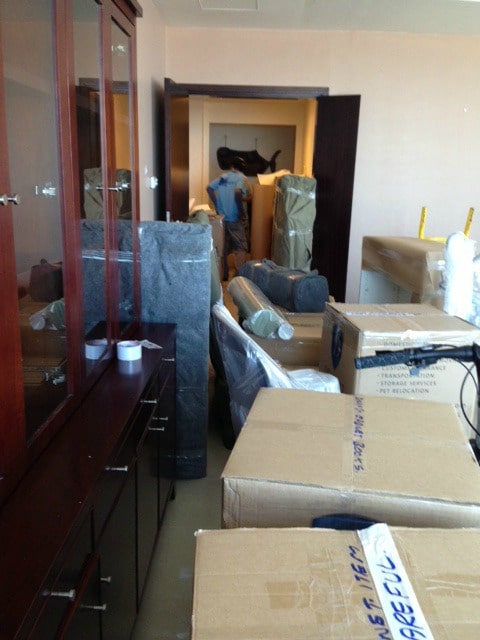 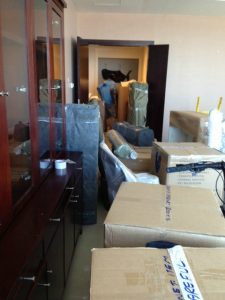 Decades ago, as I moved around Manhattan from cheap apartment to cheap apartment, most of my stuff fit into “New York luggage:” big black Hefty garbage bags.  Now that I’ve acquired children, however, and all their junk precious possessions, the New York luggage has been retired.  Now I have to hire professionals, like the team of four guys who hauled our furniture and approximately eighty gazillion boxes into long-term storage when we moved from New York to Abu Dhabi two years ago.  It took us more than three days to finish that move—I’m sure those movers still have a dart board with our apartment number at its center.

That move almost killed me—and I’m not even including the hours we spent packing and re-packing the twelve suitcases we were lugging to Abu Dhabi, in a desperate attempt to make sure that no one suitcase went over the weight limit for checked bags.

So after that move, moving from one neighborhood in Abu Dhabi to another was a piece of cake: on moving day, a squad of ten men showed up armed with huge rolls of bubble wrap and cardboard; they fanned out across our apartment and hey presto!  the contents of our apartment vanished in a few days.

When we moved from New York, I don’t remember thinking much about the difference between my life and the lives of the men putting our boxes in the truck.  At the risk of generalizing, I assumed that I had more education than they did, and that my children probably went to “better” public schools than theirs did (if even they had kids).  I mean, I know I’m generalizing here—and maybe the movers were PhD candidates in philosophy out to make an extra buck, but that seems like a stretch.

But during this Abu Dhabi move, I couldn’t stop wondering about the movers’ lives compared to mine. After all, in some ways, we are all “expats,” although in Abu Dhabi “expat” tends to refer to white-collar workers and professionals, while “worker” or “laborer” refers to people who work in the shops or do unskilled manual work.  What did they think, these men who are so far from home, as they schlepped in the boxes of my kids’ toys, the cartons of clothes, the boxes and boxes of books (when two literature professors marry, they may or may not have children, but they will breed enough books to open a bookstore). In their home countries—places like Sri Lanka, Goa, Kerala—these unskilled workers might only make about 200 dirhams a month (about 50USD), so they come here, where they might make a whopping 1000dh (about 200USD), most of which gets sent home.

Who knows: maybe the man hauling boxes up the stairs is paying for his daughter in Kerala to go to school, live in a house with indoor plumbing, get regular vitamins and checkups—all privileges that my children have and don’t see.

The next day, as I sat with the kids at breakfast (paper plates and toaster waffles, the post-move breakfast of champions), Caleb said “I feel sorry for those movers because that’s all they do all day is move stuff around,” and his older brother said “They have hard lives.”

I had to think for a minute before I responded to what they said. Because on the one hand, yes: moving heavy furniture all day long is thankless work, especially when the thermostat reads 115F.  But on the other hand, these men don’t need or want pity. On the third hand, there’s the fact that life here for these workers is in many ways better than it would be elsewhere (although, of course, many migrant workers are not treated well)—and their work here is almost certainly making life better for their families back home. And then, on the fourth hand, how to explain over toaster waffles and OJ the inequities of global capitalism and an economic system that renders it impossible for people to live humanely in their native countries?

I didn’t have enough hands to explain, so I went for the easy answer: something about how working here allowed the men to help their families back home, wherever “home” might be.  Global economics would have to wait until dinner.  But perhaps the message sank in: all week, without a word of protest, both boys have been helping unpack boxes, cart cardboard out to the street, sweep up packing dust., organize their rooms. It’s as if each kid also unpacked a little box of perspective that’s helped each boy be more aware of his own relative privilege.

Of course by last night they were squabbling over whose turn it was to choose the game on the wii, so perhaps they only found a very very small box of perspective.  We’ll see.

Question: How do you help your children think about class, wealth, and privilege, without dipping into the easy response of “pitying the poor people?”