Too Loud: Part I 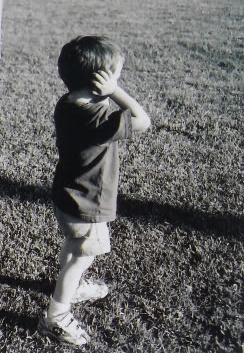 The first time we heard someone refer to my son as having special needs, it hit us like a train.  I didn’t see it at first, although I was jumping through all kinds of hoops to keep him content.  I was “on” all the time.  I parented him and took care of his needs.  He was my first child, and I didn’t realize that certain things were not typical.  He met all his milestones early or on time.  His language concerned me a bit, but then he put those 2 words together just in time for the check-up, so I wasn’t worried.

He was very sensitive to noises, but the pediatrician told me he would grow out of it.  Lots of kids and people don’t like loud noises.  In fact, I hated loud noises as a kid, too.  My son was also a very picky eater, but once again, I thought of a lot of kids who were picky eaters.  At times, he had so much energy, it was hard to calm him down.

I had a few people talk to me about occupational therapy and how much their child liked it and benefited from it.  I would think to myself, “Are they suggesting we need this, or am I reading too much into what they are saying?”  I would also hear how I never took a break.  I never got to sit down.  I thought, “Of course not.  Parenting is hard, especially when you want to be a good parent.  All kids keep their parent’s busy, right?”

I would always buffer my son from other’s comments who just didn’t understand him.  I knew my little boy had a heart of gold and was so smart, yet not everyone got to see the person I knew he was.  That was hard.

When he was 2-years-old, I did call an occupational therapist office and for various reasons, the lady and I went over a checklist of behaviors over the phone, instead of me actually going down there.  From our conversation, he didn’t fit the need to be evaluated.  Of course, I wondered if I represented him correctly.   Was I one of those parents who was in denial?  I didn’t want to be in denial.  I knew he could be hard to handle at times, but he was a boy.  Boys were difficult, right?

One afternoon, my 2 children and I went to a firehouse tour with our playgroup.  My son was fine while we were inside, but once we got next to the fire trucks, he got very upset, was yelling and wouldn’t take his hands off his ears.  The sirens were not on, and the firefighters and I assured my son that they would not turn them on.  There was nothing that anyone could say to get him to stop crying or to believe us that it was quiet.  My daughter was happy to be playing on the truck with the other kids, but I had to get her down and take them both inside.

At the time, I was feeling a mix of emotions.  My son loved trucks, and we had been looking forward to this for so long.  I wanted him to enjoy it, so there was a part of me that felt disappointed that he was so upset.  I also looked around and saw my daughter and all the other kids having fun as they played on the truck.  My son couldn’t do that.

Some of the other parents were looking at me funny, too.  That didn’t help.  Was he really going to grow out of this, like the pediatrician said?  As we drove home, we focused on the positives — about how great the firehouse was and how brave he was to go by the truck.  Inside, I was a wreck.  Could he be autistic?  Could he have sensory issues?  Is it something else?  Am I overreacting?  What does this mean for him?

A few weeks later, we went to a festival downtown.  Everything was great until a group of motorcycles passed us, and my son flipped out.  He cried, shook with fear and covered his ears.  We went back to the car, while he held his ears the entire time.

As we walked through the crowds, I looked around and saw 2 things.  No one else had their ears covered.  Not one person.  The other thing I saw was how people looked at my son.  They did that triple glance, as if they were trying to figure out what was wrong with him.  That was rough and that was when it sank in that something wasn’t right.

He wouldn’t just grow out of this.

I held my son and told him we were leaving, and everything would be okay.  I took a deep breath, held my head high and stared right back into the eyes of the people who were staring at my son as if he was a freak.  Their audacity and lack of compassion made me angry and sad.  I wasn’t going to let those people get to my son or me, but I also thought about my son’s future.  Was this something he would have to deal with all his life?  I thought of my sweet, loving, smart boy and wondered if the world would ever know him.

In private, at home, I cried my eyes out.  I tried to explain to my husband what happened.  There is no way to explain the hurt.  It wasn’t just the people.  It was facing the reality that something wasn’t right with our son.  Not knowing for sure what was going on, I didn’t know what he would face in his life or have to overcome.   I cried for him and the person I knew him to be.  I cried because I wasn’t sure if some disorder was going to take my son away.  I cried for the unknown, and my heart broke more than I thought possible.

to be continued next Saturday…

This is part I of III of an original World Moms Blog post by Maggie Ellison.  Maggie Ellison can be found crafting at home or playing at the beach with her children in the low country of South Carolina, USA.

Photo credit to http://media.photobucket.com/image/too%20loud/mbowman7/Misc%20Family%20and%20Friends/TrainstooLoud.jpg?o=275.  This picture has been cropped within the terms of photobucket.