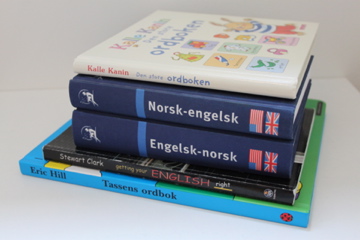 Now that my son is 15 months old, we frequently get asked about what words he knows. Everybody used to asked about his walking before he met that milestone. Strange, isn’t it?  For a period of time, the only thing people were interested in was whether he was walking, or not, by saying, “Oh no. Isn’t he walking yet?”.  But now, nobody asks that anymore. Now people are worried about his talking!

Speaking will come naturally, they say, but sometimes it doesn’t feel all that natural. For instance, his father will read him a book about animals and make the animal sound for a pig, “oink.” The next night I will read the same book, but then the pig says “nøff”, which is the sound the pig makes in Norwegian. How annoying must that be for him? And, we do it all the time without really thinking about how confusing it must be for the wee lad.

It is just very difficult to be consistent. Sometimes his father and I speak English together (well, most of the time, actually), and when I am alone with the wee lad, I speak Norwegian to him.

It doesn’t really come natural to me to speak to my son in English.

We have the same “challenge” at the dinner table. I will point at food and use the Norwegian word, and his Daddy will use the English word two minutes later. For instance, I tell him to eat his “potet”, while his Daddy says “potato”.

When referring to myself, I use the Norwegian word “Mamma”, different from the British English word, “Mummy.” As I mostly speak Norwegian to him, this is quite natural. My husband would like to be called “Daddy”, and  I am still trying to remember to say “Daddy” and not “Pappa” when speaking Norwegian. I find this very difficult!

So, he has now started to say both, “Pappa” and “Daddy”, in reference to my husband, but I am still waiting for the “Mamma” (I would even settle for a “Mummy” 😉 )

We have childrens books in both languages, we even have English and Norwegian copies of some of the books. One of my (I mean his) favourites at the moment is “Baby Owl” – he is just the cutest! In Norwegian he is called “Lille Ugle”, and in English “Baby Owl” – yet another way to confuse our wee lad!

As we live in Norway, we expect that our son will probably learn Norwegian first because it is the language that is spoken everywhere, and it is, of course, on the radio and the telly a lot. However, English is prevalent in Norway, as well. Children, here, will start to learn English in school from around the age of 6 (in my day we didn’t start until the age of 9). So, in a way, he isn’t really learning anything more than what is the norm for all Norwegian children, which is why I feel he should start to concentrate on a third language, as well.

Oh dear, listen to me. I sound like one of those horrible pushy mothers who would like their children to be good at something they are not good at themselves!

I would love to speak French or Spanish myself (it is not too late, I hear you say, but I think it is). I don’t have the patience to learn Spanish. I tried on a holiday once, but the grammar was just too confusing for me. (And, I thought German was bad!) And, French is just not going to happen because there is no way I can pronounce those sounds! Anyway, enough about me…

In Norway most television programs and films are not dubbed, which means that we get to hear the original language and read subtitles in Norwegian. I think this is great, as it does make it easier to learn, but I have just discovered that childrens films are dubbed!

Since they can’t read subtitles yet, the characters need to talk in Norwegian! So, in addition to books in English, we will also get him some English DVDs, and I will probably make him watch Dora (in English), so that he can start to pick up a little Spanish as well!  Poor lad, he will probably be sick of languages when he gets older!

In the meantime, he will learn both, Norwegian and English, as all children in Norway do. But, hopefully it will be a little bit easier for him, having an English dad.

What our your thoughts and/or experiences in raising bilingual children?

The photograph for this post is attributed to the author.