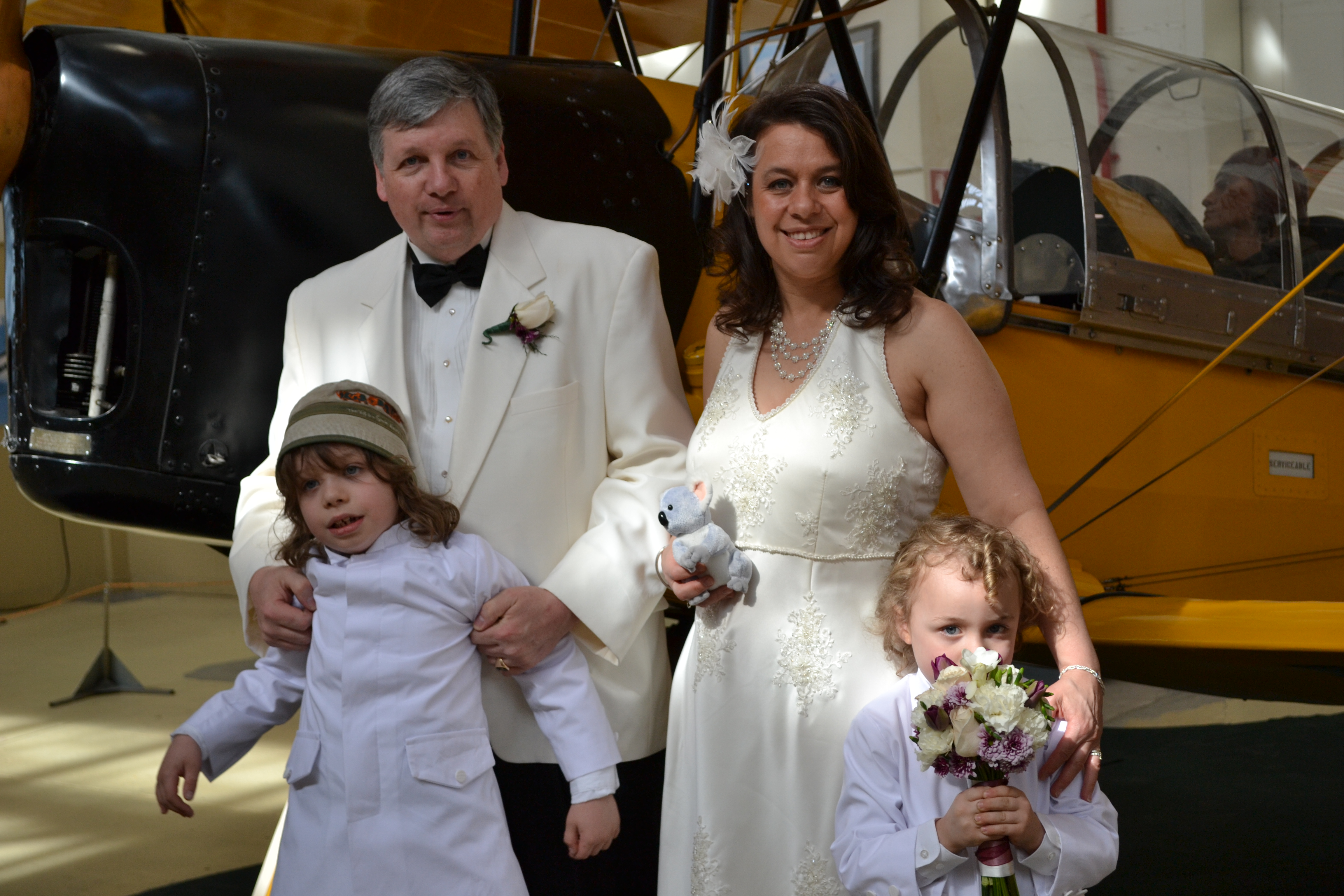 I did it! After ten years of living in sin, the births of two children, and a seventeen-month engagement, I succeeded in walking down the aisle without tripping over my wedding dress (a dress that was made by my mother-in-law and was wayyyyy prettier than the one that English chick wore when she married that prince dude).

The week leading up to my wedding day was pure chaos. I had a never-ending list of last-minute details to take care of, and these weird little crises kept popping up where I least expected. I suspect that I spent most of that last week looking wild-eyed with panic with my hair sticking up in tufts, where I kept grabbing it to rip it out of my head.

With everything that was going on – the last-minute ordering of flowers, the finalizing of seating charts and printing of place cards, the wrapping up of guest favours, the steady influx of out-of-town guests – my biggest concern was for my children. How were they going to cope with this big day?

How would they deal with wearing fancy, unfamiliar clothing, being blocked from access to me because I couldn’t let my hair get messed up, being surrounded by hordes of people for the entire day, and having to be quiet and sit still in a church?

I didn’t honestly care if they screamed the place down. My bigger concern was simply whether they would be OK, or whether they would end up stressed to the gills and unhappy. And so, a lot of my energy in the last week went into child-related planning. We hired a respite worker to take charge of George, and we had the boys doing trial runs in their new suits. We contingency planned until the cows came home.

After a week of dreadful weather that made my hair go frizzy, my wedding day dawned bright and sunny. The hairdresser de-frizzed my hair, and I managed to get ready without me or my children having nervous breakdowns. Before I knew it, it was showtime!

My two boys, the proud ringbearers, walked down the aisle calmly and quietly, as if they’d been doing this all their lives. During the ceremony, they behaved like angels. There was no screaming, no running around, no getting upset. Everyone was happy. The ceremony was perfect.

In keeping with our Casablanca theme, we had pictures taken in front of old planes at the Aviation Museum. There, the kids ran wild a little bit, but our trusty respite worker kept things under control. James snuck a kiss from the flower girl; George developed a crush on the respite worker.

At the reception, everything went swimmingly. Far from being bored and stressed out, the kids had a great big dance floor to run around on. When the Master of Ceremonies introduced them, they stood on their chairs and waved grandly as if they were celebrities.

During the meal, they ate. During the speeches, they sat quietly, prompting me to whisper to my maid of honour, “Who are these angelic children and what have they done with my kids?” During the dancing, they danced. They partied until well after ten thirty, when the respite worker packed them up and took them home.

For the entire day, from start to finish, they had been perfect – well-behaved, and above all, happy.

The following day, I was able to reflect on my wedding and say that it was perfect. All of the plans had come together. The weather had cooperated, clearing up on the one day that really mattered. Our guests had a great time.

And most important of all, I had married my soul mate, the love of my life, in the presence of our children. I honestly don’t think the day would have been as perfect, as complete, if my boys had not been there to be a part of it all.

Have you ever worried about whether your kids would cope with something, only to have it turn out fantastically well? Do you have memories of any extra-special events that just wouldn’t have been the same if your children hadn’t been there?

This is an original post for World Moms Blog by Kirsten Doyle (note the last name change from Jessiman!) of Toronto, Canada.  Kirsten can also be found on her blog, Running for Autism.