I live in Belleville, Ontario, Canada, a farming/manufacturing city of roughly 34,000 people. I did not grow up here but very close; half an hour away in a tiny town called Tweed with a population of 1,800 people. Everyone knew who I was growing up, not only because of the size of the town, but because my father was the manager of the liquor store (popular man). END_OF_DOCUMENT_TOKEN_TO_BE_REPLACED

NORWAY: Does Anyone Have the Original Soundtrack to Noah’s Ark? 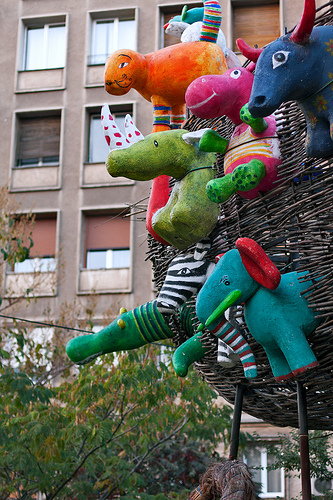 Have you ever thought about what Noah’s Ark might have sounded like? A pair of all the animals in the world in one big boat would have been loud! If you crept into the eating quarters, would you have seen Mr. and Mrs. Duck talking to Monsieur et Madame Chien over a cup of tea? “Quack, quack.” “Ouaf, ouaf.” “Slurp, slurp?”

Well, we don’t live in a boat, and our animals are mostly in 2-D, but you can hear some pretty international animal sounds blaring from our windows lately.

I am French, and my husband’s Norwegian, and we both talk English to each other. Therefore, there are three strong languages, our mother tongues plus English, under our one roof. END_OF_DOCUMENT_TOKEN_TO_BE_REPLACED