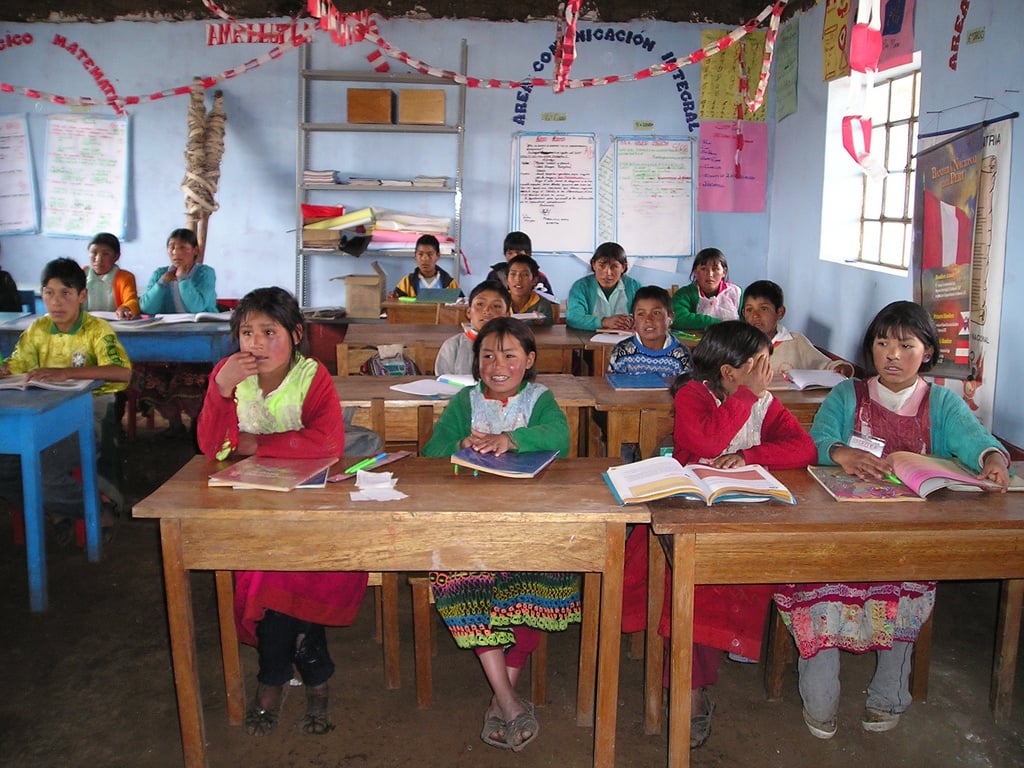 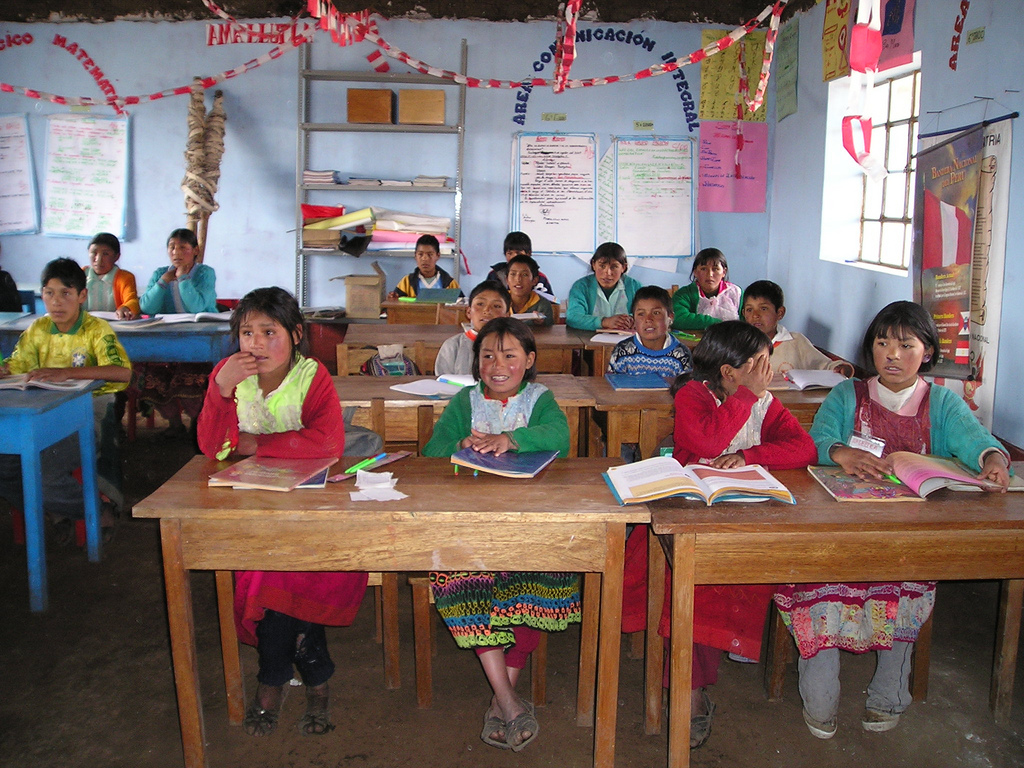 When I visited the classroom pictured above in the Peruvian highlands back in 2004, I noticed that slightly more than half of the students were girls. I remarked on this fact to the human rights activist who was giving us the tour of this Quechua-speaking indigenous community.  He smiled sadly and said, “Yes, but this is fifth grade.  In sixth grade, children go to a lower secondary school that is farther away.  Most of the girls won’t go.  It takes too long to walk there and they are needed to help at home, so the parents won’t let them go.  Besides, most of them will be married soon.” Unfortunately, this is a situation that is repeated throughout the world.

In the United States, where education is both compulsory and free, we often forget that the right to education is not meaningfully available in many parts of the world – especially for girls.  The UN estimates that there were more than 67 million primary school-age and 73 million lower secondary school-age children out of school worldwide in 2009.  In addition, an estimated 793 million adults lack basic literacy skills. The majority of them are women.

Since then, I have visited classrooms and asked questions about girls’ access to education in countries on several continents.  This is a photo I took at Buduburam Refugee Settlement in Ghana. 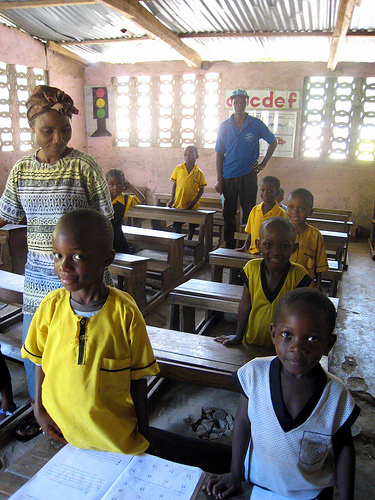 Boys far outnumbered girls in this classroom, illustrating one of the problems for girls in accessing education.  When resources are scarce, parents will often choose to spend the money on school fees for their sons rather than their daughters.

There are many good reasons to ensure access to education for girls, however. Educating girls is one of the strongest ways to improve gender equality.  It is also one the best ways to promote economic growth and development.

“Investing in girls is smart,” says World Bank President, Robert Zoellick. “It is central to boosting development, breaking the cycle of intergenerational poverty, and allowing girls, and then women—50 percent of the world’s population—to lead better, fairer and more productive lives.”

Ensuring equal access to education for all girls by 2015 is part of the United Nations’ Millennium Development Goals, making this issue a major focus of work by the United Nations (for more info, check out the UN Girls’ Education Initiative site), the World Bank and many international non-governmental organizations.   October 11, 2012 has been designated as the International Day of the Girl Child to draw attention to the topic. 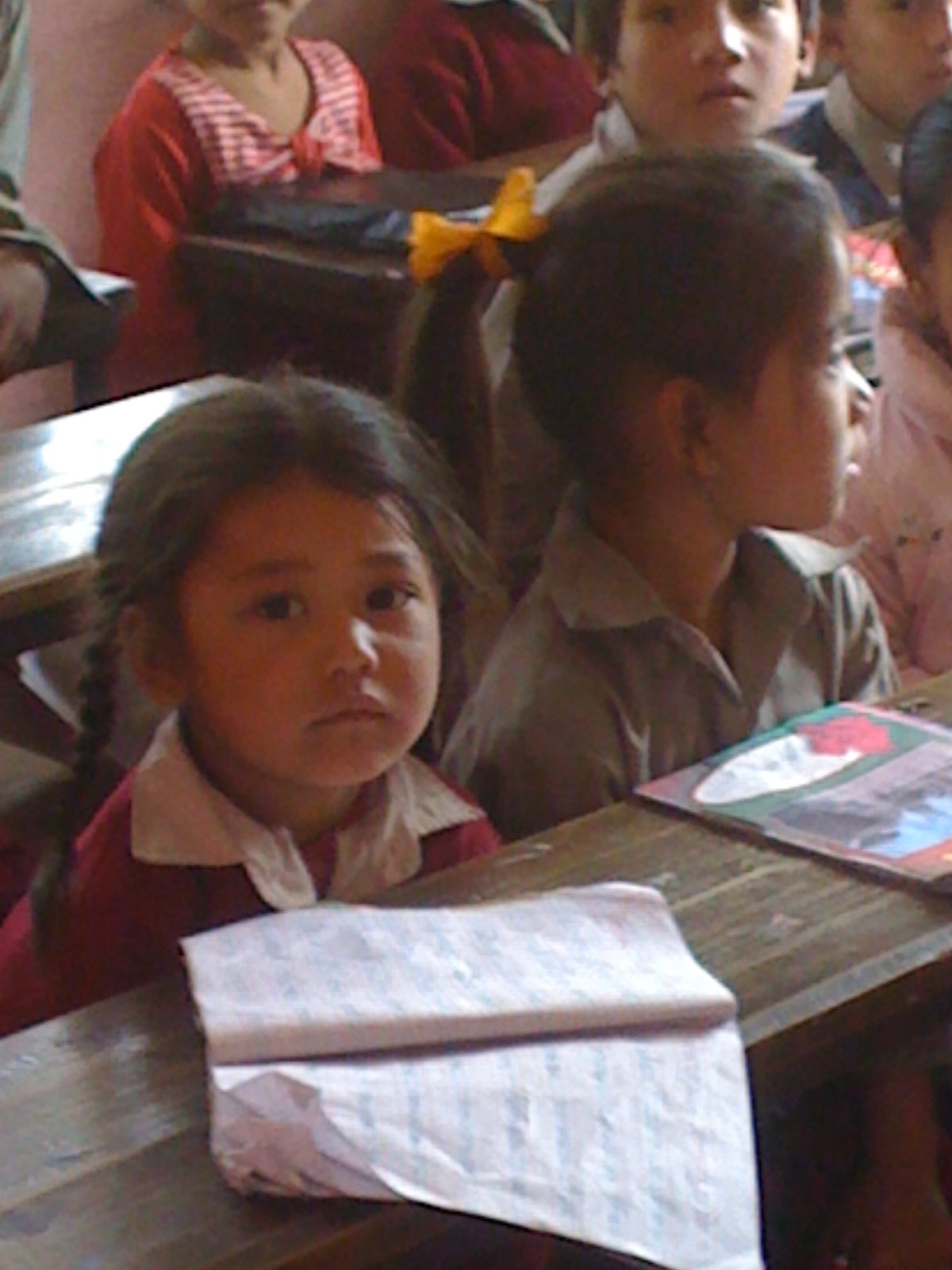 First grade class at Sankhu-Palubari Community School, Nepal
On a much smaller scale, the Sankhu-Palubari Community School in Nepal is doing its part to encourage gender parity in education and  increase literacy rates.  The school works in partnership with The Advocates for Human Rights (the non-profit where I work) to prevent child labor and improve the lives and well-being of the neediest children in this community in the Kathmandu Valley. I’ll be traveling there in January for our annual monitoring visit.

This year, the school has successfully met goals for gender parity among students in both the primary and lower secondary grades. For the 2011-2012 school year, 147 of the 283 students in pre-school through eighth grade are girls. Additionally, and perhaps more significantly, 15 of the 31 students in ninth and tenth grade are young women.

Most of the students’ families work in agriculture.  They are farmers with little or no money to spare on school fees, uniforms and supplies.   Many of them are from disadvantaged groups such as the Tamang.  An indigenous group with their own culture and language, the Tamang students must learn Nepali as well as English when they come to school.  Frequently, the adults in the family are illiterate.
How has the teaching staff managed this success at keeping girls in school?  Since the school’s founding in 1999, the teachers have conducted outreach to parents and worked hard to encourage female students to attend and stay in school in spite of societal pressure to get married or enter domestic work. It took more than 10 years, but their efforts have paid off.  While girls worldwide generally are less likely to access, remain in, or achieve in school, 52% of the students in K-8th grades at the Sankhu-Palubari Community School this year are girls. And a girl is at the top of the class in most of the grades at SPCS.
The impact of the school both on the individual students and on the community over the past 12 years has been profound.  When I was there in March of 2011, we interviewed approximately 60% of the parents of SPCS students.  It was clear to me that parents value the education that their children are receiving and, seeing the value, have ensured that the younger siblings are also enrolled in school rather than put to work.  Twelve years ago, there were many students in the area out of school but now most are attending school. I could also see the physical benefits that the students derived from attending school when they stood next to their parents.  Even the 5th grade girls towered over their parents, illustrating the simple cause-and-effect of adequate nutrition, wellness checkups, and not having to work in the fields from a very young age.
The Sankhu-Palubari Community School may be a small school in a remote valley, but it is a place where the human right to education is alive and well, providing a better future for these children.  In particular, the effect that these girls have on their community, their country and – hopefully, the world – will be thrilling to watch. 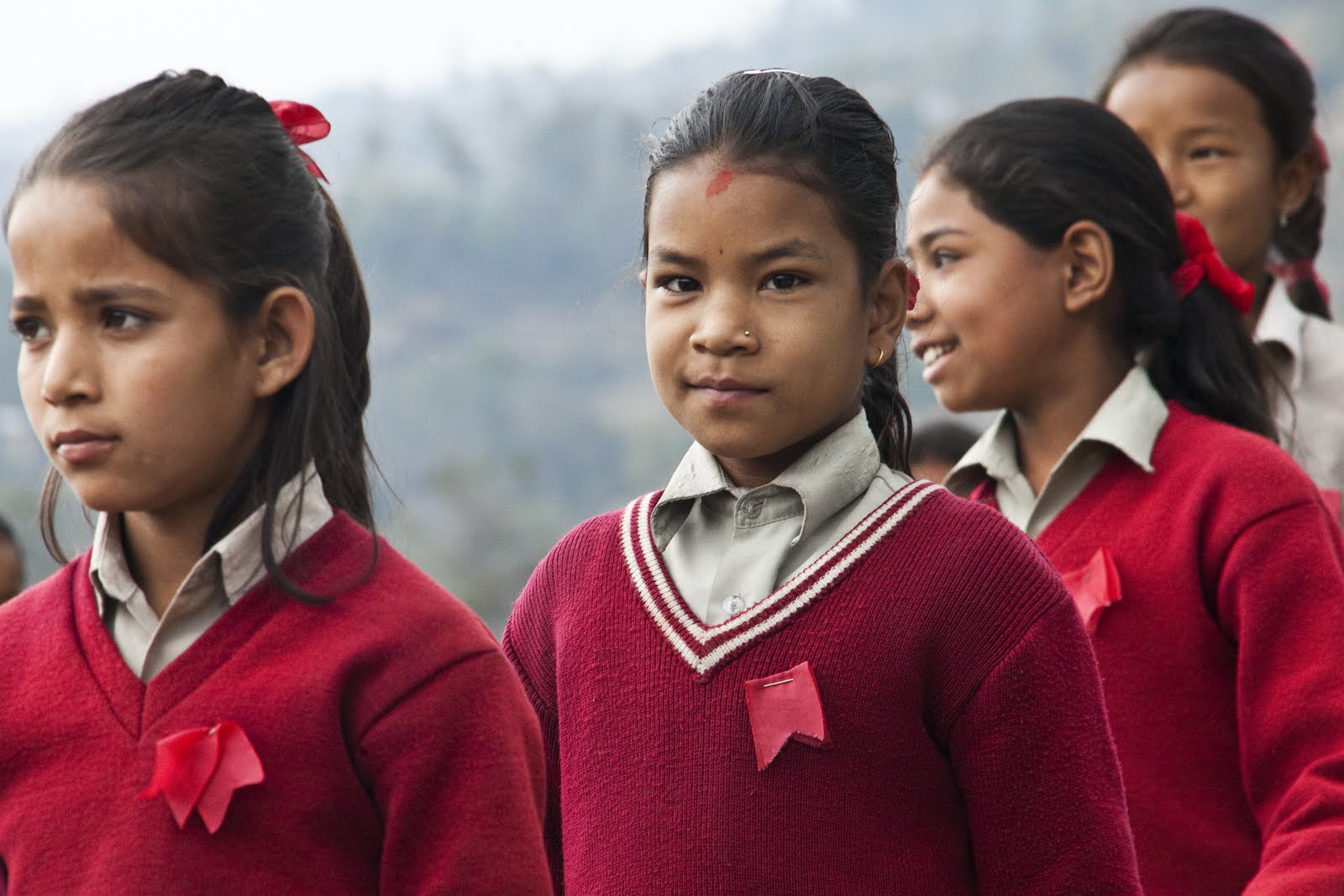 Photo credit:  Dulce Foster
This is an original post to World Moms Blog by Jennifer Prestholdt of Minnesota, USA, who is currently in Kathmandu, Nepal. Jennifer, an international human rights lawyer, can also be found on her on her blog, Human Rights Warrior and on Twitter @JPrestholdt.