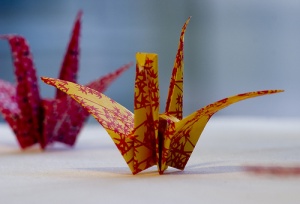 There is an old man who lives a couple of buildings down. He is in no way remarkable, really. I often see him walking his dog or riding his bike to and from the local supermarket.

On Sunday afternoon, though, he transforms.

He is the Kami Shibai, Paper Theater, man. He changes from his everyday clothes, drab blues and grays, into his yukata (informal kimono) and his geta( wooden sandals) and his newsy cap. He looks as if he walked right out of the Yokohama of the 1930s, the pre-war Japan of his childhood.

He makes the rounds of the supermarket, banging his hyoushigi (bamboo blocks) that same echoing sound you hear at sumo matches or on winter’s evenings when the volunteers go around the neighborhood, reminding us of hi no youjin, caution against fire.

He distributes tickets to the children. The Paper Theater starts at four. All good children will receive a present at the end, he says.

And come four o’clock, a gaggle of youngsters have gathered in the corner of the supermarket where he has spread a swatch of carpet. END_OF_DOCUMENT_TOKEN_TO_BE_REPLACED