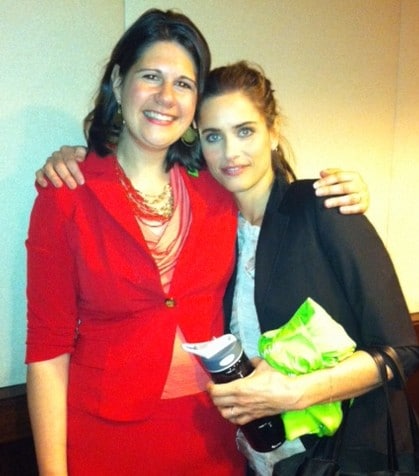 I accepted an invitation from the UN Foundation to open my heart and speak for a larger audience in NYC at the launch of the Shot@Life Public Service Announcement (PSA) on the big Toshiba Screen in Times Square.

Only this time, I’d be speaking next to actress and vaccine advocate, Amanda Peet, World Health Organization’s Dr. Jacob Kumaresen, Real Simple editor Kristin van Ogtrop, Shot@Life’s Devi Thomas, and Toshiba’s Satoshi Kawada. We were up in front of what felt like more than 30 cameras flashing, including video cameras from CNN and Fox News.

With the group of all stars prior to launch of the Shot@Life PSA in Times Square, May 11, 2012.

I am so pleased with how far the movement has gone in so little time.  The world renowned photographer, Anne Geddes, has become a Global Ambassador for the campaign. Actress Amanda Peet is the Every Child by Two Ambassador to the Shot@Life campaign. The amount of Shot@Life “Champions” has been snowballing.  There were over 90 events around the U.S. during World Immunization Week this past April.

And parties and fundraisers initiated by World Moms Blog editors have raised over $2,000 to help immunize over 100 children in the developing world!!

Actress Amanda Peet was interviewed on Piers Morgan’s CNN show about the Shot@Life campaign on Friday. Also, Devi Thomas, Director of Shot@Life, and Aarron Sherinian, VP of Marketing for Shot@Life, were interviewed on Fox News.  It was exciting to sit in bed that night watching the footage on major news channels in the US. I was so proud to be representing World Moms Blog at the PSA launch! Here’s the Fox News Clip!

For the UN Foundation’s official photos from the PSA launch in Times Square, click here.

Shot@Life PSA runs on the Toshiba screen in Times Square NYC for the first time ever on May 11, 2012!

Also, It was fantastic to see World Moms Blog in an article about Shot@Life in Scientific American magazine, here.

It is both, an honor and a pleasure, to be called upon to advocate for global children who need our help.  A child dies every 20 seconds from a vaccine-preventable disease in the developing world.  Immunizations have proven to decrease those numbers and be the most cost-effective solution.

Jennifer Burden, founder of World Moms Blog, advocating to save the lives of children in the developing world through immunization in Times Square, NYC at the Shot@Life PSA launch May 11, 2012.

Advocacy for this movement for children is one of the most rewarding roles I’ve played in life so far, behind becoming a mother. It is empowering to receive strength from the women behind World Moms Blog.  I am brave because of their constant support and ideas. It may have been me up on that TV screen, but this is truly a team effort.

And next on the docket…World Moms Blog has been working on an international documentary for the GAVI Alliance in Switzerland to help raise global awareness for life-saving vaccines.  A team of our contributors has already begun filming! In fact, our contributor, the Alchemist, is hosting a GAVI Global Tea Party in India this week! Our advocacy for children and the mothers who love them does not end.

Jennifer Burden is the founder of World Moms Blog, which writes from 22 countries and has over 50 contributors.  World Moms Blog writes on motherhood, culture, human rights and social good.  She can be found on Twitter @WorldMomsBlog & @JenniferBurden, on Facebook and email worldmomsblog@gmail.com.

Photo credits to Chrysula Winegar with my phone. Thank you Chrysula! 🙂