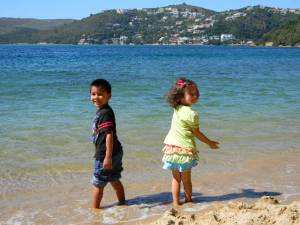 I wish I could say that my path to adoption was an unselfish, altruistic one, but the truth is my husband and I just wanted to be parents…plain and simple.

The “old fashioned way” wasn’t working and after four years of testing, trying and surgeries to find out what wasn’t working, we had an epiphany at an adoption seminar we attended.  The woman who was speaking said her goal  “was to be a parent, not to have a baby.”

Those simple words seemed to make time stand still for me.   That was my goal, too!!  I had put so much pressure on myself to have a biological child, and I felt like such a failure when it just wasn’t happening.  It was like a weight had been lifted from my shoulders.

When we brought our seven month old home from Guatemala, we thought he was the most gorgeous, perfect thing we had ever seen! He fit right into our family so perfectly it was as if he had always been with us.  I quit my job teaching and stayed home to be with him full time, and as he got a bit older, we joined a few play groups.  That was when some of the reality of adoption set in.  END_OF_DOCUMENT_TOKEN_TO_BE_REPLACED