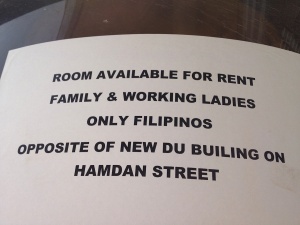 Our kids were playing indoors to beat the heat, and scattered along the sidelines with us were a smattering of dads in dishdashas and moms in abayas, and some other Western parents. No one heard this woman’s comment and she seemed unconcerned about what she’d just said.  I looked at her, trying to figure out if she were joking (she wasn’t).

“I can imagine,” I said. “I suppose somewhere right now there’s an Arab mom saying she doesn’t want her son to marry an English girl, what with her being all independent and wanting to drive and stuff.” (Women in the UAE can drive; I was just making a point.) I smiled, so she’d think I was making a joke (I wasn’t).

Then, when we were driving home from soccer, my younger son said “the thing is that the Arab kids just don’t want to try, it’s like they don’t care.”  And as if there were something in the air that day, at dinner, my older son said “all the Indian kids think they’re so smart, but they’re not.”

It was a veritable trifecta of casual racism, and I wish I could say that it was unusual, but it’s not.  Or rather, I hear these sorts of tossed-off comments in grown-up conversations, but I’m noticing that my kids are starting to mouth the same phrases.

In this cosmopolitan city, where I hear four, five, six languages being spoken as I walk down the street, I’m also hearing my kids be way too comfortable talking about “them.”

Our kids spent their early years in New York, the original melting pot; they’ve always gone to school with people who look, talk, eat, and dress differently than they do. And in many ways moving to Abu Dhabi has helped them (all of us) to deepen our sense of being citizens of the world.

But before we moved here, I don’t remember my kids talk about “those people” are like this, or “they all” do that, and despite (or perhaps because of ) its international population, Abu Dhabi’s stratified society seems to foster these sorts of generalizations. When you look around, it’s too easy to say oh, all white-collar workers are Western; laborers are Pakistani or South Asian; shop clerks are Filipino; and the Ferraris idling at the stop lights belong to Emiratis. Sometimes it seems you could paint Abu Dhabi with stripes of different colors and the colors would never, ever mix.

Abu Dhabi isn’t the only place where racism is a problem, of course, but it’s the first place I’ve lived where people from every demographic seem comfortable talking about “them” (whoever “they” may be).  It surprises me that here, of all places, my husband I have to explain to the kids why it’s a problem to describe an entire group on the basis of one person’s behavior, or even to assume that any group can be described as a single entity.

Us. Them. Such small words but they create such big walls.

I have to say, I hope that woman’s daughter does marry an Arab.

How do you talk to your children about racism, particularly the subtler forms that are sometimes hard to see?

This is an original post for the World Mom’s Blog by Mannahattamamma in Abu Dhabi, United Arab Emirates. Read more at mannahattamamma.